Kitten Rescued By Police Gets Job As World’s Cutest Coworker 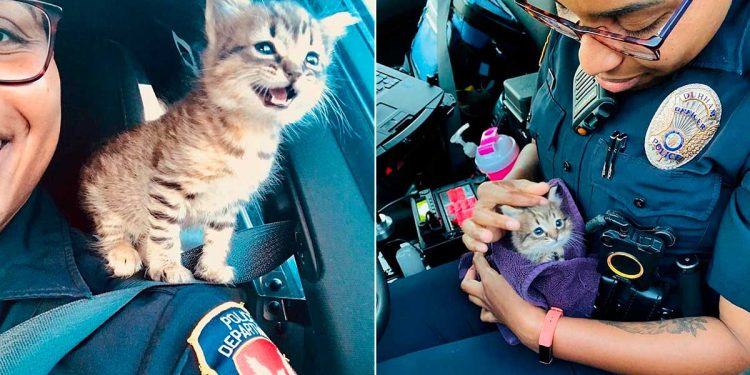 Adorable kitten who was rescued from the streets by the police, after being found alone and abandoned, becomes the best companion

On Wednesday of last week, two officers from the Durham police department, North Carolina, went on patrol like any other day. Little did they know back then that a small emergency would forever change the course of their lives and save the life of a kitten.

While officers JN Rowsey and EL Masnik were patrolling near Dawkins Street and Linwood Avenue, they noticed a small ball of fur that caught their attention. Upon closer inspection, they realized it was a small, lonely, frightened and seemingly abandoned kitten.

The two police officers decided to pull over and help the poor, homeless little animal find its feline mother or possible family and home. Hoping to find her family, officers began searching the neighborhood for a possible mother cat.

After searching for a while, no one claimed the cub, so it became clear that the kitten was alone and had no home to go to.

Officers searched the area to try to find the kitten’s owner or (his) mother, but had no luck.

The police couldn’t leave the kitten to his fate, so JN Rowsey took him to the patrol car and wrapped him in a towel to calm him down. The little kitten was still scared, but he calmed down as the officer held him and gave him lots of petting and cuddling.

Quickly, the kitten came out of her shell and got comfortable with her rescuer; climbed onto his shoulders and decided this was the right place to stay. On the officer’s shoulders, the feline roared its adorable meows, as if saying it was ready to leave the street.

After spending time with Rowsey, the kitten chose her as his new human mother and she couldn’t say no.

The officer fell madly in love with the little tabby cat and decided to adopt him. From that moment he became the cutest companion in the world.

The woman took the little boy to the vet for a general checkup, got him a clean bill of health, and named him Dobby. After testing, the kitten was estimated to be around six weeks old.

According to the officer’s family, this isn’t the first time Rowsey has rescued a kitten. Dobby became her second rescue cat.

What started as a routine stop to help an animal turned into the start of a friendship that will last forever, and most importantly, Dobby will never again have to spend a day wandering the streets looking for food and shelter.