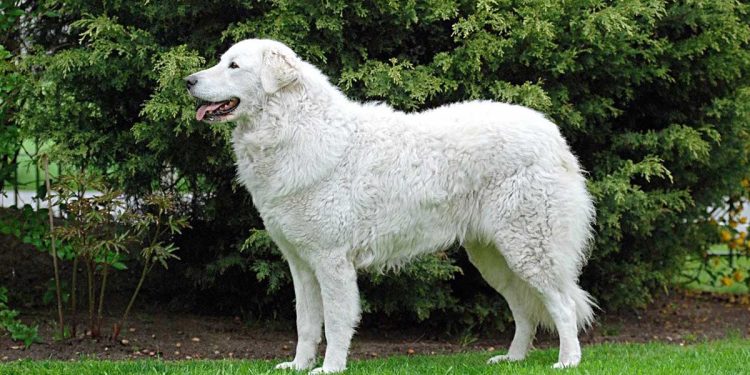 The snow-white giant Kuvasz is the national pride of Hungarians, the dog of Magyar kings and rulers, as well as an excellent defender and devoted friend.

Known for their friendliness, protective instincts, and easy care, the Kuvasz breed can be independent and aggressive. They need a steady hand during training and socialization.

Pictures of the Kuvasz

Description of the breed

The Kuvasz dog is a very intelligent animal. Simply put, if you have an idea of ​​smart and quick-witted dogs, consider a dog of this breed.

These dogs are genetically predisposed to being around people. In their past, for several hundred years, they performed various functions, from hunting to guarding and escorting, but, in any case, they were always engaged in some kind of company.

This can only mean one thing – the Kuvasz does not like idleness, so you need to provide your pet with the appropriate level of activity. We can say that the dog notifies the owner of strangers, and also signals to strangers that the territory is guarded.

In addition, if a person is just passing, the dog will not throw itself over the fence unnecessarily, trying to catch its teeth on the net and splashing saliva. No, the Kuvasz is a noble, self-respecting dog. Therefore, if an intruder enters the territory, he will knock him down and do everything possible to make the thief leave his property forever. And he will do it, too, with dignity.

Children are perceived normally, strangers on the street are ignored, but they watch imperceptibly so that the stranger does not harm the owner. Hunting instincts can express themselves in the pursuit of cats, small animals. Conflicts with other dogs are possible, but the breed does not show unreasonable excessive aggression.

The Kuvasz is prone to the following diseases:

With proper care and maintenance, the Hungarian Kuvasz pleases its owner for 10-12 years.

The coat should be brushed at least twice a week and it is recommended to bathe it 4 to 5 times a year. The eyes are cleaned daily, the ears are cleaned two to three times a week or as needed. The nails are cut three times a month.

The breed was bred to protect herds and territory, so the dog needs space to feel good. It can be kept in an apartment, but subject to long walks and regular outings outside the city, visits to parks where the dog can run freely.

But the best place to keep a dog is a farm or a country house with a large fenced yard. When kept in an aviary, its size must also be large so that the dog can move freely. Also, staying in an open cage should not rule out walks, as kuvas need physical activity.

And it is absolutely unacceptable to keep this proud dog chained up. Captivity negatively affects the character of the animal. A chained dog can be aggressive even towards its owner.

How long does it take to walk with Kuvasz?

Kuvasz are very active dogs, you need to walk with them for about 2 hours a day.

Do the Kuvasz freeze in winter?

No, the Kuvasz don’t freeze in winter, so you can safely walk with them for the allotted time.

Will the Kuvasz get along with a cat?

The Kuvasz get along well with cats, so there will be no problems with their life together.

How does the Kuvasz react to other dogs?

In their territory, they can show aggression towards other dogs, so early socialization of the puppy is necessary.

Is it possible to keep the Kuvasz outside?

Yes, the Kuvasz can be constantly kept outside, this breed is adapted to such conditions.

This big, cute dog is an ancient European breed that has faithfully served people for many centuries as a shepherd and guardian.

Where the kuvasz came from, it is impossible to say for sure, but it has been known since time immemorial. It is believed to have been brought by the tribes of the ancient Hungarians, who used it as a protector against wild animals and thieves. Unpretentious and hardy, later she began herding cattle and helping farmers. In the 15th century, during the reign of Matt Korvinusz, these dogs were court favorites and spread throughout Europe.

They guarded the king and participated with him in the hunt. In the 19th century, the kuvasz was presented at an exhibition and fell in love not only with farmers, whom it still helps, but also with townspeople, who began to keep it as a companion. Unfortunately, World War II drastically reduced the number of these wonderful creatures, leaving only 30 individuals alive in Hungary. But the breed was saved, and now these dogs are very popular again.