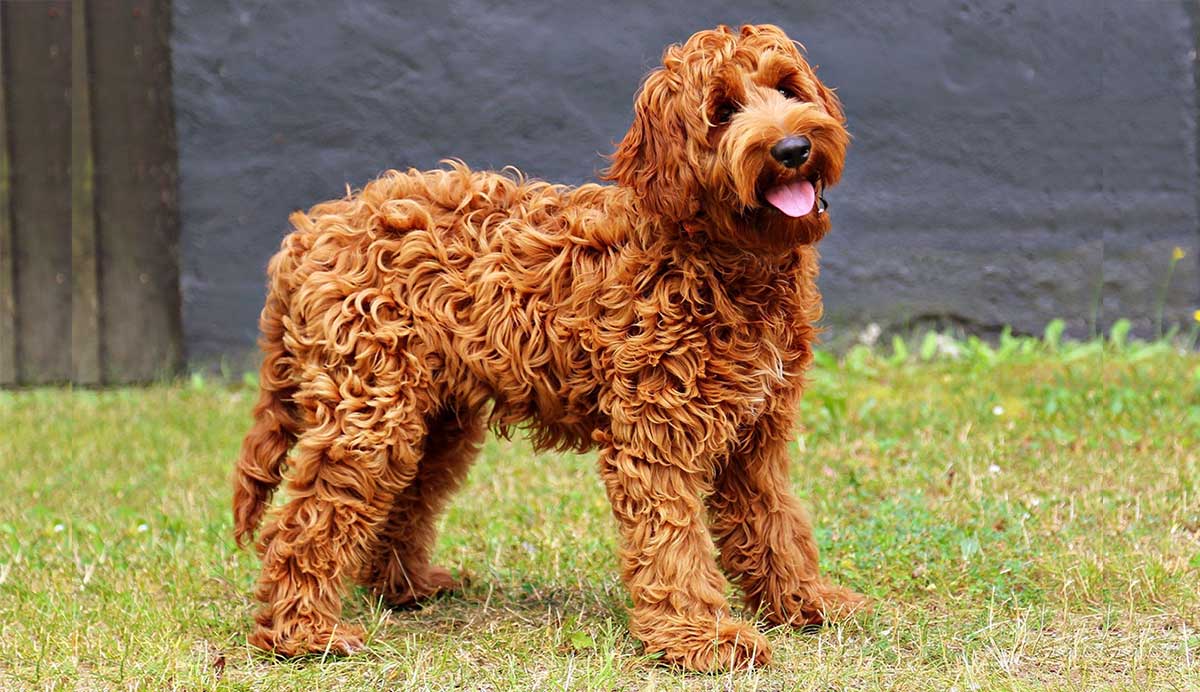 With the appearance of a stuffed animal and an equally sweet character, the labradoodle is the result of the combination of a standard poodle and a labrador retriever. This mixture achieves impressive results, as these mongrels are dogs with a multitude of benefits. They are attentive, affectionate, collaborative and very playful.

The Labradoodle inherited from her parents (Labrador and Poodle) the most valuable qualities. The poodle got a beautiful hypoallergenic coat, and the Labrador Retriever got the perfect character.

Initially, the main purpose of Labradoodle was to serve as a guide dog. Later, the scope of the use of excellent qualities of representatives of the breed expanded.

Now it is a therapeutic dog, a rescue search and dog, a companion for the elderly and just a pet, characterized by endless devotion and friendliness.

Labradoodle development and evolution has been going on for quite some time.

Over the years, breeders still fail to consolidate certain characteristics and establish a single standard for this hybrid dog.

Some representatives of the species are very similar to a poodle, while others inherit almost all the features of a Labrador Retriever. The ideal result is 50 to 50.

At the moment, Labradoodle is divided into two subspecies with regards to the breed type:

It is also worth noting that the representatives of the breed are divided into three different types, with regard to size:

General Description of the Labradoodle:

On a not too long neck, which seems shorter due to a curly coat, a medium-sized head is held.

The skull is wide. The ears are hanging, quite large.

The eyes are rounded, large, dark.

The nose is straight, the nose is large. with well-opened nostrils, which indicates an exceptional scent of doodle.

The back is flat, the lower back is strong, the stomach is slightly matched.

The chest is not too bulky. The limbs are quite long, even with a strong skeleton.

The tail is long, set low. In an agitated state, the dog holds him up.

The coat of the Labradoodle is found in three types:

Due to the good character and qualities of the progenitor breeds, the labradoodle has a personality worthy of admiration. In this way, this dog is known to be an extremely sociable and intelligent, which is not surprising, as the poodle and labrador retriever are at the top of the ranking of the most intelligent dogs. They are also distinguished by their balance and calm.

Aggression is unusual in the labradoodle, he does not participate in dog fights, but he will certainly stand up to protect his owner, since he is distinguished by strong devotion to him.

For the reasons above, the labradoodle is a very family friendly dog ​​because it loves children and likes to spend time with them, take care of them and play. They are also good therapy dogs, as well as recognized and competent guide dogs. They adapt well to all spaces and all companies, being user-friendly for all.

On average, a Labradoodle can live 14-16 years.

The health of this breed is strong, and these dogs do not suffer from the hereditary diseases inherent in poodles and Labradors (deafness, obesity, cataract).

Despite a strong body, the Labradoodle is prone to some diseases:

If we take into account Labradors and Poodles separately, the former suffered from obesity and limb disease, the latter from cataracts and deafness. It is believed that the labradoodle does not inherit the diseases of the parents. But when crossing a cross between these breeds, the possibility of occurrence of diseases inherent in ancestors increases.

A Labradoodle puppy is recommended to be bought at the age of three months. A healthy puppy is playful, not lethargic, has a clean, not dull coat, a cold nose and sparkling eyes, a lively look. The dog is interested in everything that happens around.

The Labradoodle quickly gets used to the new environment and quickly fits into his family’s lifestyle. Despite the lush coat it cannot be kept on the outside.

This is a family dog, it is vital for him to be near people, communication is very important for him. Loneliness is destructive, it affects badly the character of the doodle and his well-being.

This is a great for apartment living. Shedding is insignificant, the coat does not have a specific smell.

A clear positive aspect of the labradoodle is the almost complete absence of molting, which greatly facilitates cleaning the apartment.

Be sure to allocate a place with a couch for your pet. It should be away from drafts, heating batteries.

From day one, buy a collar and leash for your puppy. He must get used to them.

It is important to provide physical exercise to Labradoodle daily. Every day, take the dog for a walk at least two times with the ability to run free without a leash.

One walk lasts at least an hour and a half.

Slow walks will not make it possible to spend the energy accumulated by an energetic doodle. He needs jogging, active games.

Such a dog will be happy to accompany the owner during bike rides, trips to the countryside.

Labradoodle does not require special care. The following are the procedures that will help maintain the health and beauty of the pet:

When compiling a diet for labradoodle, it should be borne in mind that his stomach is difficult to digest liquid food.

Based on this, with a natural way of feeding, make sure that the food is relatively solid, not liquid. Vitamin and mineral supplements are important.

It’s easier to use a method of artificial nutrition. In this case, buy premium feed. They provide a balanced diet.

At 2-4 months, labradoodle puppies should be fed 5 times a day, from four to five months – 4 times a day, from the fifth to sixth months, feeding is set to 3 times a day; when the puppy’s age exceeds six months, he is transferred to two meals a day.

It should be remembered that in the first week after giving birth, the dog does not need to be fed meat: this can result in eclampsia, a certain type of toxicosis, leading to a decrease in calcium in the animal’s blood.

The Labradoodle is a smart dog with a very high energy level, and as such, it must receive the right amount of daily exercise and mental stimulation to be a truly happy and well-balanced dog.

This dog needs a minimum of one hour of daily exercise with as much free time as possible. If it does not get the right amount of mental stimulation and exercise every day, a Labradoodle will get bored quickly and could even start showing destructive behaviors in the house, which is their way of relieving the stress that they feel.

A shorter walk in the morning would be nice, but a longer and more interesting walk in the afternoon is a must. These dogs also like being able to walk around in a back yard as often as possible so that they can really let off steam. However, the fence must be extremely secure to keep these high energy dogs, because if they find a break in the fence, they will escape soon and have all kinds of problems.

That said, Labradoodle puppies should not be over-exercised as their joints and bones are always growing. This includes not letting a puppy jump up and down the furniture or up or down the stairs. Too much pressure on their joints and spines at an early age could cause a dog to develop serious problems later in life.

The Labradoodle needs early socialization, and also teach him the simplest commands and rules of behavior at home as early as possible.

After that, the owner of the dog must decide for himself what course of training his Labradoodle will need. The final decision depends mainly on its further purpose.

The Labradoodle is distinguished by a sharp mind and quick wit. He quickly learns commands and is happy to learn new things.

But having felt the weakness on the part of the owner, he can be cunning in order not to fulfill what he does not like. Therefore, permissible rigor during training is necessary.

It is important that by submitting a command, it is imperative to achieve its implementation.

With a Proper training, a Labradoodle can make a guide, a lifeguard, a bloodhound, a loyal companion.

The Labradoodle is infinitely devoted to his family, not only to one owner, but to all members of the household. It is suitable for people with no experience with dogs, as well as for families with children, for the elderly, for people with disabilities.

A Labradoodle price is very high. In order not to spend money on a non-pedigree puppy, make sure that he has the registration of the Australian Labradoodle Association when buying.

The first recognized labradoodle specimen was recorded in 1955. However, it was not until 1988 that Australian breeder Wally Conron introduced this hybrid breed to the world in his association called “Victoria Dog Guide”, to be guide dogs for the blind. Thus, the objective of this crossing was none other than to obtain a hypoallergenic, affectionate, loyal dog endowed with great learning capacities. From then on, this mix between Labrador Retriever and Poodle began to be known and admired around the world.

Currently, there is no unified breed standard; One of the main reasons is the lack of consensus on the crossings to be made. Many breeders advocate only first-generation crosses, that is to say only between Labrador retrievers and poodles, while others cross labradoodles between them. This made them start to differentiate themselves, being the second known as the Australian or multigenerational labradoodle.

Over the years, many breeders have attempted to develop the breed incorrectly, regardless of parent genetics, inherited diseases or family ties. This caused a huge labradoodle crisis, as many puppies had congenital diseases or nervousness problems due to incorrect crossbreeding. However, other breeders, like Mellodie Woodlye, had all these criteria in mind and decided to develop the breed in a more respectful way, by baptizing it with another name to escape the fame that the bad practices of others had granted to the farmer. This new name was the Australian cobberdog.

Gradually, the breed has been consolidated and, currently, the Australian cobberdog is a breed officially recognized by the Australian MDBA Association.