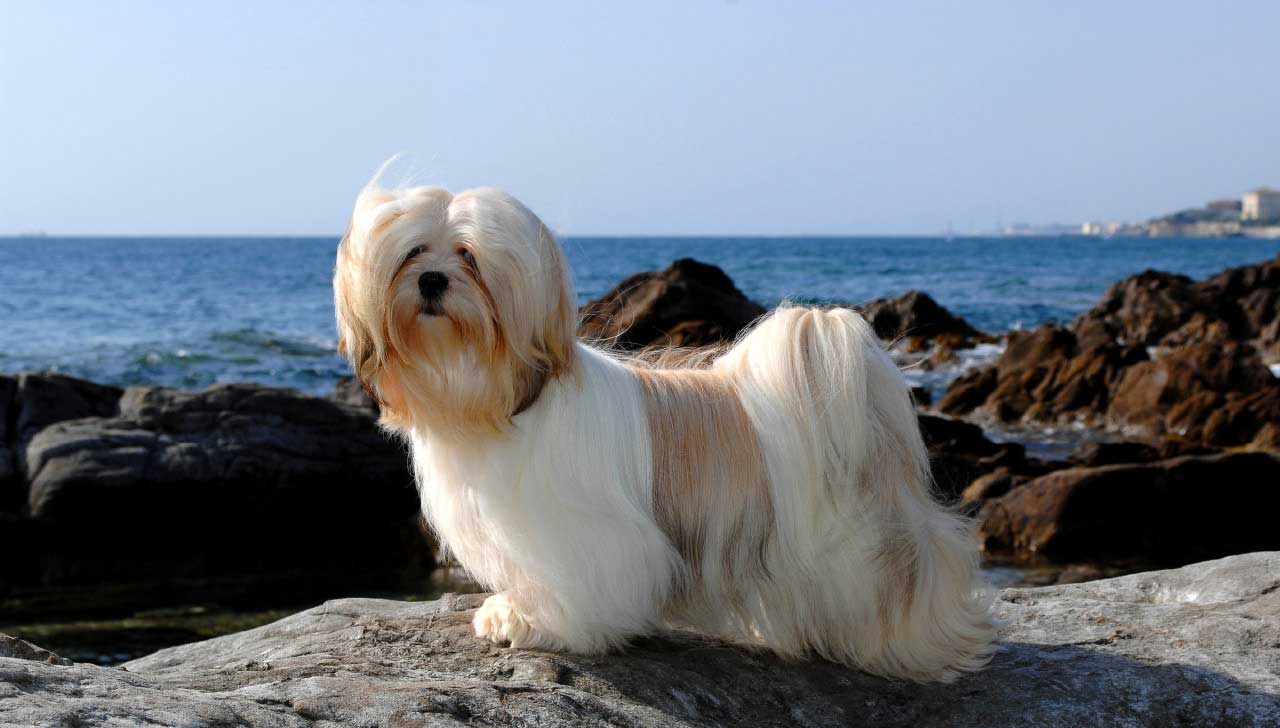 The Lhasa Apso is a small dog characterized by its long and thick fur. This little dog looks like a miniature version of the Old English Sheepdog and is native to Tibet. Although little known, the Lhasa Apso is a very popular dog in its region and it is that, despite its small size, it is one of the guard dogs par excellence.

In this ‘ Pets Feed ‘ breed sheet, we are going to share with you everything you need to know about the Lhasa Apso, a dog that despite its small size has an exceptionally courageous and unique character. Read on to find out if the Lhasa Apso is the perfect dog for you:

The Lhasa Apso breed has an ancient origin. The Tibetan nobility and monks considered the doggie a talisman that could prevent the approach of trouble, but they used it for quite banal purposes – as a guardian of their homes and temples

Some believe that literally the name of the breed lhasa apso is translated as “like a goat.” Even in the 1st century BC, dogs themselves were used to protect herds of fearful domestic goats in Tibet. Others are sure that the name of the breed consists of words denoting its origin and appearance: Lhasa is the capital of Tibet, where this dog comes from, “apso” in Tibetan means bearded. Be that as it may, the Lhasa Apso breed has a very ancient origin. The Tibetan nobility and monks considered the doggie a talisman that can prevent the approach of trouble. But they used the dog for quite banal purposes – as a guard dog, like a Schipperke, for their homes and temples.

Europeans saw a luxurious pet in the doggie. The Lhasa Apso first set foot on this continent in the 1920s when Colonel Bailey brought with him to the UK a gift from the Dalai Lama – 1 female and 2 Apso males. The starting point for the American breed line is 1923, then Sir Sidham Cutting came to the United States with a gift from the same Dalai Lama – a pair (boy and girl) of cute dogs. For a long time, the breed was ranked among the Tibetan Terriers, physiologically similar to the Cairn Terriers. However, in 1965, Lhasa Apso became a separate line in dog breeding.

Characteristics of the lhasa apso

The head of the Lhasa apso is covered with abundant hair, which covers the dog’s eyes and forms a well-developed beard and mustache. The relatively narrow skull should not be flattened, but it should also not be domed or apple shaped. It joins the body by a solid and well arched neck.

The muzzle, short in relation to the length of the skull, is straight and the nose is black. The stop is moderate and the bite is in reverse scissors (the upper incisors close just behind the lower ones). Lhasa apso’s eyes are oval, medium in size and dark.

The ears are hanging and covered with fringes. The body is small and longer than large. It is covered with long, thick hairs. The upper line is straight and the back is solid. The front limbs of Lhasa apso are straight, while the hind limbs have good angulation. The hocks are parallel to each other. The Lhasa apso has a long, hard, textured coat that covers its entire body and falls to the ground.

The most popular colors of this breed are gold, white and honey, but others are also accepted, such as smoke, dark gray, slate, multi-color, black and brown. The tail of the Lhasa apso is high and the dog carries it on the back, but not in the shape of a handle. Often folded at its end, it is covered with a thick fur that fringes over its entire length.

The height at the withers of the males is approximately 25.4 centimeters. Females are slightly smaller. The breed standard used by the International Cynological Federation does not specify a specific weight for Lhasa apso, but these dogs generally weigh approximately 6.5 kilograms.

Lhasa Apso is an amazing combination of soft toy appearance and fearlessness, unrestrained courage of a lion. They are so loyal that they can even give their lives for their owners. Experts warn about such a discrepancy between external and mental data, because some owners are not serious about raising such dogs, but in vain.

It is worth noting that the Lhasa Apso themselves do not consider themselves small dogs and can show character. It is important for the owner to prioritize in a timely manner and secure the role of a leader. This will solve many problems and make the pet as accommodating as possible. These dogs are distinguished by enviable patience, which helps them a lot in contact with younger family members. The pet will endure, even if it hurts from the child’s actions.

The dog demonstrates its good attitude towards guests with restraint, just being present in your company. And if the owner makes it clear that the guests are his friends, they automatically become friends of the Lhassa Apso.

Lhasa Apso dogs do not tend to stormily meet guests, but they also do not mind being in a large company. And if the dog realizes that those who have come are friends of his master, then he includes them in his list of friends. For many centuries, performing the function of a guard (in their homeland they are still used for this purpose), dogs have not lost their vigilance and caution. It should be noted that when strangers approach, they will bark loudly and loudly.

They can feel good at any temperature and there is no need to provide a pet with a particularly soft bedding either. In this regard, pets are unpretentious. Dogs are highly mobile and active. They can play with a ball or a cymbal tirelessly for a long time. That is why it is desirable that the family has children who are able to frolic with their pet for days on end. Both will benefit from this.

Lhasa Apso can be easily taken with you, as they easily tolerate transportation, and changes do not stress the dogs. They are highly adaptable to new conditions. Thanks to the sensitivity and insight, Lhasa Apso, with special training, is an excellent guide for people with visual impairments or lack thereof. The pet does not like to be alone, and when the family is at home, they want to be in the center of everyone’s attention.

Lhasa Apso has an iron patience. It manifests itself especially well in communication with children. Even if the child accidentally hurts the apso, the dog will not bite or scare him with loud barking.

Here are a few diseases that the Lhasa Apso breed is prone to:

Dog grooming will definitely be required. It is necessary to regularly examine his eyes, ears, teeth. And, of course, its luxurious, long coat deserves special attention. Prospective owners should be aware that low tear production is normal for the Lhasa Apso. This is especially evident in puppies, as their fur grows intensively, which can irritate the mucous membranes of the eyes. To avoid this, you should do your pet’s hairstyles, removing the wool, or cutting it.

It is also recommended to rinse the eyes using a cotton pad and warm boiled water. But tea for these dogs is not suitable. It is necessary to remove the hair from the inside of the auricle, it can also be trimmed or plucked with tweezers. The ear is cleaned of sulfur and dirt with a cotton ball. Lhasa Apso often produces tartar, so you can give your pet sugar bones with meat and veins or special treats.

Important! As soon as the dog’s claws began to rattle on the floor, it is worth cutting them off.

If the Lhasa Apso does not have the opportunity to take long walks on the asphalt and dig the ground every day, then claw cutting becomes the owner’s task. The coat of the Lhasa Apso does not shed and has no odor. It must be combed every 3-4 days. You will have to wash your pet every one and a half weeks, using detergents suitable for long-haired dogs. With such care, the pet will look well-groomed and beautiful.

The adult Lhasa Apso dog needs at least half an hour of exercise a day. He is overflowing with energy; he is also happy to play at home or to walk several kilometers.

Important! After each walk, you should examine the dog’s skin. Parasites should not be allowed on the body; the Lhasa Apso is very sensitive to them.

In case of improper nutrition in Lhasa Apso, first of all, the quality of wool will deteriorate. Experts recommend choosing ready-made diets for small breeds. The number of meals for an adult pet should not exceed three times a day.

With natural feeding, it is worth giving preference to natural products without chemical additives. In Lhasa Apso puppies and adult dogs, fermented milk products and cottage cheese must be present in the diet. Also, the Lhasa Apso needs vegetables and fruits (which are not acidic). Sweets, salinity, smoked meats should be completely excluded from the diet. Potatoes and baked goods are also included in this list; in Apso, they can cause diabetes.

Therefore, it is worth consulting with the breeder about their diet, because the dog’s menu should be high-calorie and rich enough so that his body can develop harmoniously.

At 8 months old, the young “Tibetan” already looks like an adult.

You should never give, both a Lhasa Apso puppy and an adult doggie, sweet, fatty, salty, smoked, spicy, spicy, all kinds of sausages and sausages.

It is good if the owner uses special dry food and canned food for feeding.

This approach greatly simplifies the preparation of a balanced menu.

If you decide that the dog’s diet will be from natural products, make sure that it contains the following:

The Lhasa Apso breed needs training and education, combined with socialization, that’s for sure. Sometimes a dog wants to act in its own way, and you need to give it such an opportunity, of course, not in everything. The fact is that if an animal feels constant pressure and an attempt to deprive it of any opportunity to exercise its own freedom, it will only fight more and more. Therefore, freedom must be left. Although limit it to certain limits.

To do this, the owner must be kind, wise and patient. It is not necessary to arrange too long training sessions for a Lhasa Apso, it is better to manage short, and also to apply commands during the day. In addition, be sure to teach the dog to shut up on command, as the Lhasa Apso tends to bark more than necessary. And remember – this breed in psychological terms matures slowly (up to 3 years), and learns commands and rules of behavior also, slowly.

Important! The Lhasa Apso dog does not consider himself small. His training requires tenderness and a firm hand. But if the owner makes it clear in time who is running the ball here, you can forget about the dog’s obstinacy.