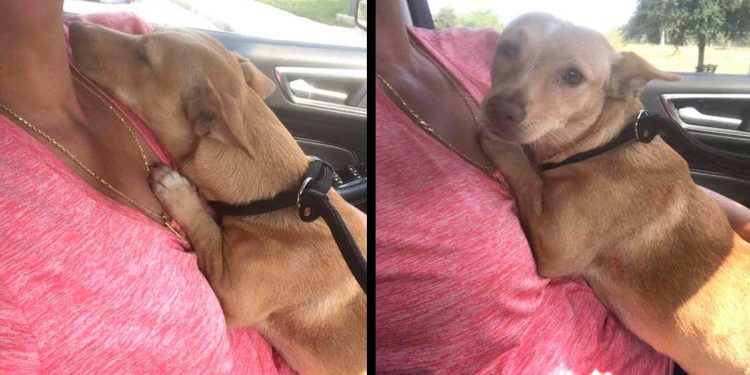 A rescue center volunteer gave her help to a sick and lonely dog ​​from a shelter named Penny, and she in return showed her appreciation with a big hug.

Lia Domingo went to the Augusta Animal Services shelter in Georgia with the goal of rescuing a pit bull named Peety, but she didn’t hesitate to help Penny, a one-year-old corgi mix, as well. After being rescued, Penny wouldn’t stop hugging her and thanking her.

The woman came to this shelter on behalf of The Pixel Fund, a dog rescue group and while she was there, Deborah Kirkland, executive director of the rescue center, informed her about the situation the dog was going through.

Penny had an injured eye and none of the local rescue centers were interested in helping her.

When I saw her, she broke my heart because she was very scared and not very receptive. She was nervous. She didn’t even want to look at me the first day. She just cringed.

Lia loaded the two dogs into her car and began the drive to Sparta, Georgia, to meet Dedee Nystrom, another volunteer who was to take over. But she got a call from the shelter requesting that she return because Peety’s family had turned up.

Going back meant leaving Penny there too, but she promised to come back and not let her down.

Peety managed to meet her family, but Penny was still alone, so Lia went looking for her the next day. This time the dog’s attitude had completely changed, she was no longer afraid, she could not contain the emotion of seeing the woman again.

She just wanted to hug me. She even wagged her tail. And I said, ‘Oh yeah, it’s me, you remember me.

In the car the dog jumped on Lia as if she was trying to give her a hug to thank her, and she stayed that way for the rest of the trip. On her side, the woman was touched by the confidence that Penny had given her.

I had to drive with one hand because she was complaining, as if to say ‘Stroke me, stroke me.

When they reached Sparta, Penny was handed over to Dedee, and she took her to the vet, where they discovered that in addition to her injured eye, she suffered from heartworm disease.

Fortunately, the dog is receiving the necessary care and she is getting stronger and healthier. When she recovers a little more, she may be available for adoption. She also has a new name: Chloe Olivia.

Even though we did not get to save the pit bull … he was put in our path so that we would find out about Chloe Olivia — aka Penny — and save this little girl who is just as deserving of a new family and a new life,” Kirkland said. “In rescue we always say, ‘Everything happens for a reason.’