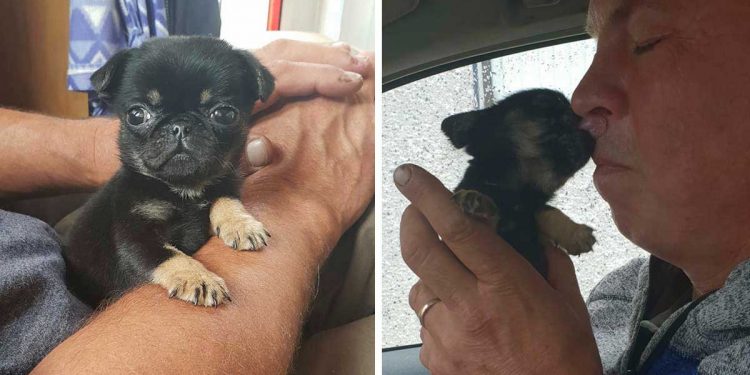 This pup was rescued after being abandoned in a plastic bag by heartless people and her rescuers couldn’t resist her adorable personality.

A tiny puppy was found in a neighborhood in Ireland thanks to a woman who was walking nearby and decided not to ignore her moans coming from a plastic bag on the ground.

The pup now named ‘Bobby’ was only around 5 weeks old, an age when he should be close to his mother. It becomes clear that someone intentionally left him there to die.

Fortunately, the woman immediately took him home and tried to contact a rescue center who could take him in.

Ramona Cunningham, one of the owners of Dog Rescue Coolronan, told The Dodo:

[She] contacted us to help him because he was very ill and could barely walk.

When Ramona and her partner Chris Kelly found out what was going on with Bobby, they decided to pursue him immediately and take him to the vet for a check-up.

The conditions in which this adorable little puppy was found were very bad, but without a doubt he turned out to be a warrior.

He was so weak and emaciated that he couldn’t really stand due to a lack of muscle mass in his hind legs.

Thanks to the care of his rescuers, Bobby began his recovery process and after a few days he showed great improvements. He regained the use of his hind legs and started running and behaving like a happy, healthy puppy.

After sharing his story via Facebook, many people showed interest in adopting Bobby, but his rescuers couldn’t let him go as his adorable personality won them over.

Ramona and her husband Chris decided to give Bobby a forever home. He is a very funny and loyal puppy.

My husband Chris has fallen in love with him, it’s so sweet to see the special little bond they have. Our other six dogs are all female so I think it was about time Chris had someone to its ratings.

Bobby gets all the love he deserves from his rescuers and now adoptive parents, he will undoubtedly become very strong and happy every day.