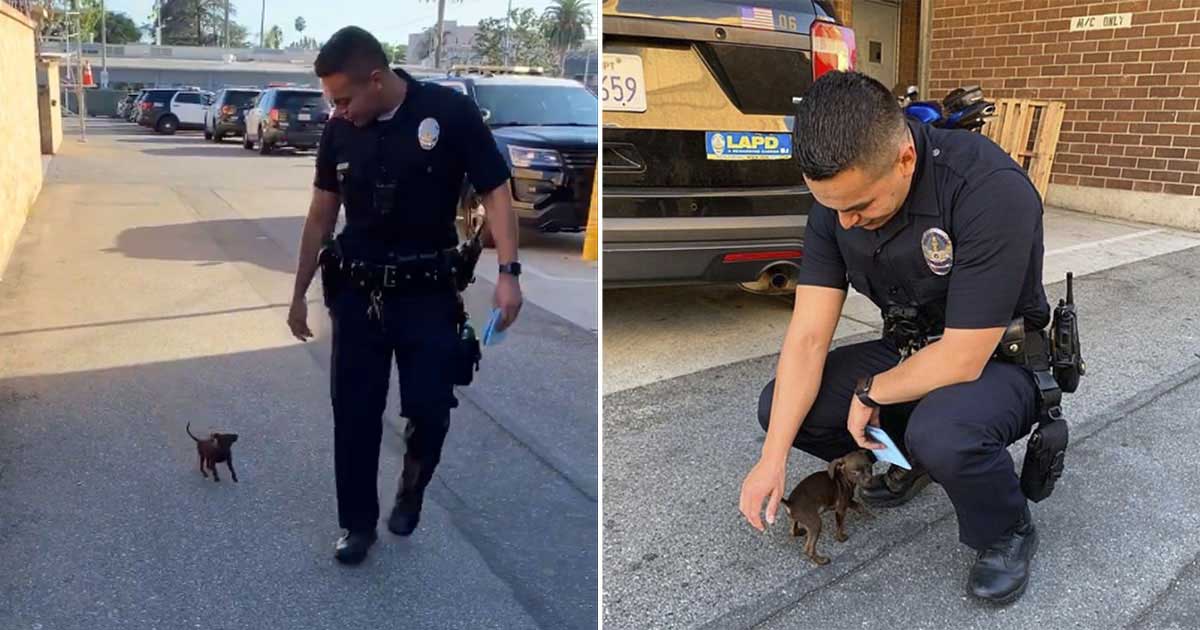 A beautiful puppy that roamed the streets of Los Angeles, chases two policemen who were patrolling the area, looking for help

While two police officers patrolled the streets of Los Angeles, California (United States) they saw a beautiful puppy that had been abandoned along Hobart Boulevard.

The little one tripped over the walls, he was very out of place and didn’t know what to do. As soon as the puppy saw the two policemen, he somehow thought that they could help him and he ran towards them until he caught up with them.

When the Los Angeles police officers noticed the little boy being chased, they knew they had to help and rescue the poor animal.

The little dog was clearly desperate to find someone to protect, love and help him, as he was too young to take care of himself. The puppy quickly approached Officer Mercado; with his little eyes hoping to find help, he picked it up and took it to his patrol.

Officer Mercado and Officer Tavera decided to take the puppy to the station, to present him to the LAPD Hollywood Division staff.

During the trip to the station, the little dog seemed to be very grateful to the policemen, as he could not stop looking admiringly at the rescuers from him. Officers named him “Hobart,” after the street where he was found.

The little boy was very happy and impressed with his heroes. Hobart finally made it to the station and was introduced to all police personnel, everyone was excited to meet the adorable little dog.

The beautiful puppy caused such a sensation that they decided to give him an honorary degree so that he can be trained as a K-9 officer.

New member of our K-9 unit. ‘Hobart’ Welcome to the LAPD!

Hobart loved all the attention received at the station, but he focused his attention and admiration on his personal hero, Officer Mercado, who noticed how much Hobart’s little heart was grateful to him, and a special bond was created. among them.

Fortunately for Hobart, Officer Mercado, in a moving gesture, decided to make him the happiest dog in the whole world and adopted him.

‪Update on Hobart!! A lot of you have been asking what Hobart is up to these days.. you will be happy to know Officer Mercado has adopted him and he is now living the good life with Mercado and his family!!

The bad days in the puppy’s short life seem to be over, he is now getting used to being a beloved child in his new home. Little Hobart is happy to live and share with his own personal hero, and finally has the loving home that he always wanted and deserved.

Hobart is still very young, so he is not yet ready to be trained as K-9, for now he will only have to enjoy having adventures with his father.

Newest member of our K-9 unit 😉Officers Mercado & Tavera found a puppy while on patrol near Hobart Blvd, they took him back to the station and have officially renamed him, “Hobart” Welcome to LAPD Hobart! pic.twitter.com/rWqP8WsRnx

The moving story was shared on the Los Angeles police Twitter account and has touched the hearts of fans.