Affectionate Cat Welcomes Litter Of Kittens Who Needed A Mom 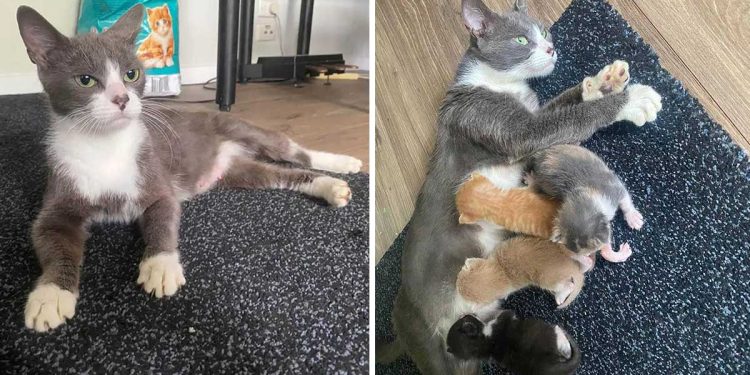 A loving cat who has lost her babies takes in a litter of orphaned kittens and cares for them as if they were her own.

An adorable cat arrived at a veterinary clinic while she was in labor, unfortunately the kittens did not survive and the cat was left distraught. But as fate would have it, the same day a litter of orphan kittens that had been found in a park arrived at the clinic.

The kittens were newborns, so they needed the attention and love of a feline mother. So the clinic staff decided to place the kittens next to the cat, to see if she would accept them.

Luckily, the cat, which they named Venus, allowed the kittens to feed, then started bathing them, as if they were her own babies, and everyone was affected.

So, they decided to take the new feline family to Best Friends Felines, an animal rescue center located in the city of Brisbane, Australia.

Once there, Sarah, a volunteer caregiver, welcomed them into her home to provide them with better care and special care.

Venus was thrilled to have a new home and enjoyed all the soft things around her to snuggle up to.

On the other hand, the kittens had a tough day, as being outside without a mother to protect them took its toll. Thanks to Sarah, who is a veterinary nurse, and the help of Venus, the kittens have always been fed, warmed up and given lots of love to recover.

She is adorable (like her little heart nose) and very caring. He’s doing a great job with these little guys.

After a few days, the kittens began to thrive, and in turn, Venus also began to gain some weight and eat well.

For the first few weeks, Venus mostly took care of her babies from head to toe and provided them with everything they needed.

She always wants to cuddle. After making sure her babies are okay, she walks over and cuddles up on the couch.

She is an overprotective mother, as she always has to check her babies more than twice to be calm and comfortable.

Venus was close to her kittens as they learned how to use their paws, feed, fight with each other, and create tons of mischief. She’s probably thrilled to see them grow from needy little kittens into playful, high-energy cats enjoying life to the fullest.

After spending several weeks in the foster home, Venus has become a more confident and active cat. At first she didn’t know how to act, but she is very motivated and little by little she learns how to do it, and she also dares to try new things.

Over time, the kittens grow and Venus begins to spend more time alone with her keepers to receive more attention.

Venus spends time alone with her foster family and enjoys her new cat friends. Her cute and playful personality comes through.

Without a doubt, this beautiful cat has done an amazing job with her little foster babies, and when the time is right, they will all find their forever homes.

At the moment, one of the kittens has been pre-adopted, but her siblings and Venus are patiently waiting for a family to arrive for them.