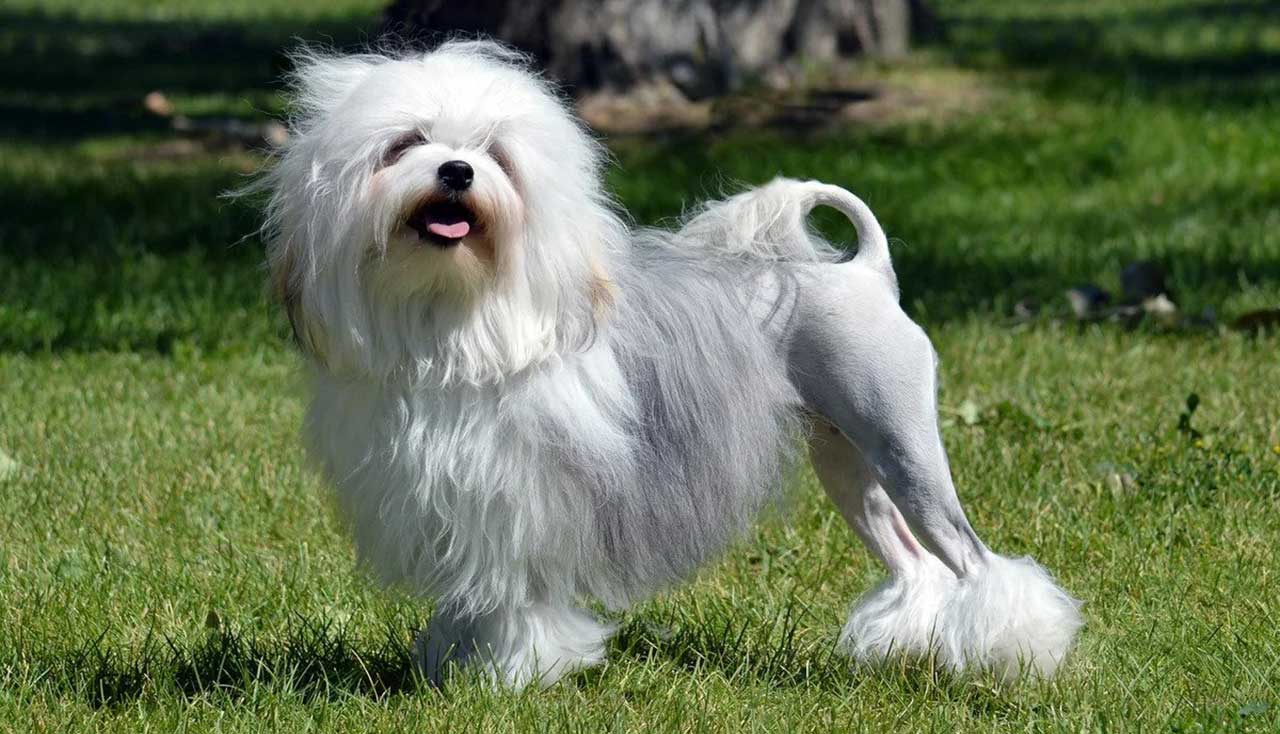 The Lowchen or the little lion dog is a small dog, very friendly and sociable with people. Curiously, the name of little lion dog comes from the haircut typical of the breed, and not from a natural phenotypic characteristic. Although it is not known exactly where these dogs come from, the truth is that the Fédération Cynologique Internationale suggests that they are of French origin.

The lowchen is a very active and intelligent dog considered as an adorable pet for many families. He is a docile and obedient dog, an excellent domestic dog. If you are considering adopting a small lion dog, in this article you will find all the information you will need to know this breed well.

The Swedish naturalist Karl Linnaeus (1707-1778) in his book in the section on dogs called this breed a lion, before him such dogs were called lion’s Maltese. The French naturalist Georges Buffon (1707-1788), describing the lion’s dog among the decorative breeds: he believed that among the ancestors of the breed were the Epagnol (with long wavy hair) and the Great Dane (with smooth hair). In 1817, Dr. Walter noted that the Bichons Maltese, Bolognese and Havana dogs are varieties of the same breed, which differed in their coat structure, colors and hairstyles. Maltese and Bolognese dogs were white, and lion and Havana dogs were of different colors, and even tricolor. It is believed that the lion dog is the product of crossing small barbets (lapdog-type dogs) with poodles.

One of the first images of a Löwchen dog is in the crypt of Saint Firmin in the cathedral of the French city of Amiens (XIV century). The crypt is decorated with two sculptures depicting small lions. Their resemblance to a lion dog suggests that they served as a model for the sculptor. The Löwchen dog is easily recognizable in paintings and engravings, starting from the 15th century – from Dürer to Goya – it is found in many canvases of portrait painters of the Dutch and Flemish schools, such as Lucas Cranach the Elder, Jan Brueghel Velvetny, David Teniers the Younger, as well as on engravings by the French artist Abraham Boss.

Artists often depicted the Löwchen dog in the company of other small dogs such as lapdogs (bichons) and spaniels, which were very popular among the nobility. It is clear that in that era only rich noble people could afford to order their portraits with their favorite dogs. From the pictures we know that among the fans of Löwchen dogs were Madame de Pompadour, Napoleon’s wife Josephine, Duchess of Alba. The merciless fashion, which once erected a lion’s dog on a pedestal, plunged it into oblivion: pugs and king Charles spaniels began to displace lion dogs from the salons of the nobility. By the beginning of the 20th century, Löwchen dogs practically disappeared, or maybe they simply stopped being cut – in their shaggy appearance, they were not much different from other breeds of lapdogs and poodles.

The First World War practically wiped out the once fashionable breed from the face of the earth. However, in the 1950s, the restoration of the French breed was undertaken by Mrs. Bennetiz of Brussels, who collected the surviving single specimens of dogs similar in type to the lion. They were not registered in the studbook, to improve their appearance they were infused with the blood of a poodle. After her death, the work was continued by the German Hans Richert.

After the Second World War: in Europe, only a dozen Löwchen dogs survived, which came from the Richt kennel. The Guinness Book of Records in 1960 marked the lion dog as the rarest breed in the world.

Currently, the breed is found in many European countries, including the UK, where it was recognized by the Kennel Club in 1971. In 1976, Löwchen dogs were admitted to English exhibitions. At the same time, the first Löwchen dog was introduced to the United States. Now in France about 100 puppies of this breed are born annually. The official breed standard is French; its last version was approved in 1995.

Physical characteristics of the Lowchen dog

According to the FCI standard for the breed, the ideal height at the withers varies between 26 and 32 centimeters. The ideal weight, meanwhile, is around 6 kilograms.

The body of this dog is small, robust for its size, with a curved silhouette and a square profile. The upper line is straight, while the back is deep and the belly well raised.

The head of the Löwchen dog is large and relatively short, with the roof of the skull flattened. The stop is moderately defined. The nose is dark brown in brown dogs and black in all other specimens.

The eyes are large, dark, round and arranged from the front. The ears are low, moderately long and drooping. The tail of the Löwchen dog begins just below the line of the back and curves gracefully on the back of the dog, but does not touch it.

In the typical haircut, it has a plume at its end. The coat of this dog is monolayer, silky, long, wavy and dense. In the typical cut of the breed, the hind region of the dog, including the hind legs, is shaved, but a plume is left at the end of the tail and on the feet.

In this way, the appearance of a mane is given and it is therefore known as a lion arrangement. In this breed, all color combinations are accepted.

Affectionate, casual and playful, the little lion dog is an ideal pet. Although he is playful, he can also behave calmly. This girl is very attached to her family and is usually attached to a person, whom he follows most of the time.

It is a fearless watchdog and often alerts by barking if he sees something or a suspicious person. The Lowchen does not seem to care about its small size and will challenge big dogs if it feels the need.

It’s an easy dog ​​to socialize, although you have to start doing it when it’s still a puppy. Well socialized, it usually gets along very well with people, dogs and other animals. Of course, the Lowchen who has had a bad socialization will be shy or aggressive. Among the most common behavioral problems in the small lion dog are excessive barking and holes in the garden.

Fortunately, these behaviors are often avoided (or at least significantly reduced) by providing these dogs the physical and mental exercise they need. Unfortunately, these small dogs are also prone to developing separation anxiety, which is a more serious problem.

It is important to provide them with the company they need, but you must also teach them to be alone without worrying. Dogs of this breed can be excellent pets for individuals and families who have enough time to spend with them and who can cope with the demands of community care.

Although the Löwchen dog gets along well with children, it is not a good pet for young children because dogs are often hurt by rude treatment of pups.

The Löwchen dog does not suffer from specific medical conditions, although he may suffer from typical problems in small dogs, such as eye diseases (such as cataracts and progressive retinal atrophy), joint diseases. However, the Löwchen dog is a healthy breed that does not present any particular problems, with a life expectancy with appropriate care of 12 to 14 years.

Potential health problems can be caused by postpartum eclampsia, hip dysplasia (but not in large dogs) and, finally, if not properly fed, obesity.

The Löwchen dog does not need many daily exercises: it will be happy with half an hour, although it can do more if it gets the chance.

This little dog needs to play and exercise daily, but because of his small size, it does not need a lot of space for that.

Nevertheless, it is important that it walks around every day to socialize and exercise. It is also good for him to have a play time and receive training in obedience.

If the owner has a garden, the Löwchen dog can use it to play, as long as it is not alone, but it has to sleep indoors.

This dog adapts very well to life in the department and in densely populated cities.

Possessing good intelligence, even character, natural attentiveness and the ability to adapt to new situations and people, the Löwchen dog is well suited for life with people with different lifestyles.

The main condition is loving owners who devote a lot of time to their pet.

The Löwchen dog loves to play in the yard and take part in sports activities: the small lion dog is energetic, agile and fast. Without communication and affection, the Löwchen dog literally “goes out” before our eyes, becomes sad, loses its appetite.

The little lion dog should not be left alone for a long time, on the street or in the nursery, this will lead to a deterioration in health. A dog can suffer from separation when their companions go away for the day – a small lion dog is not the best breed for people who spend a lot of time at work.

The Löwchen dog feels good everywhere – be it an apartment or a large estate. Löwchen is good for apartment living. He is quite active indoors, he will be fine without a yard, provided he walks daily. Exercise at least 20 minutes a day.

The peculiarity of the breed is the rolling barking. Therefore, the Löwchen dog is not recommended for homes with noise-sensitive neighbors or owners who cannot appreciate the vocal performance of their energetic and cheerful pet.

Care is done as follows: at the base of the tail, on the paws, on the back half of the body, the hair is cut short; on the body and neck, the so-called lion’s mane is left, as well as “balls” on the tip of the tail, metatarsus and pasterns.

With regard to nutrition, special attention should be paid to meat food. The Löwchen dog is fed with beef, lamb, chicken, rabbits, by-products (liver, kidneys, lungs). Wet canned food can be introduced into the diet from the age of three months. Boiled fish can be fed from one month of age.

From the same age they are given boiled eggs, low-fat cottage cheese, milk. The pet can get the carbohydrates necessary for growth from cereals, black bread, potatoes.

To maintain a good health, the Löwchen dog is given mineral and vitamin supplements. Bones are unacceptable in the diet, since they injure the dog’s gastrointestinal tract, fatty meats, sausages, as they provoke obesity and impaired liver function.

The Löwchen dog is easy to train, amenable to training. He responds to any commands, because he is used to pleasing his master. It is recommended to start training as early as possible, and in the early stages it is very important to teach the dog to stand still for a long time.

This skill will be very valuable during his grooming period. Since the Löwchen dog is mobile, energetic, in order to release its energy, it should be regularly subjected to outdoor games, various exercises, and take daily walks with it.