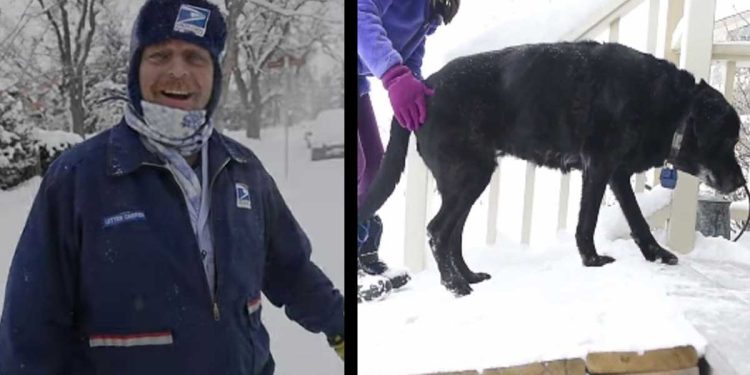 The dog is 14 years old, which prevented him from going down and up the stairs.

Man’s best friends seem to be one of the main enemies of postmen, who day after day usually give the wrong signal to want to invade their homes, so it’s already a tradition that every time the mailman arrives, a chase between him and the dog which usually frightens or alarms the man delivering the mail. But in this case, just the opposite is happening.

Jeff Kramer delivers mail in Boulder, Colorado, and he’s not the classic mailman we all know. Unlike those who usually hate animals and run away from them every time they are about to leave a letter, Jeff not only loves animals, but said one of his great joys at work is seeing 30 or 40 dogs come out to greet him every day.

One of them is Tashi, a 14-year-old dog he met on his post route a long time ago. Since he started working in this town, Tashi has been an energetic young dog who hastily climbed up and down the stairs of his house to say hello to his faithful friend Jeff. But over time, Tashi has aged, which has caused her a series of difficulties in moving and moving around her house, and above all, great pressure to go up and down stairs.

Tashi’s owner, Karen Dimetrosky, said the dog got extremely excited every time he heard the mail truck approaching his house.

He came every day just to pet him. Tashi stayed outside and waited impatiently whenever Jeff came, always trying to push me outside where the mail truck was.

Given this, and on his day off, Jeff Kramer decided to change Tashi’s life for the better and forever. One day like any other, Jeff came to Tashi’s house and with materials he had bought himself, he built him a ramp so he could avoid the complicated and painful process he went through every time he went through. was trying to go up and down the stairs.

Kramer had actually built the ramp for his own senior dog, Odie. But since Odie passed away five years ago, the ramp has been in his backyard. So when Kramer saw Tashi struggling with the porch stairs, he brought all the wood for his dog ramp, handing it over to his friend Tashi, who was having trouble getting in and out of his house.

Let’s hope he lives a little longer.” He’s always happy and that’s what we want, we want a happy animal.