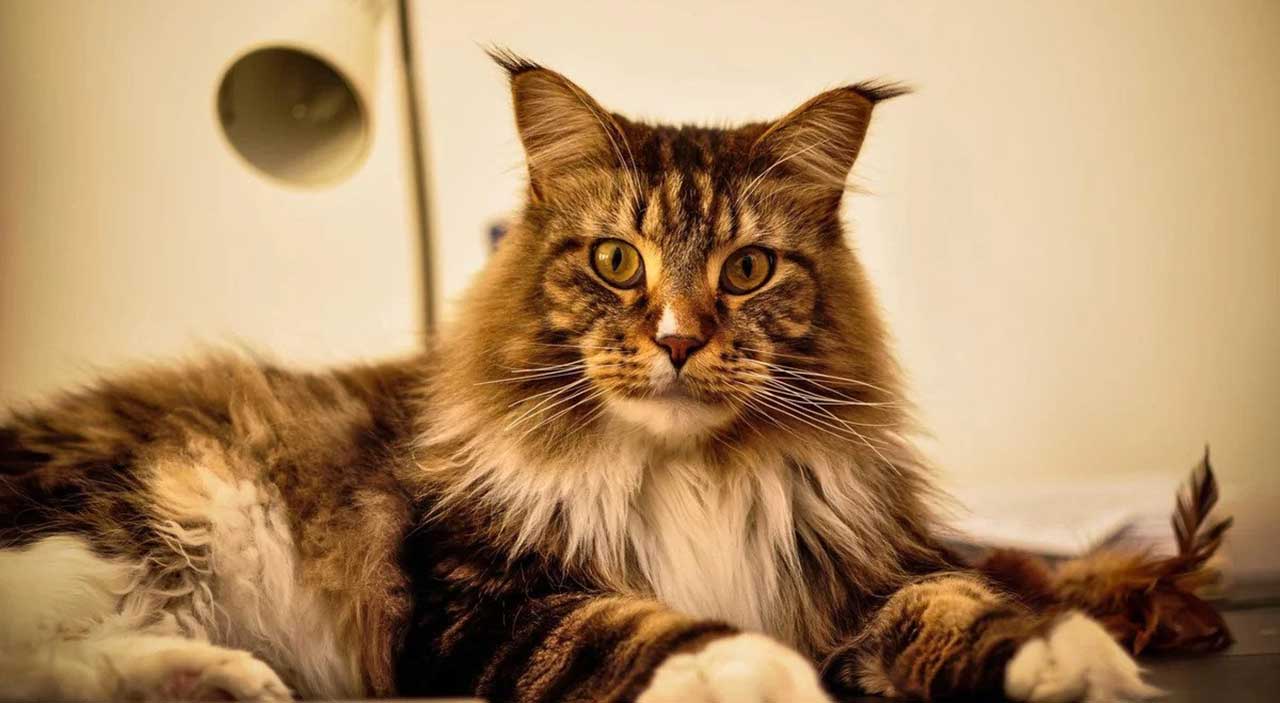 Maine Coon cats are the largest breed of domestic cat and are distinguished by their long silky coats of fur and their sociable personalities. One of the first cat breeds of American origin established by the first settlers, the Maine Coon owes its name to the state of Maine, where its long thick coat and its hunting skills enabled it to survive the harsh winters.

Often referred to as the ‘gentle giants’ of the cat world because of their large stature and friendly temperaments, the Maine Coon is popularly projected as having many ‘dog-like’ qualities.

Here are 10 facts about Maine Coon cats that you just have to know.

1. They Had Jobs Back In The Day

Maine Coon cats look like they are wild cats and as if they were captured and bred as house cats. While this is true, their appearance was not the only attractive thing about them for cat owners. They are also great hunters.

In fact, many farmers used these cats to keep their farm “clean”. That means that farmers used Maine Coon cats for getting rid of mice and rats on the farm.

You probably know that most cats simply hate water. Maine Coon cats, however, love water. There are a lot of Maine Coon cats that enjoy swimming and if they don´t swim they at least play with their water bowl.

To be sure? Go and get a huge water bowl and watch what your Maine Coon does.

When you think of Maine Coon cat, the first color that comes to mind is this tabby color that looks wild and raccoon-like. This is just one color of a variety of colors Maine Coons can have.

4. Maine Coons Are Easy To Take Care Of

You might think that this huge cat with this long hair needs more attention than cats that have shorter hair for example. This is definitely not the case. Besides being pretty laid back and not demanding at all, Maine Coon cats even don´t need a lot of grooming.

So you don´t have to groom your Maine Coon every day. They might have long hair, but they don´t have a lot of undercoat, which makes the grooming easier.

Many cats with long hair are actually pretty thin. The only thing that makes them look huge is the long hair. Not Maine Coon cats, though. They are indeed huge and very heavy. They are the biggest domestic cat and male cats can even weigh up to 10 kilograms (26 lbs).

Their paws and their heads are massive, so are their teeth. Luckily this cat breed is known for being very friendly.

While we are talking about the fur growing between their toes: did you know that back in the days, Maine Coon cats were known for often having more toes than normal?

This was okay for breeders back in the day, because this mutation made the fur between the toes even stronger.

Today this is not accepted anymore and it rarely happens that a Maine Coon cat is born with more toes than normal.

You think that a one-year-old Maine Coon cat looks impressive? Well, then think about this: Maine Coon cats grow until they are 4 years old.

They are indeed already impressive by the age of one, but their appearance can change completely in the next 3 years. There are Maine Coon cats that are almost unrecognizable after they have grown up.

Besides their body, the snout gets huge and it seems like their complete face looks completely different and different means majestic.

8. The Dog Of The Cat World

You have probably heard this before. Yes, Maine Coon cat is very dog-like. Why do people say this? Because they love to play fetch.

Besides that, Maine Coon cat is very affectionate and you can do almost everything with him, they always think it is great because they love you. By the way, they also come when called.

Maine Coon cats are known for being very intelligent. You can teach them a lot of tricks and you might have seen a couple of Maine Coon cats in several movies. Harry Potter, for example.

Because of their intelligence, it is important to make sure that they are not bored as they could get into mischief.

10. Get Ready For Weird Sounds!

You think you will hear mostly meow sounds? Absolutely wrong! The Maine Coon is known for making a variety of weird noises. One of them is the chirping sound that you can always hear when the Maine Coon gets excited.

The great thing about this is that it never gets annoying as this sound is not loud at all.

There is a Maine Coon with a human face in the world. Her name is Valkyrie, and thanks to the similarity with a person, she was able to find a new home. Now she is going to live in Cherepovets.

In the Russian-speaking space, there is a Maine Coon comedian named Boomer. The whole life of the celebrity was covered by Pavel Volya.

Maine Coons are the longest cats. In the Guinness Book of Records, you can find a mention of the Maine Coon, whose body length is 123.2 cm. This is Maine Coon Stewie, a resident of Nevada (USA).

A distinctive feature of the Maine Coon is a “pouch” on the stomach. Some breeders believe it is for kittens or strategic stocks.

Maine Coon paws are very mobile – almost like monkeys. These cats often hold toys with their paws, and also pick up pieces of food with their claws and so send them into their mouths.