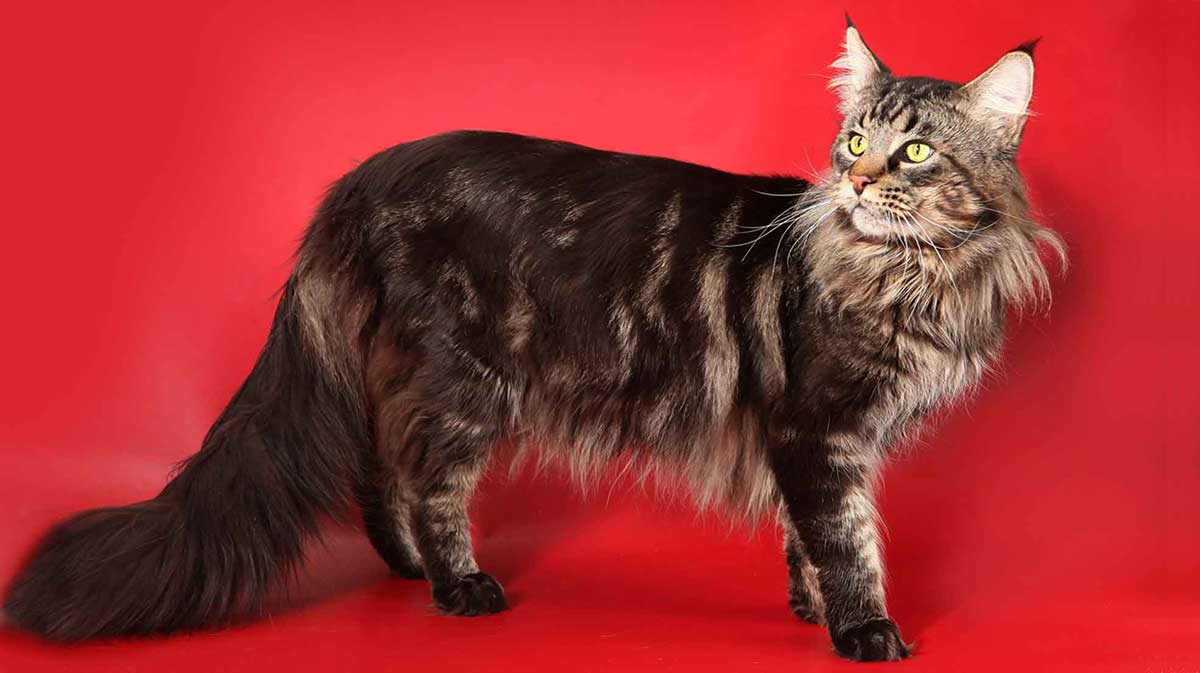 The Maine Coon cat is famous for being one of the largest in the world when it comes to domestic cats. It is a large, robust feline with a docile character. However, because of its peculiarities in terms of characteristics, personality or care, it will be essential to inform us in advance if our will is to adopt one. Known as the “gentle giant” cat, this feline is one of the most popular giant cat breeds.

In this breed sheet of ‘ Pets Feed’, we will share with you everything you need to know about the Maine coon cat, starting with its origins, going through its character and its care and ending with the frequent health problems of the breed, all these details are accompanied by photos.

The Maine Coon is the largest of the domestic cats. The average weight of a male is 5-11 kg, females – 4-8 kg. The length of an adult individual can reach a meter, height at the withers – up to 33 cm. Newborn kittens also weigh quite enough – 125-170 g.

Average weight of a Maine Coon cat by months

The Maine Coon has the typically curious nature of a cat. He is sociable, but at the same time does not need attention, and if you want to spend time with him, he will only be delighted.

Likes to play with puzzles, watch birds from the window and can learn to walk on a leash. The Maine Coon is an excellent choice for those who travel frequently and want their four-legged friend to always be with them.

Oddly enough, but the Maine Coon’s devotion can be compared to the dog. This cat is peaceful and cheerful, gets along well with children.

Maine Coons are inherent in self-entertainment, however, despite this quality, the animal also needs live communication. Therefore, the owner should devote at least half an hour of his time to the cat per day. Maine Coons are sensitive to affection. These cats are alert but not shy. In a situation with strangers, they will favor observation over participation. These animals are highly trainable.

Maine coons get along well with other animals, but don’t like rodents. Domestic predators will reach the latter in any case, even if the cage is far away.

The Maine Coon can adapt to any type of home in any climate. It easily tolerates cold and street life. Gets along well with dogs and cats of other breeds.

It is advisable to visit the veterinarian every 6 or 12 months to carry out a general examination and to detect any health problems. In addition, the professional will guide us to properly follow the cat’s vaccination schedule, as well as the internal and external deworming that we must perform regularly. Preventive medicine is essential to ensure the good health of the cat. Likewise, we must be regularly aware of their behavior, their deposits or the possible expulsion of hairballs, which can be avoided with the use of malt for cats.

In summary, the most common Maine coon diseases are:

With good care and following preventative medicine guidelines, the Maine Coon’s life expectancy is about 9 to 15 years.

Maine Coons have a beautiful coat that requires weekly brushing to keep it in good condition and prevent tangles from forming.

Like other long-haired breeds, the Maine Coon sheds a lot in the spring and fall, so more frequent brushing won’t hurt.

Ears should also be checked and cleaned regularly to prevent future ear infections.

Particular attention should be paid to a quality diet for Maine Coons, so that it meets all their nutritional needs.

The Maine coon is a breed endemic to the United States, especially the state of Maine. It is estimated that around 1850 long haired cats arrived from Europe and Asia, which mated with local short haired cats, which resulted in large, long haired and construction cats robust. Its ringed tail reminded that of raccoons, for this reason, it is known as “coon”, short for raccoon.