Thanks To His Best Friend, The Dog Finds Joy After Losing His Sight 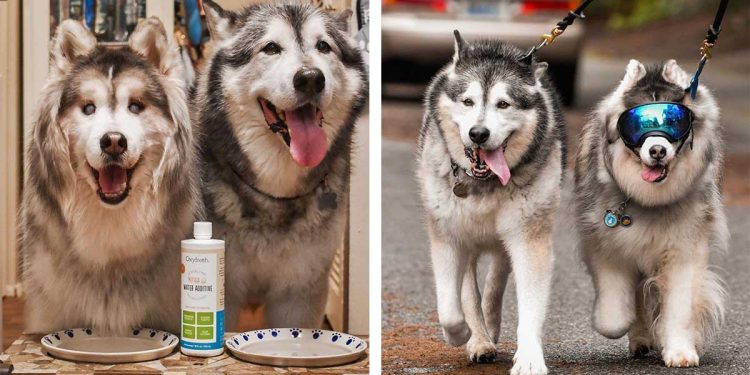 Siberian husky Sterling, 11, was diagnosed with glaucoma and lost his sight about three years ago. After a more depressing time, his best friend, the 10-year-old Alaskan Malamute, was tasked with bringing some color back to Sterling’s days.

Owners Lillian and Mark McKee, from Seattle, US, told the Daily Mail that after Sterling’s diagnosis they fought for a year and a half to try to save the dog’s sight, resorting to six treatments , four times a day. Despite everything, surgery was ultimately the only way to preserve the animal’s eyes.

Shortly after the procedure, Lillian claims the husky became very down, depressed. However, a trip to the beach in Walker’s company was enough to revive Sterling right away. “We found that continuing with his favorite activities like running, long walks and going to the beach really helped him stay as energized as before,” says the tutor.

Sterling and Walker were adopted separately from an event for a northern dog shelter hosted by Lillian. Adopting Walker wasn’t in the cards, but when his former owner was no longer able to care for him, the dog immediately became part of the McKee family.

Since then, Sterling and Walker have become inseparable, despite their different personalities – while the husky is a “distinguished gentleman”, in Lillian’s words, and enjoys socializing with new people, Walker is “the court jester”. Additionally, Sterling has a more bossy temper and is glad his friend obeys him.

“They walk and run together, sleep side by side and eat within two feet of each other,” says Lillian. The owners believe that part of Walker doesn’t even realize Sterling is blind, such is their company even after the husky loses his sight.