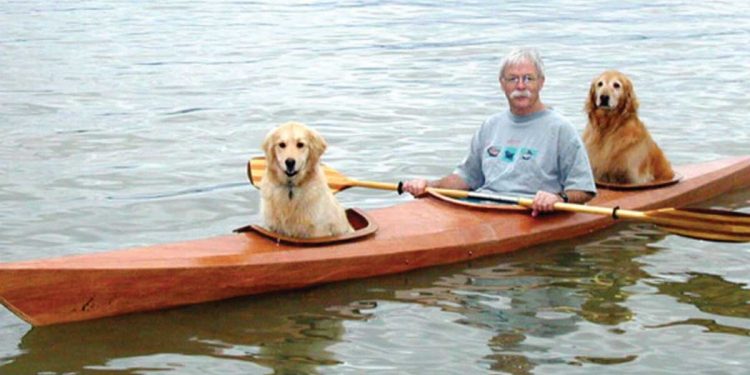 A man built a custom kayak with two extra holes to take his dogs every trip with him, the idea was a success.

David Bahnson is a former orthopedic surgeon who lives with his family in Vermont, USA. He built a custom kayak so he could take his dogs on his outings as his dog Susie liked to accompany him. From her first outing to practice windsurfing, the Golden Retriever breed dog was delighted and did not stop kayaking with her father.

Shortly after, David and his wife adopted another dog and the man was quick to make further modifications to his Kayak so that new member Ginger would accompany him on their walks with Susie.

When we had Ginger, I just put another hole. It’s like a triple kayak, except there’s not enough room for paddlers to put their feet up, but it’s perfect for a dog.

He built a custom kayak to take his dogs on adventures

For David the safety of his pets was paramount so he trained them to climb on their own and they had to learn not to jump in the water at all times which wasn’t difficult as both dogs loved to be indoors with their father.

The man was always very careful and despite the safety of the kayak, he tried not to reach deep water and his dogs could only jump on the shore when he gave them the order.

They are trained to get into the kayak on their own. They sit down and we leave. When we get ashore, they sit there until I tell them they can come out. They never actually jump in the water.

Sadly Susie and Ginger passed away after a great life with their family, now David and his wife Linda have new dogs and the tradition of custom kayaking continues.

I love my dogs. I love training them, the company. We’ve traveled miles and miles paddling our dogs. They just love going places.

Not all pets can do these sports, they must be trained like David did with his Golden Retrievers, and in some cases they may suffer from dizziness or not enjoy the trip due to anxiety ; Luckily for David, his dogs are enjoying the water.