Man Who Did Not Plan To Have A Cat, Ends Up Finding 5 In His Room 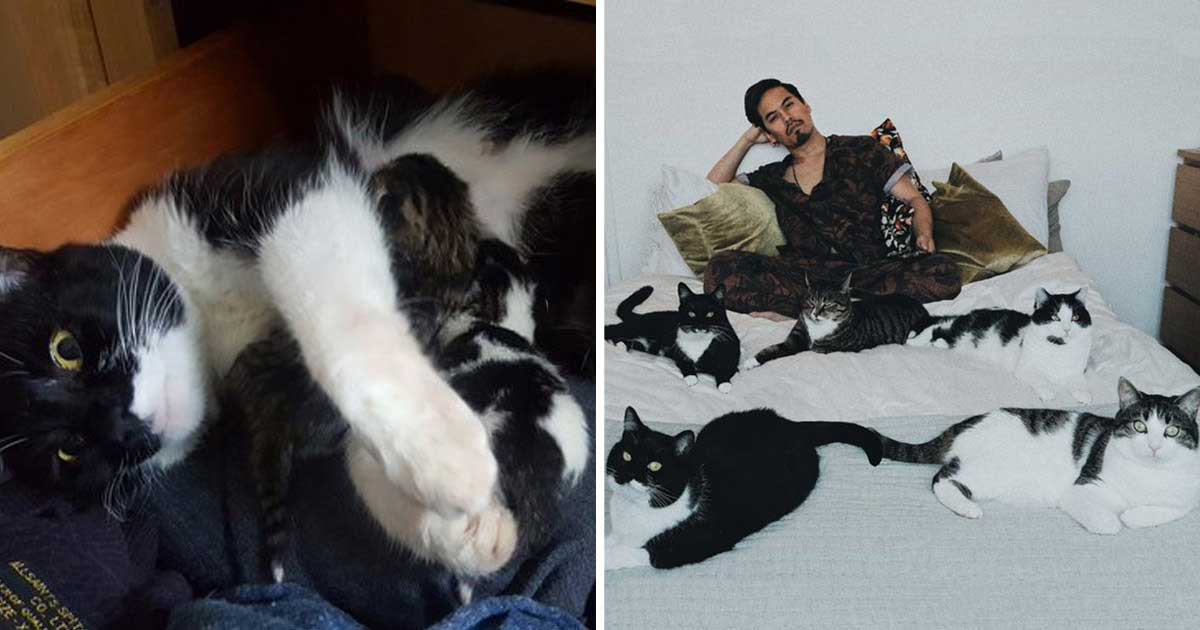 The moving story of a man who did not plan to have a cat as a pet, but who unexpectedly ended up being the human father of a litter of 5 kittens, has managed to steal the hearts of people on the Internet.

It all started about three years ago, when young Paris Zarcilla entered his room to put on a sweater and was surprised. Under his bed there was something that was moving, Paris checked and observed something curled up, it was a homeless cat that had sneaked into his apartment.

The incredible thing was that the cat was not alone, apparently, she looked for the young man’s apartment as a refuge to give birth to 4 cute babies.

Man, who did not plan to have cats adopts five

I just found a cat that is not mine and she has babies under my bed.

At that time, Paris had no intention of having pets, but something in him changed and he began to take care of the little family. Although the man could have taken the feline family to the nearest shelter, he did not want to, as he fell in love with kittens.

Soon, Paris welcomed her new pets and shared the pleasant news on Twitter, and the great adventure began.

The paternal instincts are kicking in. I am overwhelmed by feelings. I do not know what I am going to do.

The young man did not know where the kitten had come from, but he was sure of something; he chose the best place in London to have his babies.

The news of Paris touched the hearts of many Twitter users, and little by little it was gaining much attention on social networks. As Internet fame grew, his love for kittens also increased, he was delighted with the new role of father to him.

Since then, Paris has been posting photos and updates of his beautiful feline family on Twitter, so people know how they are.

In the publications you can see the kittens prowling around the house, playing, sleeping, eating, exploring, among other things. But, without a doubt, one of the most relevant publications occurred in May of last year, when Paris celebrated the kittens’ second birthday.

Last Christmas he would not be left behind, as the young man also showed the different Christmas activities that he carried out with his loved family. Although at one point Paris felt that he could not take care of the kittens, thanks to the popularity on the Internet, people began to donate.

I was amazed at the generosity and kindness of strangers.

There was even a GoFundMe campaign to help the family, but it quickly had to be canceled because people gave more than expected.

The most curious thing is that apparently the kittens appreciated the cardboard boxes of the parcels more, in the end they are outgoing cats.

It’s been almost three years since the cat appeared in Paris’s life, and things have never been better.

The kittens have successfully grown up alongside their feline mother and human father, and they truly are a very happy and loving family. According to Paris, the kittens have taught him to be a better person and he still continues to learn many life lessons from being around them.

As soon as I decided that I was going to keep them, I knew that my life would be different forever. The company of animals is really good as they say.

Although Paris did not plan to be the father of five cats, he now cannot imagine a life without his beloved feline family.