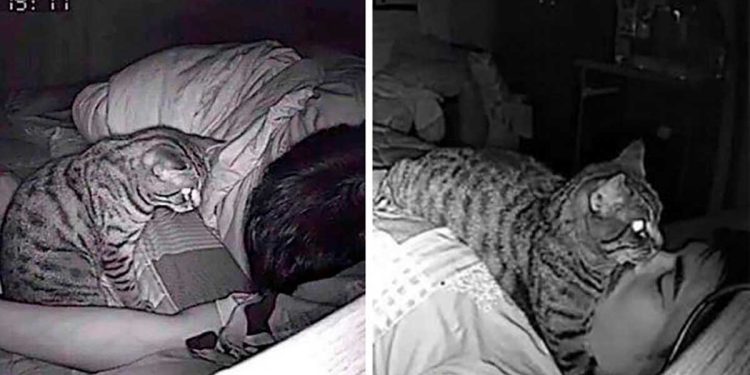 Lomphonten Lomphontan is a young Thai man who loves spending time with his tabby kitten named Achi. One day, Lomponten was curious about what Achi was doing in his sleep, so he decided to install a hidden camera.

It was amazing for him to see that Achi had the most epic cuddling sessions; he is so cuddly. The camera is still in the house when the boy goes to work to monitor what Achi is doing, but it never occurred to him to check what was recorded at night.

In the footage, you can see Lomponten sound asleep and Achi in action taking the opportunity to be by his side.

The feline climbs on his chest and with his little paw confirms if he is sleeping, then drops his body directly on the face of the young man.

Lomponten hadn’t realized what was happening until he saw the footage, his choking dreams suddenly making sense.

I sat and watched [the video] one night. It was very funny. I feel very in love with him because he loves me like that.

This boy has no intention of doing anything to curb his kitty’s affectionate behavior, knowing now that his desire is to be as close as possible to the person he loves the most in the world.

It’s a show of love.

The footage was shared on Twitter and people’s reactions were immediate.

They’re all dead cute and it’s pretty funny too.