This Man Lives With 9 Rescued Animals And Keeps Adopting More 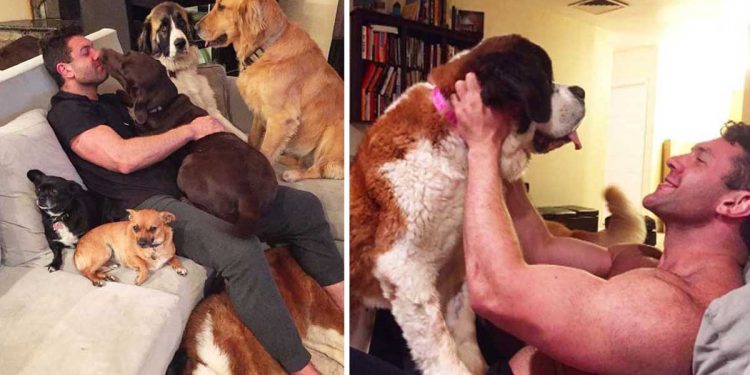 Lee Asher has always had the beautiful vocation of helping homeless animals, which is why he now has a special and furry family made up of 7 dogs and 2 cats that he loves with all his heart.

Lee Asher resides in Los Angeles, California with a special family. This man lives with 9 rescued animals and loves them all equally. He always had the beautiful vocation of helping animals and that is why he saved 16 of them in his whole life. When he was little, he spent a lot of time in a shelter near his home to learn about the rescue process and the people involved.

I always knew that when I grew up I would have a house full of rescued animals, so seeing where I am now is no big surprise to me or anyone who has known me from a young age.

Inspiration comes from loving dogs and knowing that not only are you saving a life, but by saving a dog, you are also enabling other rescued animals to be adopted. He’s a winner -winner and a nice feeling.

Currently, Asher lives with seven dogs and two cats, the dogs are named: Yaffa, Molly, Cali, Bo Bo, Butters, Haven and Lillie, while her cats are named Whiskey and Goose.

It’s constant entertainment and I’m so grateful to have a home filled with love and dog fur.

He always managed to help these animals, Butters for example was abused by a cruel person who tried to sell him when he was just a puppy and Lillie was found sleeping in the mud behind a trash can, she was also suffering from seizures.

She was a mess but I knew she was special, I could see it in her two lazy eyes. She had to wait three long weeks before she was available for adoption. I loved visiting her three to four once a week and say, “We’re going to have a great time when you get out of here.

This man spent an entire month trying to control Lillie’s terrible seizures and finally managed to get an effective medication that controlled her seizures for nine months, now she can live without this medication.

As I promised, we’re having a great time.

All the animals that live with Asher have different characteristics, some of the dogs are huge, some are small, old or young, but they have one thing in common and that is that they are extremely loved by him. They are this man’s best friends, they are not just pets.

Cali and I have some pretty deep and intense conversations late into the night.

Asher and his furry crew sometimes have small arguments like in any relationship, like when Bo Bo destroyed his couch.

Do you know how hard it is for me to find a sofa that I will see myself with for the rest of my life? I swear I had this sofa for less than 24 hours. Bo Bo broke this thing before so I can eat a bowl of cinnamon toast on it.

After what happened, Asher and Bo Bo talked and worked things out like best friends.

Some people find the idea of ​​living with so many animals a little crazy, but for Asher, it’s completely normal and fascinating. He tries to spend time alone with each of his furry friends.

I usually take two or three dogs with me everywhere I go. Sometimes I feel like they need alone time with me, so that’s what I give them. I see a big difference in their behavior when they spend the day alone with me. They really love it.

Asher is living one of his biggest dreams, to live with lots of animals who love him and whom he loves with all his heart.