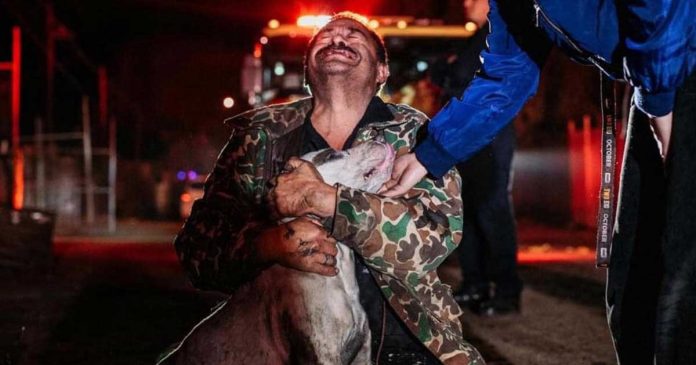 Despite losing everything in a fierce fire, this man only cared about the life of his best friend, a dog who has been his company.

A sad and moving story was known on different social networks on January 7, when this 56-year-old man, resident in Mexicali, Baja California, a voracious fire consumed his home, but far from the material what really mattered to him was his best friend.

The man known as Don Mario, has a hearing disability that does not prevent him from being self-sufficient, and for 10 years he has had his own business where he sells cups or caps for car tires.

Mario Alberto Méndez González lives alone in the company of his adorable dog, and sadly he had to witness his heritage vanish.

This man only cared about saving his dog

While Mario slept in the early morning hours, several residents of the sector managed to alert about the fire that apparently started in the room due to an electrical short. The fire quickly spread to different parts of the house, but fortunately Don Mario woke up and was able to get out of his house in the middle of the fire.

The flames also reached his Nissan pickup, which was full of merchandise and made the fire even stronger.

The neighbors called the fire brigade, but while they waited, Don Mario despaired to save the life of his friend who was still in the house. He wanted to enter to save him, but the neighbors prevented him, since the fire had practically consumed the entire house.

Don Mario, desperate, began to try to put out the fire with a neighbor’s hose, and when the firefighters arrived, they found this moving image.

Mario did not care about material things, all he asked was that they help his best friend.

“He was signaling to the firefighters to let them understand that the only thing that mattered to him was his dog, that they will get him out alive.”

At that time, everyone expected the worst, as it was highly unlikely that the animal had survived, but the man did not lose hope.

As if it were a miracle, one of the firefighters left the house with Don Mario’s dog in his arms. When he saw him, he yelled at him, and the dog ran straight into his arms, he hugged him and couldn’t hold back crying.

The image was captured by photographer and neighbor, Jonathan Bobadilla, who shared the poignant and heartwarming photo online.

Despite all the material losses, the most important thing in the story is that both Don Mario and his dog came out of the incident unscathed.

The images revealed the nobility of Don Mario’s heart and the true love he feels for his unconditional companion. The people who saw the news, as well as his neighbors, in a matter of hours organized different activities to collect funds and help him.

The next morning, Don Mario was at his home helping to collect all the debris left by the devastating fire. Making an effort not to burst into tears, he watched as his entire heritage had disappeared in the blink of an eye.

Despite this, the man does not lose his smile and tries to see the good side of him, in addition, he is grateful that he is still alive and having his friend by his side.

Keila Méndez, Don Mario’s daughter, thanks all the people who have helped her father and the friends who created a GoFundMe campaign for those who want to continue helping.

Now, the important thing is that Don Mario and his best friend can rebuild their house and can have a normal life again.