This man in the UK gets the friendliest greetings from a cute cat with adorable markings on his body. 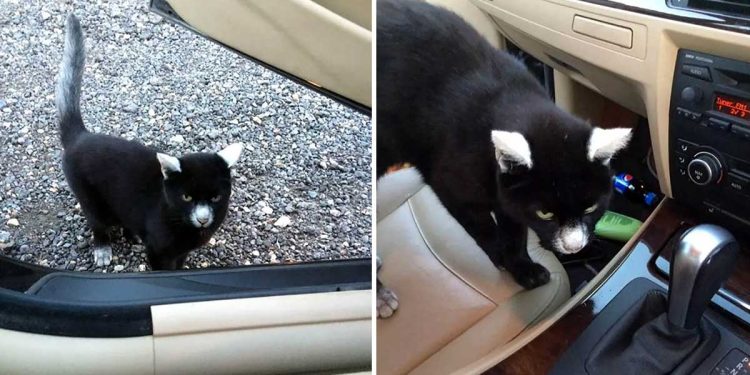 A British man was greeted by a very cute and unique cat when he opened his car door. The kitten has white ears, nose and feet, giving it the appearance of an inverted panda.

The man was delighted to meet such an adorable feline and was quick to snap some photos of their brief encounter. Since then, the pictures have gone viral and people all over the world can’t get enough of seeing this adorable and unique cat with its striking markings.

The friendly cat suffers from a skin disease called vitiligo, which is quite rare in animals. When it occurs, it is most commonly seen in black cats and often causes loss of pigment on the face and paws.

“He lives on a vet farm…He approaches everyone and gets in their cars. He loves people.”

This handsome feline has a very unique and adorable appearance, which has made him very popular in his neighborhood and on social media. Fortunately, he has a loving home with a family veterinarian who takes great care of him.

As cats age, they often develop vitiligo, which causes white patches to appear on their fur. In some cases, the affected areas become large enough that the cat’s fur appears black with a white lace pattern.

So if you ever need a friendly hello or two, keep your eyes peeled for that special reverse panda kitty – this might be just the thing for you!

This Bulldog Loves Looking At The Street Through A Hole, So His Owners Are Painting 2 Suits On The Fence