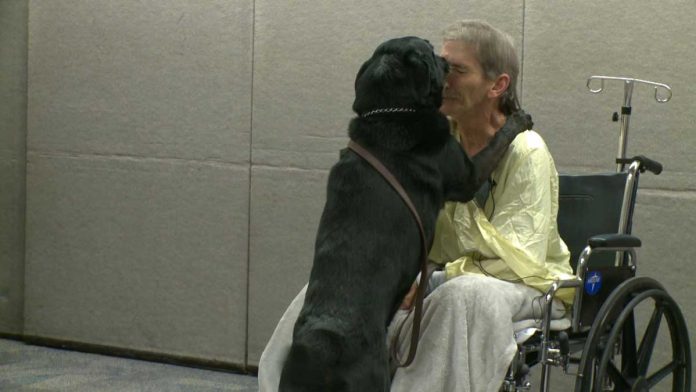 Mitchell lost his wife, his house and his money, but at least he has his dog Hero, for whom he almost froze to death.

Last December, Mitchell lost his wife to cancer after 27 years of marriage. His illness took all of his money and Mitchell spent his last savings on the funeral. A few days later, on January 2, he had to leave his house because he could not pay the rent: at 57, he was left on the streets.

Along with Mitchell, was her dog, Hero, a ten-year-old mixed Labrador retriever and golden retriever, who had lived with the couple since they were eight weeks old. The fate of the two was more than uncertain: they moved to live in Mitchell’s truck with no more heat than it could generate when the engine was started and in the dead of winter in Minnesota, one of the coldest states. the United States.

So they spent many days hugging under a mountain of blankets and cranking the engine every hour for some warmth. Mitchell even considered taking his dog to a shelter so that at least his pet would be safe. But he didn’t want to give up the one thing he had left in life, his one family.

So, he decided to seek help from a nearby church, which earned him a hotel room so they could spend a week together. Mitchell and Hero warmed up, but the man realized something was wrong. Speaking to Kare11 in the Western Journal, the homeless man admits that “he hadn’t felt the heat in days. My feet were cold, but I didn’t feel excruciating pain. They were just numb. “

Mitchell was taken to hospital and from there he was rushed to a burn unit at another hospital with symptoms of frostbite on his feet. However, he thought only of his dog and he left the hospital with a voluntary discharge to take care of him: “I took an oath with my wife over 20 years ago: no one stays on. the road. And that includes Hero. “

Fortunately, Mitchell received a life-saving phone call: A family had promised to take care of Hero on their farm for as long as Mitchell was in the hospital. But that’s not the only thing John and Julia Ganfield did for this man and his pet: they created a page on GoFundMe to raise funds and in just 4 days they achieved the goal they were set: $ 40,000 (approximately 35,000 euros).

She works at the hospital where Mitchell was treated for frostbite and knowing the details of his case, she knew she had to do something for him. Her husband assures us that “they did what they had to do” and now Hero is playing with Bailey, the dog of the Ganfield family who is a mix of Dalmatian and Bulldog.

“It’s amazing. I thought there was no hope. I thought I would recover from these injuries and be homeless again, but it looks like that won’t happen,” Mitchell told through tears. He’s not out of the woods yet, he’s going to lose a few toes from frostbite and maybe even both feet, but he’s managed to regain hope. Now he knows that there are people who care about him and a family that takes care of Hero: his special Guardian Angels.