The volunteer from Dog Rescue Shelter Mladenovac in Serbia didn't sit idly by when he saw the pup living alone, so he took it upon himself to take him to a vet and give him the necessary care, so that he could be adopted by someone who would love him forever. 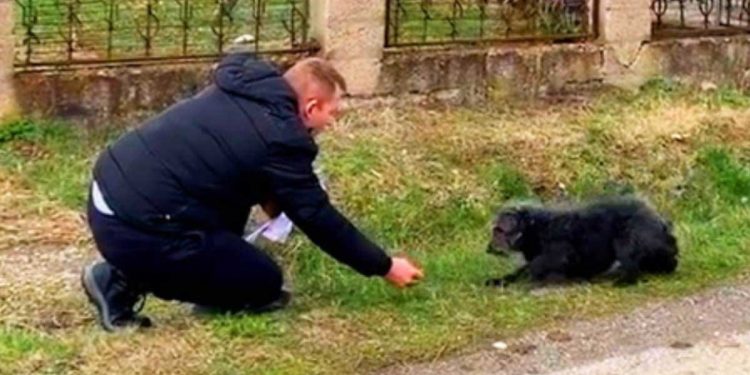 Volunteers in animal rescue groups are used to seeing all kinds of cases every day, but that doesn’t stop them from being surprised by the causes of animal abuse.

From abandonment, physical cruelty and any act that violates the rights of an animal that only wants to receive love and care leaves none of them indifferent, and they know that every day there is has a creature that desperately asks for help without even being able to speak.

Members of the Dog Rescue Shelter Mladenovac in Serbia went to the rescue of a puppy that was wandering the roads in a rural area of the country, still looking for food and a way to survive on its own.

The volunteers knew they couldn’t sit idly by, so they devised the plan to save him. They tried to entice him with food, but the dog was suspicious and afraid to approach, so it was not easy. After several attempts, they managed to lure him into a kennel with treats and keep him safe.

As expected, he was anxious and agitated, but he didn’t know that the intentions of these humans were really good. The pup was taken to a vet for a full checkup, and although he was obviously nervous, he let himself be checked out rather than run away.

The doctor saw that his body was covered in ticks and badly needed a bath, and over time the dog showed signs of confidence by licking his rescuer’s face.

Once they cleaned him up, they served him a plate of food, as he was very hungry and needed some energy back. With her hair shiny and styled, she began to smile little by little, showing confidence and safety towards her rescuers.

Over time he was sent to foster care and his personality blossomed, he was already a playful and affectionate pup who enjoyed licking his tongue and walking around the countryside.

A woman delighted with him decides to adopt him forever and names him Albert, which signifies a new stage in his life.

Now he’s a happy pup who loves running around his yard and sharing with his canine brother, he’s probably never been happier before!

Check out his story below:

It is inevitable to feel happiness seeing Albert’s progress and growth. He finally has the life he always deserved.