Man Sues Supermarket For Refusing Entry To His Service Cat 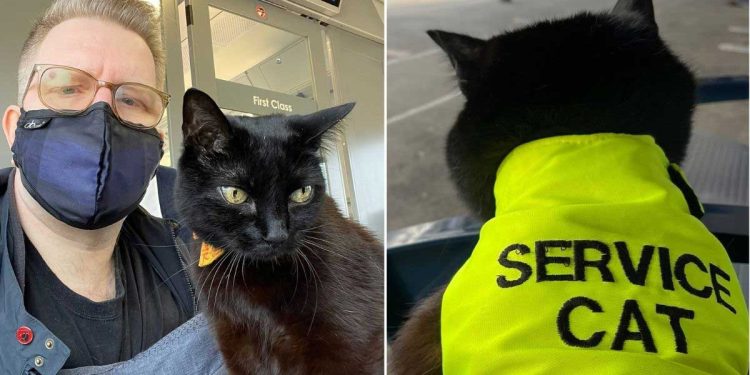 Cats could be treated as guide dogs after an autistic man took legal action against Sainsbury’s.

Ian Fenn, 51, from London, said his inability to shop at Sainsbury’s with his service cat, Chloe, was limiting his ability to lead an independent life.

Fenn, a designer and writer, said her cat helps her stay calm in noisy public spaces and she has been to places like trains, buses, pubs and a hospital.

However, Sainsbury’s argues that cats pose a food hygiene risk, unlike service dogs, which do not.

Fenn was told he had to lock Chloe up when she visited Sainsbury’s in Clapham, south London. He said the experience meant he stayed home for two weeks afterwards.

“She structures my life”

He is now taking the supermarket giant to court for breaching the Equality Act 2010, which says business owners must make reasonable accommodations so that people with disabilities are not seriously disadvantaged.

I have sensory overload in busy environments and tend to shut down, but with Chloe I can focus on her. She structures my life, wakes me up in the morning, tells me when to go to bed. It’s hard to know what she thinks of the relationship, but I feel like we’re a team now.

If Mr Fenn successfully argues that support cats are a reasonable auxiliary aid to customers with disabilities, and that refusing support cats entry is contrary to the Equality Act 2010, it could create a legal precedent.

Chris Fry, a prominent disability rights lawyer who represents Fenn, told the BBC: “Guide dogs are considered to be a reasonable or auxiliary aid to assist customers with disabilities. But there has never been anything specific about anything other than a support dog in this country. We have not found a compromise”

Fry added that he brought the case against Sainsbury’s after going through the “pre-action protocol phase”, which is when the case is exposed and the parties explain their positions.

“Basically we were unable to find a compromise so we had to take proceedings to the county courts,” he said, adding that they “expect a trial takes place within the next 12 months”.

A Sainsbury’s spokesperson said: “We want to be an inclusive retailer where people enjoy working and shopping and understand that some of our colleagues and customers may need support in our stores. At the same time, safety is our top priority and our colleagues are trained to balance maintaining our high standards of food hygiene with supporting all of our customers who purchase from us.

“We are in contact with the local environmental health team to see if there are ways to help Mr. Fenn visit our store without jeopardizing that.”