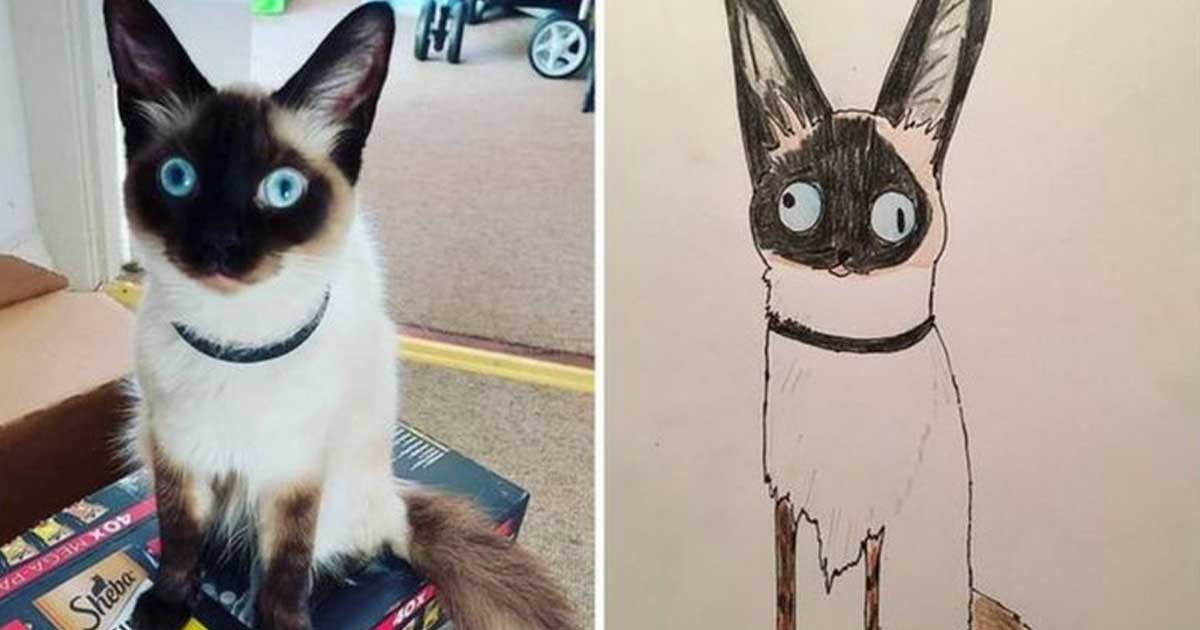 A man has become a popular artist despite not knowing how to draw, as he makes ‘horrible portraits’ to raise funds.

Phil Heckels, a 38-year-old man from a town called Worthing in England, has become popular for raising money for charity by making hideous portraits of pets.

Although he is not a talented artist, his scribble portraits have managed to catch the attention of the people who see them.

The artist goes by the alias Hercule Van Wolfwinkle, and has so far raised nearly $ 18,000 for the charity Turning Tides, who are charged with helping the homeless.

Phil admits he can’t draw, and it all started one day while making thank you cards with his 6-year-old son. At that moment he decided to make a portrait of his dog in the form of a doodle; the result was fun, and he uploaded the drawing to Facebook.

By posting the drawing, he accompanied it with an offer, as a joke, and an alleged cost of the portrait, but genuine requests flooded his Facebook profile.

His closest friends began to say that his drawings were brilliant and asked Phil to also make a portrait of his pets.

Also, unknown people joined the petition, and little by little its publications became more popular and obtained thousands of ‘likes’.

People were willing to pay a price for his portraits, but he insisted on doing it for free, as he considered his drawings horrible.

Phil kept getting solicitations, and that’s when he thought he could do something with the money that people were willing to pay.

The man decided that instead of paying for his gruesome portraits, people would make a donation to the local homeless charity.

Phil was having fun drawing the pictures, and people seemed to really enjoy them laughing, and the best part is that he was helping a worthy cause.

I couldn’t take their money – the pictures suck. So I created a Just Giving page and suggested people donate instead.

He created the Facebook page Pet Portraits By Hercule and set up the JustGiving website, helping to raise funds in this way.

Within days, the demand for his doodles had grown dramatically and he had already raised more than $ 5,000 for Turning Tides.

We at Turning Tides are absolutely thrilled with the incredible talent, energy and enthusiasm that Phil (aka Hercule Van Wolfwinkle) put into his Pet Portraits. Phil and all of his fervent supporters have not only raised a staggering sum of over £10,000 in just one month, to support our charity; it also increased awareness of the growing number of homeless men and women in our community.

Although Hercule Van Wolfwinkle is a name that has become very famous for his drawings and actions, he only does it to help others.

For him, the most important thing is that the organization can help all the people in need through donations from its clients.

Phil is exceptionally modest, but he really made so many people smile at such a difficult time. Plus, knowing that donating her beloved pet portraits will also have a lasting positive impact on the most vulnerable people in our community is truly very special.

More than 11 thousand people follow his Facebook page, and thanks to this he has been able to raise more than 18 thousand dollars for the organization.

The man produces about 150 drawings a week and has a backlog of approximately 600 requests to make and submit.

For Phil, creating the cartoons is fun, but the volume of applications has started to be overwhelming and he joins his job full time. So, making a donation does not guarantee having a fun portrait of the artist, since she cannot meet everyone’s demand.

However, man will continue to do his best to be able to serve the greatest number of people who help with his noble cause.

I cannot believe this. It’s a bit of fun for everyone, including me. When it gets too stressful, I have to stop. But I’ll try to make as much money as I can for Turning Tides.

Even knowing these limitations, people continue to support the charity and hope that Phil will draw his picture.

Hercule Van Wolfwinkle is sure to become a professional artist because of his fame, but for now he will continue to raise funds for the organization.

If you want to donate and be part of the waiting list for an artist drawing, you can do so on the JustGiving website.