Mostaccioli, The Cat That Impacts For Its Resemblance To Freddie Mercury 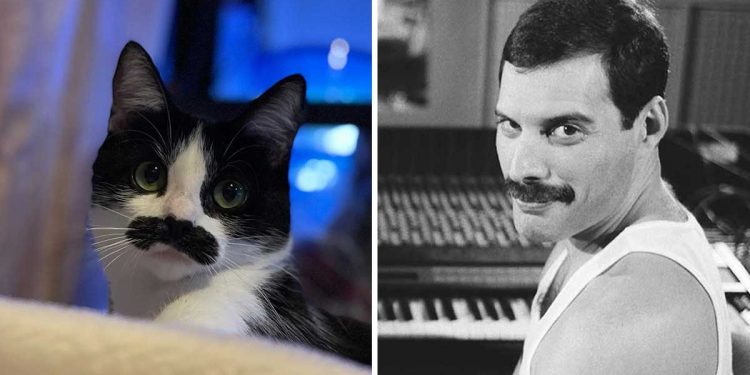 He is causing a stir on Instagram for his mustache, which makes comparison to who the frontman of Queen was inevitable.

Dogs and cats, mostly, but also other exotic animals. Weakness caused by pets knows no bounds. This is the case of this little kitten that has gone viral on the networks for its surprising resemblance to the music icon Freddie Mercury.

Her name is Mostaccioli and she wins the hearts of thousands of people on Instagram, through her account @izanami.and.mostaccioli thanks to her unique coat pattern, which left her with a lock of black hair just above her upper lip , giving him an impressive mustache as distinguished by the British musician.

The stray kitten was found by his owner Natalie, from California, United States, with his three siblings when he was just a day old on August 30, 2020, according to the Mirror account.

This cat’s mustache would make any man jealous

His mother was a Bombay wildcat who was severely underweight. Natalie found the cat and her kittens in her mother’s garden, took them to the kennel where she works and cared for them.

While trying to find a home for the kittens, Natalie couldn’t bear to part with little Mostaccioli, she became so attached to him that she decided to adopt him into her own family.

However, the adorable feline is not alone, as she now has a sister-in-law named Izanami and the pair are causing an Instagram sensation.

As for Mostaccioli’s shiny mustache, it wasn’t very noticeable at first, but has since taken on a very impressive shape, and social media users love it.

Responding to a comment on an Instagram post where the kitty seemed particularly nonchalant, Natalie said, “Haha she just has an elongated cat face, she’s super sweet.”

Some commentators called Mostaccioli’s features “cuteness overload”, while others couldn’t help but point out the cat’s resemblance to the leader of British band Queen.