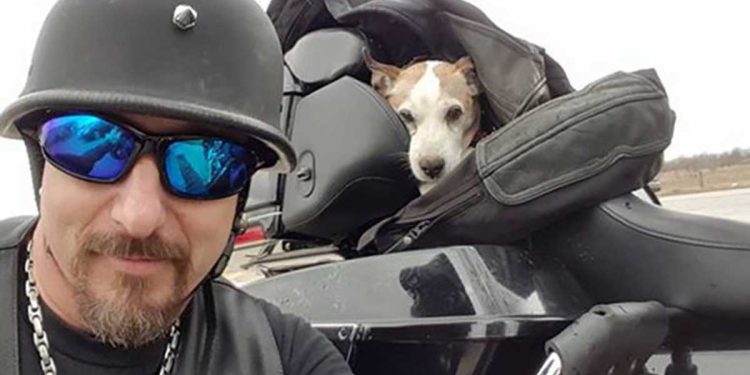 A motorcyclist saves an abused and abandoned dog on the road, he decides to stop and the dog’s life changes forever.

One day while driving, Brandon Turnbow, motorcyclist and musician, saw something he couldn’t believe. He was on his motorbike when he saw a man on the side of the road hitting a dog, and decided to stop, that’s when the dog’s life would change forever.

It was just another normal motorcycle day, when Brandon was looking for a place to find his father. He noticed that a vehicle had left the road. He thought the person needed help, so he stopped behind him.

But the motorcyclist was shocked to find that the man inside the truck was hitting someone. Suddenly, the man threw what appeared to be a white puppy out of the car and drove off immediately.

Biker saves dog left on the side of the road

It was then that Brandon stopped to check on the dog. He knew that if he left the poor animal alone, he would be in trouble and possibly die. So, he named the little dog Mr. Davidson and put him on his motorcycle.

They spent the day on the road before heading home, and when Brandon reunited with his dad, he was surprised to see his son had found a furry friend along the way.

Eventually, they returned home together, and he continually made sure Mr. Davidson was okay along the way. After a long 45-mile drive home, Mr. Davidson has arrived at his new home, as Brandon has decided to keep it forever.

Well, it seems my co-pilot has found peace. His stomach is full and he found the pillow.

Thanks to Brandon, Mr. Davidson is now happy and has a home, without this man, the little dog thrown to the side of the road might have met a sad end.