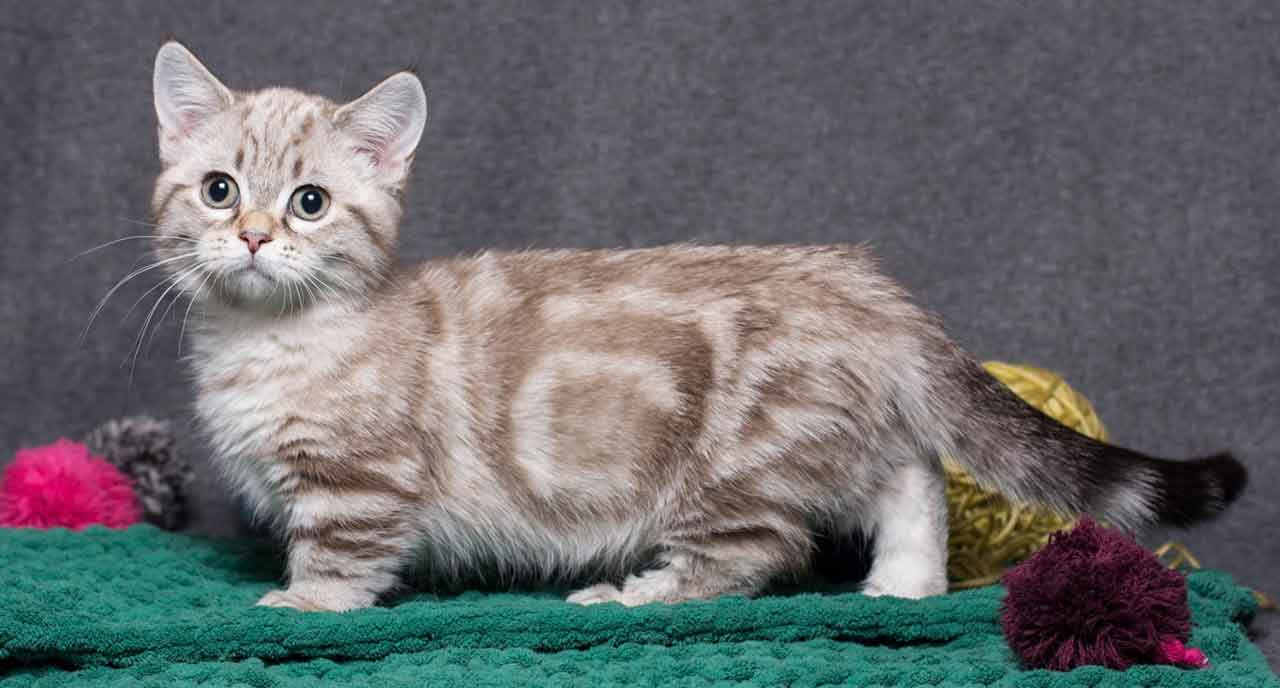 From small to medium size, the Munchkin cat has become one of the most popular breeds due to its special physical appearance. This feline is also known as a short-legged cat. However, it is not the only attribute that defines it, as this adorable kitten also stands out for being very affectionate, social and active.

Lovely, calm and curious animals, always ready to play and accompany the owner on travels and trips – these are Munchkin cats.

Short feet, like those of rabbit and miniature Dachshunds, absolutely do not prevent Munchkin cats from running or jumping, they have excellent health and an excellent, docile disposition.

When a genetic mutation occurs naturally in a breed, and is improved and developed over the years, it is fairly easy for a new breed to emerge from it and be recognized as such. This is the case with the munchkin cat, an animal which at first glance may appear to be manipulated by human hands. But the truth is that these cats appeared casually and naturally, and even at first they went unnoticed.

Do you want to know more about the Munchkin cat breed? Read and find out in ‘ Pets Feed ‘ everything you need to know about the munchkin.

Characteristics of the Munchkin cat

Without the most distinctive characteristic of the breed, the short length of its legs, the physical characteristics of munchkin cats would be very similar to those of most feline breeds. In fact, one of its qualities is that it presents a multitude of variations in terms of facial features, type of coat and tone, since none of these requirements was essential for a specimen to be considered of the Munchkin breed.

Therefore, the only concern of breeders was the length of the legs. It is therefore difficult to define the physical characteristics of the munchkin cat breed. It is not uncommon to find specimens of this breed with characteristics similar to the Persian cat or the Siamese cat, and with a coat that does not respond to any of them. In general, the coat of this breed is generally soft, dense and fluffy and can come in different lengths, from short to long.

As for coloring, there is no type of restriction, and within the breed, all colors and patterns are accepted. Its legs deserve a special mention, naturally modified by genetics, and unique among all feline breeds. And these are short or very short legs, especially the front legs, which give it a very specific appearance even if they have no negative effect on your health.

Due to the difference in length between the front and rear legs, it is common to find specimens of dwarf cats known as munchkin supported as kangaroos, only on the hind legs and with the front legs collected. Otherwise, the dimensions of the munchkin cat breed are normal and average for the other breeds, perhaps much smaller.

The most common is to find copies of weights between 3 and 5 pounds, weights similar to those of many other breeds.

Behavior of the Munchkin cat

Having such short limbs does not make the Munchkin cat a slow or clumsy cat, quite the contrary! Precisely this characteristic trait made it an agile, fast, dynamic and light cat. The munchkin is capable of reaching high speeds and heights, as well as entering any space or hole, however small it may appear.

On the other hand, this breed of cat is distinguished by its great intelligence and energy, being one of the most active, playful and affectionate cats. In addition, the munchkin is friendly, outgoing and docile. He’s also quite curious, so he’s always looking for a way to see what’s going on around him to control the environment and get to know every corner of the house.

He enjoys exploring and learning new things every day, so providing new stimuli, toys and challenges is a must for his tutors. His curiosity and his desire to play remain well in adulthood. The munchkin is sociable and likes company. We can teach him to bring things and to obey orders.

Although they can go to the counter and search, many prefer to use their intelligence to find an easier way to get up. They can also run fast, despite the size of their legs.

Due to the shortening of long bones and the normal length of the spines, as well as the desire of breeders to breed kittens with an interesting color or appearance, Munchkin cats may suffer from the following diseases:

This breed is easy to maintain, does not require special care. Experts recommend following a few simple rules.

Despite the companionable nature of cats, they love to “build nests” in order to feel protected during rest. Set up a basket, small sturdy box, or other cottage with soft bedding for the munchkin.

Purchase a deep litter box as clean pets actively bury waste and can litter around.

It is enough to comb short-haired munchkins once a week, long-haired – 2 times. The main thing is to prevent the occurrence of tangles.

It is enough to bathe these cats once every 3-4 months with special shampoos.

Changing claws is usually easy for munchkins, especially if the house has a scratching post. Once every 2-3 weeks, it is worth checking the condition of the paws in order to help the pet if necessary.

You should not clean your cat’s ears deeply and very carefully, about once a month. It is undesirable to let cats go for an independent walk, as a squat animal often looks like preparing for an attack, which can be

Munchkin cats feel great when they are kept in apartments, and they do not need to walk, but if the pet lives in a private house, then it will be a great pleasure for him to walk on the grass.

Fresh air and a lot of interesting things await the cat in the yard or in the garden, walks are very useful, but the owners must protect the pet from accidental entry of strangers into its territory.

Munchkin cats can easily cope with yard cats on their own.

Munchkin kittens eat very often, so it is advisable to feed them at least six times a day with high-calorie wet food.

For this, super-premium wet food from well-known manufacturers is suitable.

As an option, the kitten is offered dry food, which is constantly in his bowl.

Adult Munchkin cats eat quite a bit, they are unpretentious in food, so you can feed them both natural food four times a day, and ready-made dry food.

Food should contain enough protein, the proportion of which is eighty percent of the total diet.

Raw beef or lamb, chicken eggs, cottage cheese and milk should be offered to your cat every day. It is undesirable to give raw fish.

Conclusions about the breed of cats Munchkin

The original and funny breed of cats, the munchkin, is becoming more popular all over the world for many reasons:

There was no special work on breeding Munchkin cats, and the livestock originated from one producer, born by a cat with short legs picked up on the street.

In the genotype of all Munchkin cats, the dominant gene for achondroplasia is present, which disrupts the normal growth of the long bones of the limbs.

That is why the carrier of this gene gave numerous offspring with short legs.

The breed was recognized in 1991, and the final and revised standard was found only in 2007.

Considered the feline equivalent to the dachshund, this cat breed has caused controversy in the world of cats. The munchkin mutation was discovered in America in 1983, where this cat was baptized with the name of the “little people” of The Wizard of Oz.

Short-legged cats, such as Munchkin cats, were reported in England in the 1930s and in Russia in the 1950s, but these cat breeds were not perpetuated. In the United Kingdom, this breed is not recognized by the main British association of cat friends.