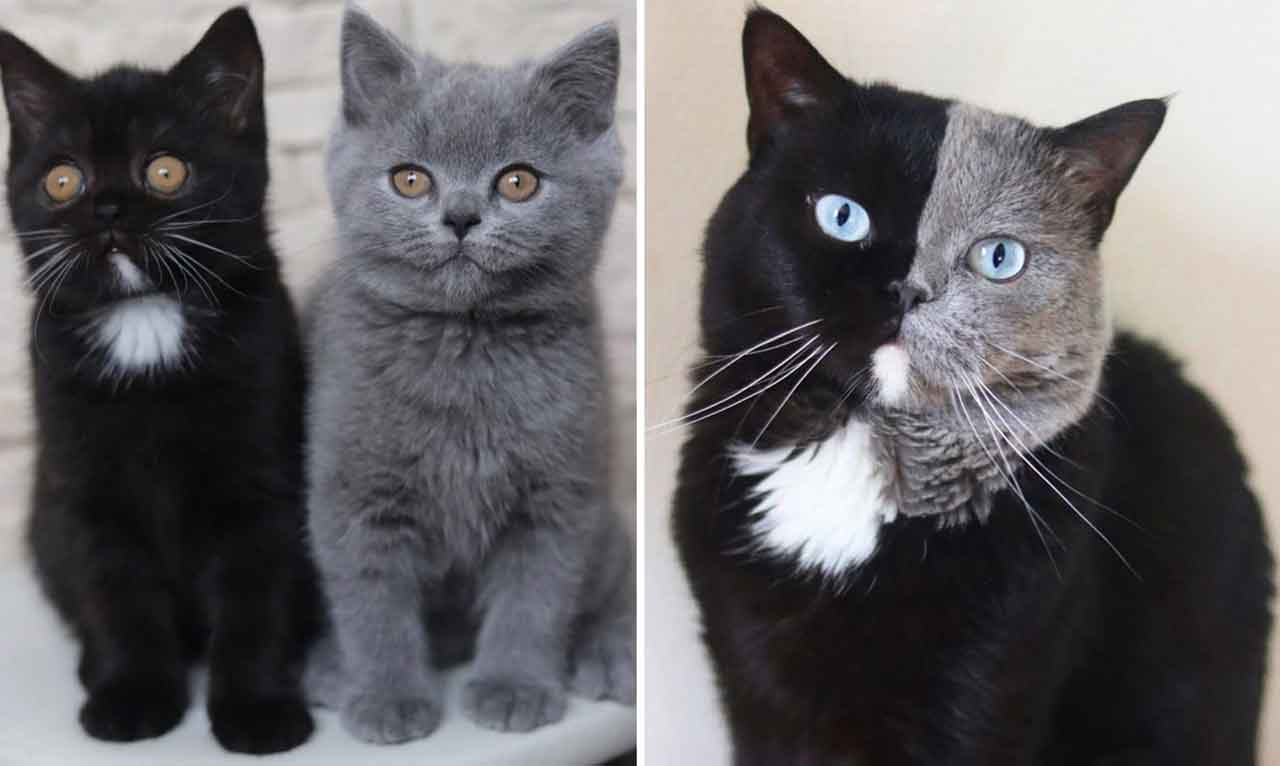 A handsome cat famous for his two-tone face, became the father of two cute kittens who oddly shared his face colors.

A handsome cat with a remarkable two-tone face, he is the father of two beautiful kittens. But what is surprising is that each took the color on each side of their face. Narnia is three years old, has a rare genetic trait that sets him apart from others, his face is split in half by two colors.

Narnia is a French cat born in Paris, but lives in Great Britain with her mother, Stephanie Jiminez. Since her arrival, she has stolen everyone’s hearts with her beauty.

His face is quite strange, he has a gray side and a black side, he also has beautiful blue eyes, a rather unusual coloring.

When Narnia was born, I was very surprised. I immediately knew that it was exceptional. Narnia was born with a black and gray double face, which is very rare.

Generally, this type of trait is due to a genetic abnormality called chimerism, a natural condition in which an individual has two different types of cells, each with a different genetic makeup. In male cats, this means they had an extra X chromosome during their embryonic stage of development.

But, the case of Narnia is particular, this rare anomaly does not apply, because when carrying out certain genetic tests, they revealed that it was not chimerism.

A geneticist carried out tests and discovered that Narnia had only one DNA…it remains a mystery to science.

He also has beautiful blue eyes, which is very rare for a completely black cat. Normally, blue eyes are often found in white cats.

But the important thing here is that Narnia became the father of two beautiful kittens, one gray and one black, like the colors of his face.

The kittens, gray-haired Phoenix and black-haired Prada, were born last year and caught people’s attention. Not only for her beauty, but for having inherited all the colors of her father’s face.

The owner of Narnia claims that the furry handsome handles the role of father very well and is very happy with his two creations.

Narnia is doing very well and loves playing with her kittens.

However, this isn’t Narnia’s first time as a father, he’s been a father many times before, and all of his children have different color variations.

In addition to being a father, this cat leads a life full of attentions and adventures.

Her kittens have grown up healthy, Phoenix has found a forever home after being adopted by a family, and Prada will soon be moving into her new home as well.

For now, people will continue to enjoy Narnia’s strange and beautiful appearance and cute kittens.