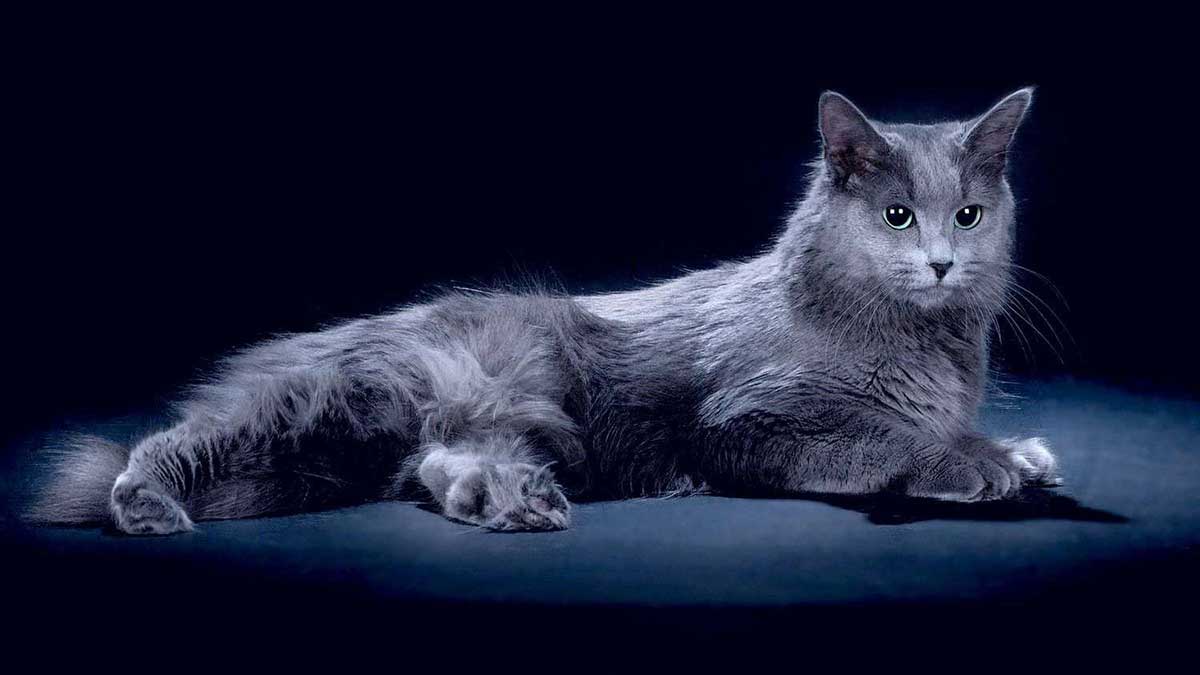 With a beautiful and graceful pearl gray, with a long and silky coat, this is how the cats of the Nebelung breed, characteristics inherited from Russian blue cats, as far as color is concerned, and cats with long hair, in terms of softness and long hairs.

The breed received an exotic name for the external similarity of long-haired smoky cats with fog, blowing mysticism and magic. The coat really has an amazing soft flowing structure and an extraordinary bluish-silver tint. In the sunlight, the animal looks like a mystical cloud from the Nebelungen myth.

Not only is that its image is adorable, but also the Nebelung has an affable and especially cheerful character, which made that many are in love with these wonderful kittens.

In this ‘ Pets Feed ‘ breed sheet, we bring you closer to one of the breeds of cats that are gaining popularity in Europe and America, to explain all its characteristics, care and possible health problems. Read on to know all the information about nebelung chat.

The nebelung cat is considered to be a medium-sized breed, with a weight of between 4 and 6 kilograms for males and between 3 and 4 kilograms for females.

As for the most remarkable characteristics of the nebelung cat, these cats have a body with a strong complexion, but very proportioned and balanced, with flexible and very agile members. The tail is long and has a long gray coat. The head of a nebelung is triangular, medium and with a long and straight muzzle. The ears are large, fairly separate and always straight. This cat has penetrating blue or dark green, almond-shaped or round eyes of medium size.

The striking fur of these cats is always long and gray, the same color as that of a Russian blue cat. These hairs are soft and silky to the touch, being longer in the tail and very thick all over the body.

This cat is very cheerful and affectionate, although he is quite reserved when he does not know people. For this reason, it is essential to socialize a nebelung cat to strangers as quickly as possible, to ensure that it does not present an excessive fear to visitors.

In this sense, if we adopt a nebelung kitten, we must know that its phase of socialization must begin as soon as possible, because after three months of life, it may be expensive. However, that does not mean that if we adopt an adult cat, we can not socialize it because that is possible, but we need to have more patience.

Continuing with the temperament and behavior of nebelung cats, it should be noted that they are very active and playful so we can have fun preparing games and playing together. However, it may not be the best idea to pretend to be the perfect cat to spend time with children, especially with the little ones, because it is not too patient, but rather capricious, so children can be frustrated trying to play with them.

These cats are considered to adapt quite well to coexistence with other cats and other domestic animals.

In addition, nebelung cats need the company all the time, so if we spend a lot of time away from home, it is easy for them to suffer from disorders such as anxiety and depression.

Because of the characteristics of its dense and long coat, we will have to pay attention to its care by brushing it quite frequently. More specifically, it is recommended to brush this cat at least once a day so that it is in optimal conditions, although if this is not possible, this will be enough 4 to 5 times a week.

These cats need to do a lot of activity, in order to guarantee him the best care, we can use games, but also walks, because many are those who like to take their nebelung for a walk, using a suitable harness to cats. If we decide to do it, it is better to choose the route of the walk, avoiding traffic areas or with loud or screeching noises, which can scare and even scare away our pet, possibly lose or suffer an accident.

The nebelung breed is particularly neat, so you will have to keep its sandbox, as well as its bowl of water and food, always very clean and renew them frequently. If they feel they are not clean enough, they can stop eating and even not use the litter box.

Representatives of the feline family, such as the Nebelung cats, become adults, and capable of reproducing, already at the age of 7 to 9 months.

Most common cats have offspring for the first time at 10–12 months of age.

Nebelung females intended for breeding should be admitted to a partner no earlier than 1-1.6 years old.

Covering them is permissible only after complete weaning of kittens, therefore, usually the first estrus after childbirth is missed.

As a rule, adult males are in a state of constant readiness for mating.

Females are ready to mate only during estrus.

The peak of sexual activity of Nebelung cats falls on the warm season, when daylight hours increase, and favorable conditions for the birth of kittens come.

Note! Early mating can lead to unhealthy offspring. It is also dangerous to mate cats that have not yet recovered from previous births.

Nebelung females during these periods become more affectionate, they begin to meow loudly, bend their backs, lifting the back of the body and tail up, rub their head and neck against furniture or the legs of household members.

Nebelung are extremely healthy cats. Some specimens may even live up to 20 years or more. That’s why, if we keep our cat in good condition, that is to say we give him a good diet, do daily physical exercises, have affection and companionship and visit regularly the veterinarian, we can enjoy a pet for many, many years without health complications.

In order for our feline to maintain good health, we must ensure that our vaccines are up to date and that we perform internal and external deworming. It is also strongly recommended to check and keep its eyes, ears and mouth to avoid any risk of infections or discomfort of various types.

The average life expectancy of nebelung is around 15 to 18 years.

According to the rules of vaccination, 10 days before, deworming should be carried out by giving the kitten anthelmintic drugs.

2 weeks before vaccination and 2 weeks after vaccination, it is better not to change the diet.

All domestic cats must be vaccinated against rabies: the first vaccination is carried out at the age of three months.

The kitten is vaccinated against leukemia at the age of 8 weeks, as well as FIE, FVR and FCV vaccines.

The vaccination should be performed by a specialist veterinarian.

Information about the vaccination carried out is recorded in the veterinary document.

First of all, it should be understood that the menu of an adult cat should be balanced and not plentiful.

Not all foods from the human diet are suitable for feeding a pet. Eating sweets, canned food, smoked meats, fatty and fried foods by cats can lead to serious consequences, such as: digestive disorders, stomach, liver and kidney diseases.

Tastes and preferences of cats for certain types of food are formed from an early age, and if the kitten is used to getting goodies from your table, then later it will be difficult to wean him from this.

From the first days of complementary feeding, a variety of foods must be included in the Nebelung cat’s diet. This is not only meat and fish, but also vegetables, cereals, dairy products. A cat’s diet is significantly different from feeding an adult cat.

You can also add ready-made feeds to the animal’s diet. Teaching a Nebelung cat to eat healthy from an early age forms its correct feeding behavior.

Nebelung cats are very expensive. Since the representatives of the breed are quite rare, and the official nurseries where the Nebelungs are bred, the more so, the cost of these animals reaches 1000$ and more. Culls are offered to buyers at a more affordable price.

To expand the gene pool, the Nebelung cats can be crossed with their closest relatives, the Russian blue cats. As a result of this mating, short-haired kittens appear – carriers of the gene for a long hair coat. Sometimes babies are left for further selection, but more often they are put up for sale. And even if their price is significantly reduced, and the appearance does not meet the standard: you will acquire a devoted and loving friend who will make your life brighter and richer!

The Nebelung cat is one of the most active breeds known. You will see him happy to play and explore, so if you do not pay attention to him or if you leave him alone for a long time, he can only adapt to living very well in an apartment. Be careful because cat nebelung learns to open doors. In addition, he likes to drink water from taps and sinks.

Affectionate and intelligent, he can also tend to be finicky and demanding. And he’ll let you know with loud noises when he wants something. For this reason, it is not recommended to live with very young children. Either way, the nebelung cat is a sociable animal that gets along well with people and with other pets.

Most likely, he will particularly love a family member, who will follow around the house to demand care and attention. And although he manages to adapt well to new people and situations, a nebelung cat initially tends to show a certain reserve for strangers.

The cats considered as the first of the Nebelung breed were born in 1986, a few years ago, in the United States. These kittens were the children of a long-haired American cat and a Russian blue cat. These cats belonged to an American breeder named Cora Cobb, considered “godfather” of the breed. The name of the breed comes from the German word “nebel” which means “fog”, all thanks to the gray color of its fur.

Although these cats have gained a lot of love from the general public, there have been some issues regarding the recognition of the breed by official bodies. Currently, thanks to the struggles of several groups of breeders, the breed is already recognized by various entities such as the American Cat Fanciers Association (ACFA), the World Cat Federation (WCF) and the Official Book of Feline Origins (LOOF).