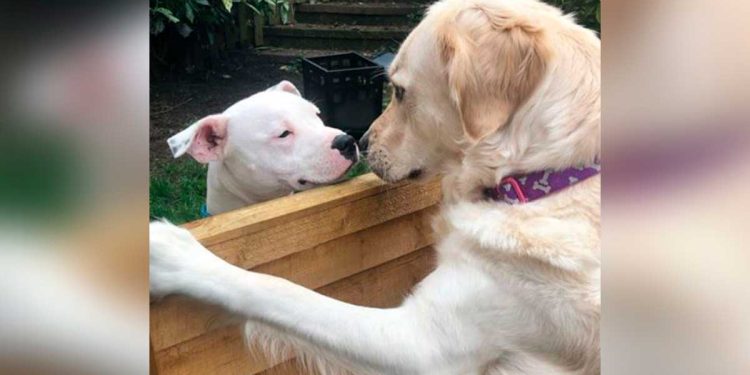 This pup feels an incredible connection with his neighbor and now they’ve managed to stay together. They are inseparable.

Lola is a beautiful golden retriever who has shown an incredible bond with her neighbor Loki, a Staffordshire terrier. She and her mother Amber Monte moved into their new home outside Surrey, England in March, and Loki was one of the first to welcome them.

We never lived next to other dogs, and Lola was so excited to see another dog so often! When Loki was in his garden, he would always jump over the fence and look for Lola, since he knew she was usually there.

Lola responded to Loki’s greetings and her parents thought it would only be a passing thing while they met.

A golden retriever falls in love with the dog next door

Amber had never thought that Lola could feel a real attachment to Loki, but after a while her perception changed.

She’s usually quite shy. She’s pretty scared of other big dogs when we go out for walks, which is why we thought it was so weird when she got along so well with Loki.

Amber began to notice a change in Lola’s demeanor as she preferred to spend her days at the back door moaning to get out, as if she couldn’t wait to see her neighbor friend.

When we let her out, the first thing she does is jump over the fence to see if Loki is out. If Loki isn’t out, she sits and waits by the fence.

Loki for his part, discovered a way to be even closer to Lola.

Fortunately, the parents of the two puppies understood the strong bond that united them and let everything flow. Whenever they’re together there’s a lot of jumping, running and kissing.

They are inseparable when they are together.