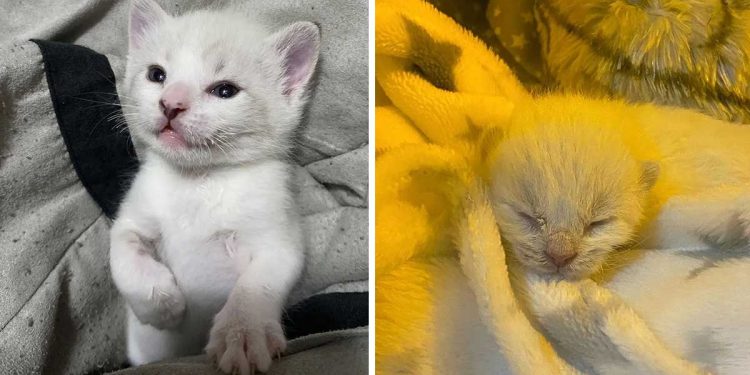 After a rough start to life, a warrior kitten overcomes all odds and now has a forever home.

An animal shelter in Arizona, USA received a litter of newborn kittens at their facility who needed urgent help. A kind-hearted person had found them abandoned in his garden, so he didn’t hesitate to take them to Sun Cities 4 Paws Rescue.

With no feline mother near the kittens, the woman who rescued them knew they needed specialist care to survive and asked for help.

A panicked lady came through the door asking for help. I ran to the parking lot and she had three little babies bundled up. They were seriously injured (probably bites from another animal).

Rescued kitten turns out to be a warrior

At the time the shelter was closed, but Kara and another colleague sprang into action and helped the little kittens, who were completely covered in fleas and very dirty, so they were cleaned up and medically treated for all their injuries.

They were then placed in a small incubator to keep them warm, and Kara decided to take them home for round-the-clock care.

Despite her best efforts and dedication to help the kittens, two of them did not survive due to their health issues.

Only one survivor remained, the adorable kitten named Mendel, who perked up all night and showed his will to live. Despite being the size of the palm of a hand, the little creature made it clear from the start that nothing could stop it.

When her eyes started to open, her meows also intensified, especially at feeding time, as if to say: Where’s the bottle?

In order for him to sleep comfortably and accompanied in the incubator, Mendel received a fake mom, a stuffed cat toy with a heartbeat. However, Mendel loves spending time with his adoptive mother and even more when she’s finished eating, so she gives her lots of hugs.

Soon Mendel was old enough to move into his own paddock, and he began chasing his keepers around the house demanding attention. Over time, Mendel’s personality began to emerge and he began to show that he was ready to grow and prosper in the best way.

Although the kitten took a long time to get up and walk, due to injuries, Mendel didn’t let anything stop her.

He persisted until he perfected his walking, then he started running and climbing like a normal cat would. The warrior kitten finally overcame all his problems and day after day he continued to thrive in his wonderful foster home.

He was growing into a big cat and you would never have imagined he started out in such bad shape.

Mendel turned out to be a champion, and as such he turned into a young, energetic, happy, healthy, loud, and very mischievous cat.

After graduating from foster care, Mendel returned to the shelter with the kittens available for adoption. Luckily, a wonderful couple fell in love with him and went through all the paperwork to adopt Mendel forever.

Mendel is now happy in his new home and although his start in life was difficult, he has grown into the cutest and most affectionate indoor cat.