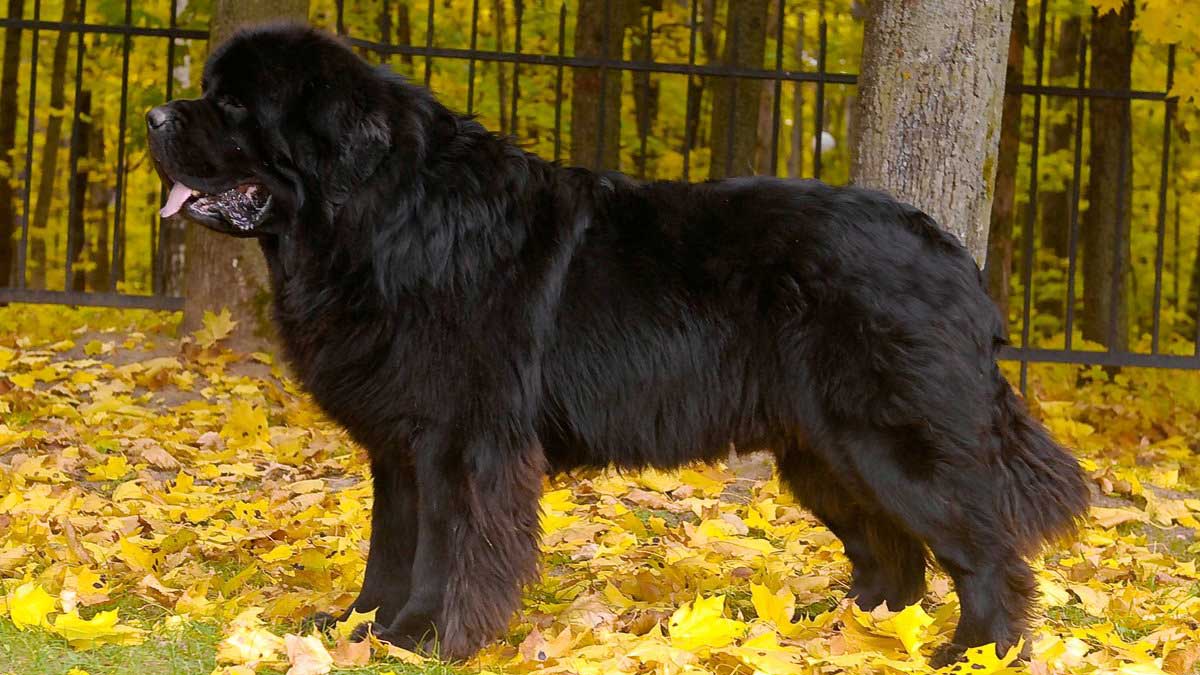 Also known as the Newfoundland Retriever, the Newfoundland is one of the giant dog breeds that exists. Its origin has a lot to do precisely with the Canadian island of Newfoundland, although we know that it was not there, but was introduced by European settlers in the form of their ancestors.

It seems to have a common past with the St. Bernard, with the Spaniel and probably with other mastiffs because of its characteristics, even if all this is more of a hypothesis than a real knowledge.

There are many myths surrounding the breed, and in ‘ Pets Feed ‘ we will explain what is its true history and many other details that you should know if you are considering adopting this wonderful guard dog, such as its character, physical characteristics or their care needs.

When he is a puppy, he looks like teddy bears, but this stage does not last long, because he grows very quickly. It can be black, brown or black and white (called Landseer).

Find out in ‘ Pets Feed ‘ everything about the Newfoundland dog:

There is no exact information about the origin of the breed, there are only a few reliable facts. We know that Newfoundland is a very old type of dog. The homeland of divers is Canada, namely the island of Newfoundland. It is believed that the North American Indians were their first owners on the coast of this island two thousand years ago.

The Molossians are called the ancestors of modern Newfoundland dogs. The purpose of the breed was primarily to transport goods. They also performed a security guard service. The Newfoundland’s ability to swim and dive beautifully is given to dogs from birth. This quality has made them outstanding rescuers.

We will take a step-by-step look at the development and growing popularity of the breed:

Newfoundland is a large, muscular breed. Bitches can be called more graceful than males. Their body is less massive and more stretched. The growth of adults is 66-71 cm, weight is 54-68 kg. In all the external appearance of the diver, one can feel his kind disposition and majesty.

A large head rests on a powerful, rather long neck. Hanging ears look small relative to the head. The shape is triangular, the ends are slightly rounded. Small brown eyes. The muzzle is short, square in shape, without folds. Large nose, black or brown (depending on coat color). The jaws are powerful. Straight or scissor bite.

The body is massive. The croup and chest are wide. The belly is not tucked up, almost straight. The tail is pulled down, slightly curved at the end. When moving, the dog raises it to the top, but does not throw it on its back. The tail helps when the dog is swimming, acting as a rudder. Legs are straight, parallel. The hind legs are more muscular and powerful, which allows you to quickly swim, run, and pull heavy loads. The paws are strong. The lucrative fingers are removed.

The undercoat can be brown or gray. The color of the coat is allowed as follows:

Also in the characteristics of the breed, it should be noted that this dog eats and drinks a lot, loses a lot of hair and tends to drool, so it is not always recommended to stay inside the house.

Personality and character of the Newfoundland dog

Newfoundland dogs are docile, calm and therefore become fantastic animals for the family, because they get along very well with humans and other animals.

They have a natural protective instinct which can become a nuisance when they continually try to get their owner out of the water as an example.

These sociable dogs live their lives fully and are known to be one of the friendliest breeds.

Despite its imposing size, the Newfoundland is a particularly affectionate and gentle dog, very sociable and calm. He is not excessively playful, although he likes water, being able to spend hours there. In addition to being sociable with adults, Newfoundland tends to tolerate treatment with other animals and is very patient with children, who love and treat with great delicacy.

The FCI describes Newfoundland as a dog that reflects kindness and gentleness, a cheerful and creative dog, serene and sweet.

With proper care and nutrition, a Newfoundland dog can live up to 10 years. The health of these large dogs is largely in the hands of the owner. It is the owner of the pet who must vaccinate on time, show it to the veterinarian for prophylaxis, do an x-ray, since large dogs are prone to dysplasia. Also, the owner of the Newfoundland should know what diseases and health problems this dog is prone to:

The Newfoundland dog must have at least 60 minutes of exercise per day and it needs a lot of space to move around. Ideally, a Newfoundlander should be allowed to walk in a back garden as often as possible so that he can really let off steam in a safe environment. That said, the fence in a garden must be very secure to keep such a large dog.

Due to its thick and oily double layer, the Newfoundland suffers when the weather is warmer and therefore care must be taken when exercising. It is best to walk a dog earlier in the morning, then later in the afternoon when the sun is lower in the sky and the temperature is colder. Care should also be taken when walking a Newfoundland dog anywhere near water, as this dog likes to swim and can just jump, regardless of the weather or the safety of his swim.

You should monitor the exercise of Newfoundland puppies during their growth to ensure that there is no damage to the bones and joints.

A large Newfoundland dog is not very comfortable living in small spaces. Therefore, it is better to keep such a pet in a spacious aviary equipped with a large warm booth. If you have a large apartment or a private house, a diver can be kept in a room, provided that certain rules are followed:

Regardless of where your dog is kept, it needs hygienic care. The rules are simple, but necessary:

Feed the Newfoundland dog very carefully so as not to harm its health. The fact is that the representatives of the breed are passive and at the same time love to eat well. As a result of an improperly formulated diet, a diver can suffer from obesity. To avoid this, it is necessary to determine the correct portions, the older the puppy, the less high-calorie food should be, and also provide the pet with daily leisurely, long runs and brisk walks.

If you notice that your Newfoundland puppy is gaining extra weight, you can reduce the portion a little.

A grown Newfoundland dog (from 10 weeks to 3 months) is fed at least 3 times a day (breakfast, lunch, dinner) – one and a half (345 g) cups of dry food for puppies with the addition of 45 g of distilled warm water.

Once a Newfoundland puppy is 18 months old, it can be fed with food for adult dogs.

An adult Newfoundland dog is fed 2 times a day, the daily rate is up to 1 kg of dry food, but the portion may vary depending on the activity and weight of the dog.

There are widely available feeds on sale, compiled specifically for the Newfoundland, but when choosing a natural diet, consider the following:

Fun Facts About the Newfoundland Dog

If you are thinking of sharing your life with a Newfoundland dog, consider all of its needs before deciding, because it is only by filling them that you will enjoy a happy and balanced pet, with which you can enjoy the best relationship.