At 80, He Leaves His Comfortable Life And Creates A Shelter To Help Stray Dogs 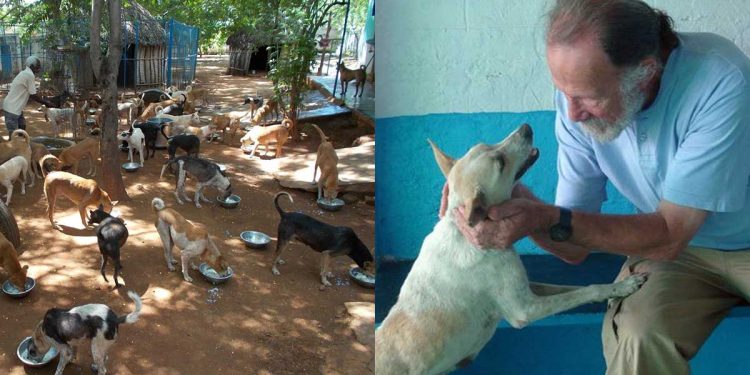 This old man was 70 years old when he decided to leave his comfortable life in the United States and move to India to create a sanctuary and help stray dogs.

Leslie Robinson is now 80 years old and since arriving in Tamil Nadu, India, he has managed to put together a wonderful team of veterinarians and animal lovers who are as passionate about helping animals as he is.

My plan was to stay here for about 10 days. So, I wanted to rent a cabin somewhere near the Himalayas and spend a few days there.

This man gave up his peaceful retirement to open a sanctuary

But life took a turn when Leslie Robinson was about to leave and learned that authorities in Tiruvannamalai were going to kill stray dogs to control the town’s population.

It had been going on for 40 years. I had heard terrible stories of executions. I must have made about 100 or 150 calls between Friday and Monday, I finally managed to stop the culling provided someone put in place a population control program to monitor this situation. There was no one to do it. It was clear that if I left, it was only a matter of time before the massacre took place. I did it because I couldn’t stop doing it. I couldn’t leave

It was then that he decided to create an animal reserve to help stray dogs. Since then, he has saved hundreds of animal lives.

A full-time paid staff of 23, including three veterinarians and many volunteers, work at the sanctuary. It is estimated that each month the sanctuary helps around 800 dogs.

They have a 24-hour service to help the most needy animals and carry out all kinds of sterilization and vaccination programs.

To date, Leslie estimates that she has cared for nearly 4,000 animals, including dogs, horses, pigs, sheep or monkeys. He has had over 36,000 clinic visits, found homes for 840 animals and performed over 3,500 rescues. Undoubtedly a clear example of love towards animals.