Man Who Lost One Of His Eyes Adopted A One-Eyed Kitten. Both suffered but now they accompany each other 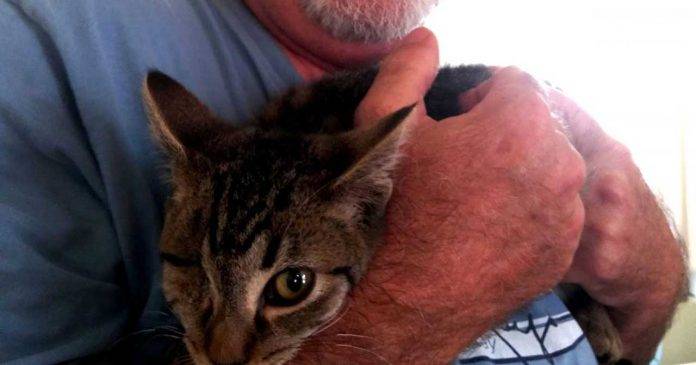 Killer came to the life of Larry Scott (USA) by surprise: neither he nor his wife were looking for a cat without an eye, but when they saw him in the local shelter, they did not doubt that he was the chosen one.

Just as there are people who are made to be our better half in life, there are also animals that can become our companions in life and experiences.

This was the case for Larry Scott, 62, of Marion (Ohio, USA). In 2015, the man lost one of his eyes due to a traffic accident, for which he also suffered multiple brain hemorrhages and had to learn to walk again.

In May 2020, his wife’s 20-year-old cat passed away, so they decided to adopt another cat in early September. And as if it had been written forever, the kitten that they took home also has only one eye.

“We really weren’t looking for a one-eyed cat, but my wife said, ‘Look at him, we have to adopt him,’ and I said, ‘Okay.”

The little cat had arrived at the shelter for 3 months, very ill and with an ugly bacterial infection in his eye. For this reason, it had to be surgically removed.

However, that did not stop him from behaving like what he was when he arrived at his new home: a 3-month-old kitten. Larry and little Killer — as he baptized it, despite the fact that his wife disagrees

— live an active life, full of frolics and scenes.

“My wife wants to name him Mr Love, but I am not going to call him that. I’ve been calling him Killer, because he plays with the toys like he wants to kill them. He’s a lot of fun, he’s been around for about two weeks now and he’s settled in very well ”.

Larry even says that Killer is so active that he probably doesn’t know about his handicap, since at 3 or 4 months he “plays like he has no more time in life. He has no idea he only has one eye. “

This meeting was a great match for both of us, and let’s hope it’s long-lasting and of quality!