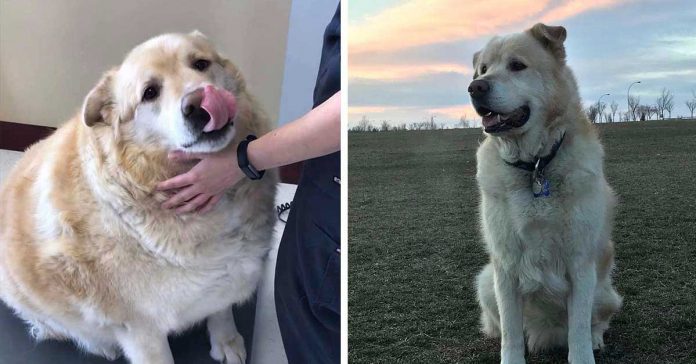 Kai is a beautiful little dog who changed his lifestyle forever after being abandoned by his adoptive family in a shelter where he would be euthanized due to being overweight.

Kai is a beautiful Golden Retriever who was abandoned in a shelter by the people he loved the most in the world. There he was going to be euthanized because he could barely walk due to weighing 173 pounds, but a kind-hearted woman and a vet decided to save him.

The vet refused to euthanize him because he knew that Kai only needed to lose weight to live a healthy and long life, for her part, the woman named Pam Heggie who is also a nurse met this beautiful puppy and immediately felt the need to help him, she She was willing to raise him on a strict diet and exercise routine.

Pam says that the first day Kai got home, it took him 20 minutes to climb three stairs and into her house.

Dog loses 100 pounds in one year thanks to love

This dog’s lifestyle change started slowly, first taking short walks three times a day in which he only managed to move five to ten steps before taking a break.

“He could walk a few steps and then he would gasp and lie down. It just made me cry.”

Although it wasn’t easy, Pam and Kai never gave up. Kai began to show noticeable changes after exercising in the water, this helped him to strengthen muscles and increase his range of motion, little by little the walks were longer and faster.

Kai frequented dog parks and the people there encouraged him to fight his overweight. After a great effort, this adorable dog started running and jumping again.

“People could have given up on him, but he never gave up.”

After spending a year doing this routine, he reached his goal and lost 100 pounds, his weight is now 73 pounds.

Kai seems like a new dog not only because of his appearance, but also his personality managed to emerge, he plays with the other dogs and Pam cannot imagine a life without him so she decided to provide him with a forever home.

This dog is very happy, now he spends his days in the company of his canine brothers waiting for them to open the door to go out to the park.

Kai has his own Facebook page and the following message was shared there:

“Oh, I have made great progress and although there was a failure along the way… I am very excited to announce that I now have a FAMILY FOREVER!! I’M HOME”.