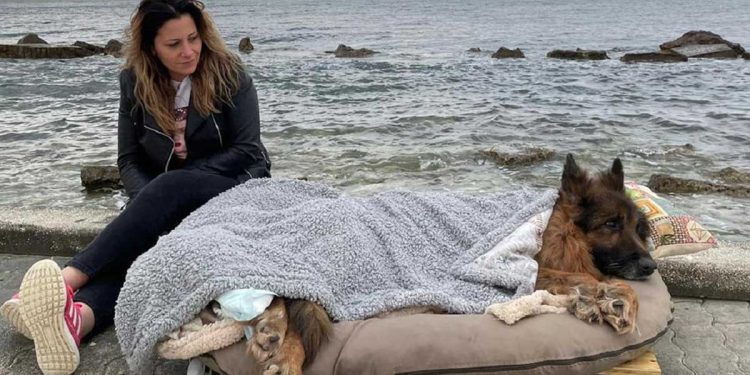 A pet is much more than just a companion: after many years by your side, it becomes an inseparable friend, an additional family member with whom you can go for a walk, eat and even chat! So, it’s no wonder that the moment of separation is always a bit tragic and painful, like all separations. Whether it’s a cat or a dog, doesn’t matter – it’s the love that connects us with them that matters. And so, when we feel that our pets are nearing the end of their days, we try to give them all possible comfort. We don’t want them to be completely alone in their final moments. That is why Gianna Serena Manfredi, volunteer member of the “Qua la zampa” rescue dog squadron, wanted to give Heart, a cute German shepherd dog who has been paralyzed for some time, a nice last moment.

It is known that German Shepherds often suffer from diseases of the spinal cord and not infrequently run the risk of ending up with paralyzed hind legs. This is known as degenerative myelopathy, which can completely affect the function of the dog’s hind limbs. Unfortunately, this is exactly the sad ending that Heart, a sweet and meek puppy, gradually experienced after being abandoned by his family after moving to a new house. Those who found him immobilized on the street immediately alerted the canine rescue group “Qua la zampa”, which came to his aid. Fortunately, the volunteers intervened in time and Heart survived. However, the disease did not allow him to survive very long: within a short time, his front paws were completely paralyzed, and gradually the rest of his body was also.

Heart is the name they gave him as a symbol of his broken heart after he was abandoned. Fortunately, the animal lived at the shelter for a full year, surrounded by the pats and affection of the volunteers. Gianna Serena Manfredi wanted to give the dog a last moment of calm and serenity by the sea. She took him for a walk along the seafront, thanks to a mobile bed designed for this type of situation. “I wanted him to feel loved,” said the woman who works for the well-being of her four-legged friends.

The last moments of Heart, the dog with the big heart, lay before the waves of the sea. A moving moment, but also a happy one because he gave the dog one last chance: “It was a really calm and happy moment for Heart. For a few hours he could forget the pain he had suffered from people who did not love him or the fact that he could no longer walk like other dogs and was trapped in his own body. I gave him some fresh water so that he could enjoy the smell of freedom, ”concluded Gianna, visibly moved.