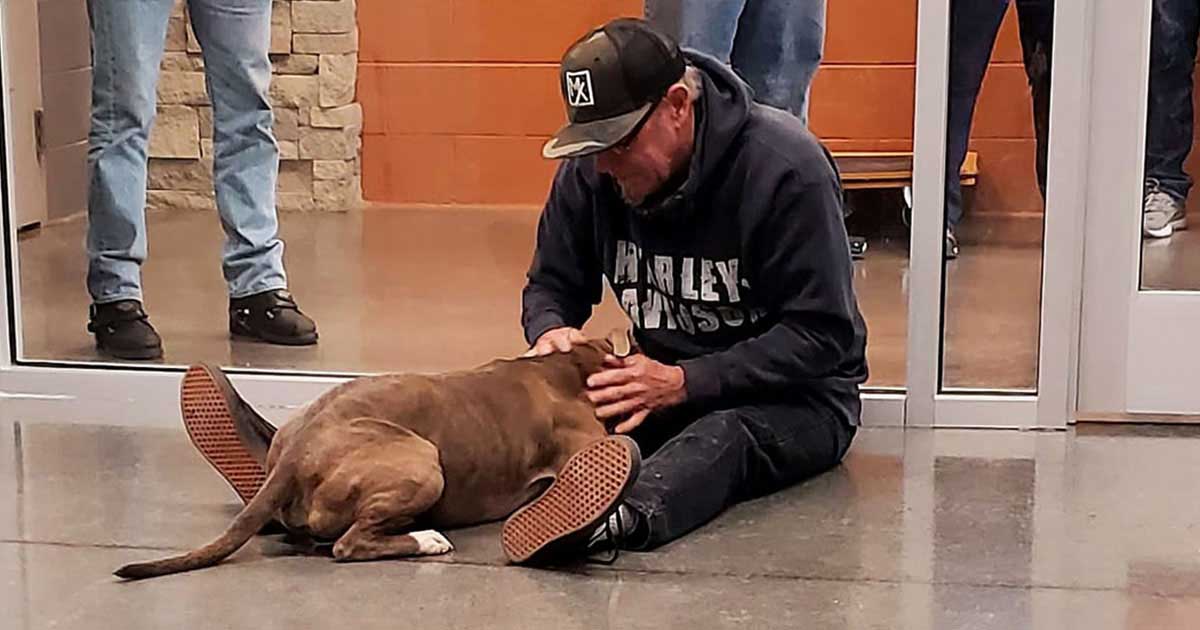 In a shelter there was an adorable reunion between a dog and its owner, the beautiful reaction of the dog captivated everyone.

Pat had been looking for his dog for months, but it didn’t get good results, luckily a friend found him in a shelter, and the touching reunion was recorded in a cute video that was shared on Facebook by the Washington County Animal Shelter.

Six months ago, Pat had a job offer in Texas, so he needed to move out as quickly as possible. Just a few days before moving in, her dog Blue was unexpectedly lost and although she looked everywhere for him, she couldn’t find him.

Beautiful reaction of a dog when reuniting with dad

The desperate man called all the local shelters, but did not hear from his friend, the clock was working against him because it was time to move.

Pat knew that if he didn’t find his dog before he left, the chances of finding it would be very slim, but he had no choice.

So, the man moved to another city without knowing anything about his best friend, but deep down he hoped to find him.

Several months have passed since Pat last saw Blue, but he still dreamed of receiving information about his friend.

The dog had shown up at a stranger’s home looking for a safe place to rest, and an animal control officer brought him to the shelter. No one knew how long Blue had been on the streets, but he seemed to love everyone he came across.

Tammy Davis, executive director of the shelter told The Dodo:He was a carefree dog. He was a bit shy at first, and he didn’t like all the other dogs around him very much, but he was extremely affectionate with people and very affectionate with the staff.

Due to the COVID-19 pandemic, the shelter had to close its doors to the public and visits were made by appointment only. So Blue was waiting in his kennel for months. Until the shelter finally wanted to introduce Blue to some potential adopters, and posted a video of Blue playing with his favorite toy on his Facebook page.

A little over six months had passed, when Pat received the miracle call, he had been waiting for. A friend of his had seen Blue.

I saw a dog at the Washington County Animal Shelter that looks a lot like Blue.

Accompanied by this message, the friend sent him the video of the dog so that Pat could see if it was his friend Blue.

Pat jumped out of his seat in excitement and immediately contacted the shelter to verify that what he was seeing was true. When he spoke to shelter staff, he gave the exact description of his dog and they sent him photos and videos that claimed the dog went by the name Blue.

Then, they agreed to schedule the moment expected by all; Pat had no doubt that it was his beloved dog.

So, the man got into his car and traveled more than 1900 kilometers in the company of a friend, to meet his beloved dog again.

After 13 hours of travel, he arrived at the shelter and the employees of the place recorded the moment when the dog saw his father after more than half a year. Blue was euphoric and excited, he kept waving his tail and moving around.

Through tears, Pat approached his friend, stroked him and hugged him tightly while saying several words in his ear.

Hello my friend, how are you? Did you miss me as much as I miss you? This is my boy.

The video of the moment went viral and quickly garnered thousands of views and hundreds of comments from users who were moved.

After the two of them were able to calm down, Pat took his dog to his truck and they set off for their new home in Texas.

We don’t have many happy endings like this. There were a few tears, tons of dog kisses and lots of smiles.

Blue’s happy face when he left with his dad is priceless; only a dog can express emotion without saying a word.

This is the best story we’ve had in a long time and it’s because of things like this that we never give up. We are happy that the dog we named Bones is back with his father and ready to catch up.

Blue will surely continue to receive a lot of love from Pat, and we are sure that they will never be separated again.