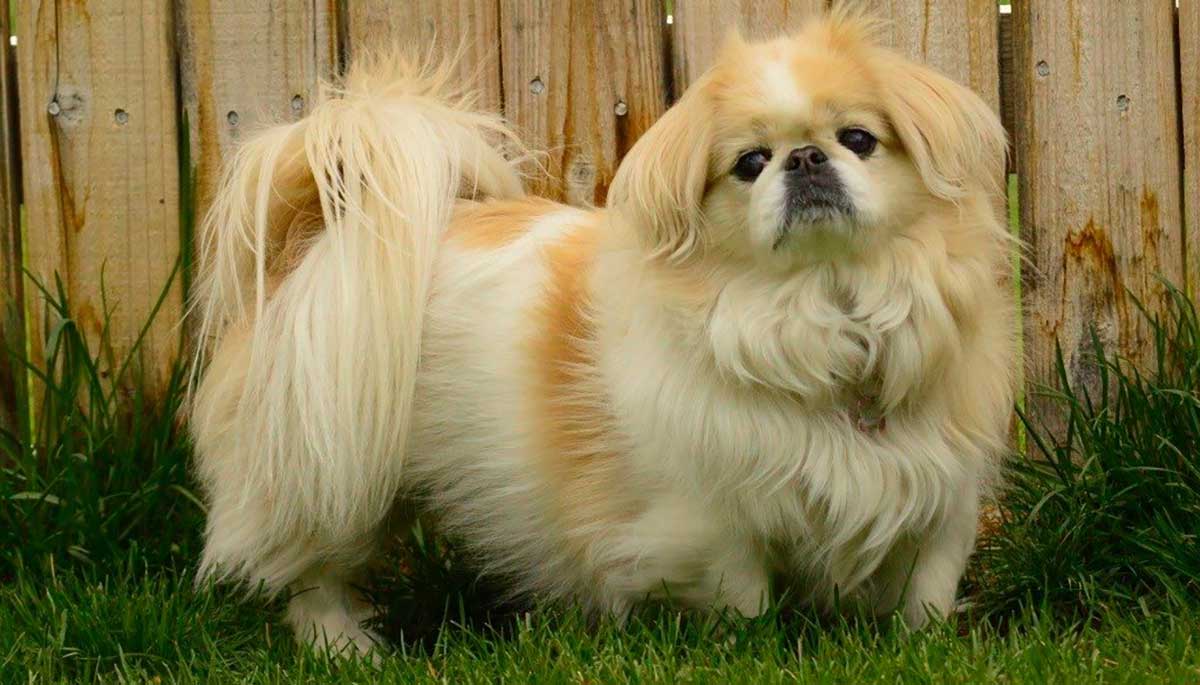 The Pekingese is one of the most striking dog breeds, thanks to its fun appearance and lovable character. Fun, active and familiar, this dog is also intelligent and sensitive. All this makes training easier, even if he is a bit stubborn, so you have to be patient with it. In addition, he is brave and angry, which can cause him problems if he is not socialized as a puppy.

The Pekingese is a small dog with a flat nose and the appearance of a lion. He was once considered a sacred dog and part of Asian royalty. Currently the Pekingese is very popular in practically the whole world.

If you wish to adopt a Pekinese dog, it is important to inform yourself in advance of its characteristics, the character it usually has or the behavior in its adult life.

In this ‘ Pets Feed ‘ breed sheet, we will explain in detail everything you need to know about the Pekingese dog.

Characteristics of the Pekingese

The Pekingese is a small dog, small but surprisingly robust. In proportion, it is wider than it is tall and shows a large head covered with fur which gives it the characteristic appearance of a small lion. It also highlights a large and very black truffle, and small shiny round eyes; in addition to a short snout and heart-shaped ears that fall on either side of the head.

It is a compact and heavy dog, very wide at the front. It also shows a high tail with lots of hair, which it keeps on its back, and strong legs, tilting outwards in the event of a forehead.

The size of the Pekingese generally does not exceed 25 centimeters at the withers, a very small size for its weight, which is about 5 kilos and makes it very corpulent for its size. It is not easy to wear it despite its size, because it always surprises its weight and body, unlike what happens with most breeds of similar size.

In addition to its robustness, the coat is another of the most remarkable and exotic characteristics of the Pekingese, which requires very specific care to show all its splendor. The coat is very long and has a dense undercoat, an imposing mane up to the shoulders and funny whiskers that grow from the jaw downwards. Thorough brushing will be necessary constantly and frequently to avoid the appearance of knots or hairballs, which are really difficult to remove when they form.

The hairs are a little rough to the touch, with the exception of the undercoat, something that can be controlled with specific products to increase the softness of the coat. With regard to color, any color is authorized except the albino or liver color. In all cases, the colors must always be well differentiated, and generally a black mask is sought which contrasts with the shade of the coat, although the standard does not indicate any type of mask.

The majestic dignity, the personal importance, the trust and the obstinacy of the Pekingese unite to form a happy, affectionate and kind dog that will respect you if you respect it.

The temperament of these dogs is very characteristic of the breed. The Pekingese is a loyal dog and very brave despite its small size. However, he is also independent and reserved. This little Chinese dog does not socialize as easily as dogs of other breeds.

He is generally very loyal to his family, but suspicious of strangers. The Pekingese is an excellent pet for seniors and families. It can also be a good pet for new owners.

Health and diseases of Pekingese

Like many other breeds, the Pekingese is known to suffer from some hereditary health problems that are worth knowing if you plan to share your home with one of these energetic little dogs. The diseases that seem to affect the breed most are:

However, by regularly going to the vet and providing quality care, we can quickly detect any problem and enjoy a healthy dog ​​for a long time. Beijing’s life expectancy is more than 11 years, although it is increasing year after year thanks to advances in veterinary medicine, food and health care.

We must never forget the importance of respecting the vaccination schedule in order to prevent serious viral or bacterial diseases, as well as regularly monitor the internal and external deworming of the dog.

Pekingese is ideal for keeping in an apartment or in a house. On the outside, this decorative dog will suffer, he needs comfortable conditions, warmth and coziness. According to the rules, the pet must be allocated a place to sleep and rest and not allow the animal to sleep on the sofa or the master’s bed. In the case of the Pekingese, this rule is ignored by most owners. These cute little dogs often sleep near the owner.

Often you do not need to walk a Pekingese, he does not need much physical activity. The decorative dog quickly learns to the litter box. This dog himself does not show a desire to walk outside, especially if it is cold there. Heat is also contraindicated for these pets, because of the thick coat, this little dog can easily get heatstroke if you walk with it under the scorching sun.

There are almost no difficulties in keeping a Chinese dog. It is worth noting only that, due to the abundant shedding, there will be hairs throughout the apartment. This can be avoided by taking proper care of the luxurious Pekingese coat. From puppyhood, you need to teach your pet to hygiene procedures:

The Pekingese does not need a lot of exercise. It usually takes two daily walks of 15 to 20 minutes, which can be short or moderate, and low play time. In general, the Pekingese is a quiet dog who prefers to spend time without much activity. However, it is important to take it for a walk to socialize, in addition to giving it physical activity.

The amount that your adult dog eats depends on its size, age, complexion, metabolism and level of activity. Dogs, just like humans, do not need the same amount of food. It goes without saying that a very active dog will need more food than a sedentary dog.

The quality of the food you buy for the dog also makes a difference: The better the quality dog ​​food, the more it will feed your dog and the less you need to refill your dog’s bowl.

The Pekingese responds well to high quality dog ​​food, whether it is manufactured commercially or prepared at home with the supervision and approval of your veterinarian. Any diet should be adapted to the age of the dog (puppy, adult or older).

The Pekingese is a sturdy and stocky dog ​​that is a little heavy when raised, but should not be fat. Keep your Pekingese fit by measuring its food and feeding it twice a day.

Because of their stubborn nature, raising and training Pekingese is not easy. It is necessary to start raising decorative dogs almost from the first days of life.

At the same time, the punishments are completely ineffective, you only need encouragement for obedience. Rough treatment during the upbringing period will lead to the fact that the pet will withdraw into itself and generally refuse to accept commands.

Even to train a Pekingese to litter box is not that easy. It will take more than one month to get used to the rules of behavior in an apartment. All difficulties related to the upbringing and socialization of the dog must be overcome, otherwise the small pet will behave as he wants.

Although the Pekingese is considered a versatile decorative dog that suits almost any person, it is worth thinking carefully before the final decision whether such a dog is right for you. To do this, check out the main pros and cons of this breed.

Origin of the Pekingese

This may not be the way the Pekingese was born, but it’s a good story. The breed is really old, with DNA tests that confirm it as one of the oldest dog breeds. It is believed that the Pekingese has existed in China for 2,000 years. Named for the capital of Peking China (now Beijing), they were companions of nobles, princes and members of the imperial family.

The Pekingese was a dog revered by Buddhist monks in China, because their physical characteristics have some similarities with the lion of Fu, a mythical animal of the Buddhist tradition. For this reason, the dogs were supported by royalty and only the nobles could have a Pekingese in their possession, such was the devotion for this breed, which sometimes even had human servants.

In 1860, during the Second Opium War, Anglo-French troops looted and burned the summer palace in Beijing shortly after the Chinese Emperor Xianfeng fled. Fortunately, before they burned it, they saved (or rather captured) five Beijing dogs living in this palace. These five dogs were taken to England, where they were given to nobles and aristocrats. One of them has even arrived at the hands of Queen Victoria of England.

These five dogs were the parents of the current population of Pekingese, because the other dogs from China died or were hidden by the population, without any proof of their offspring. Subsequently, in the United Kingdom, the sponsorship of the breed began and its popularity has continued to grow until today.