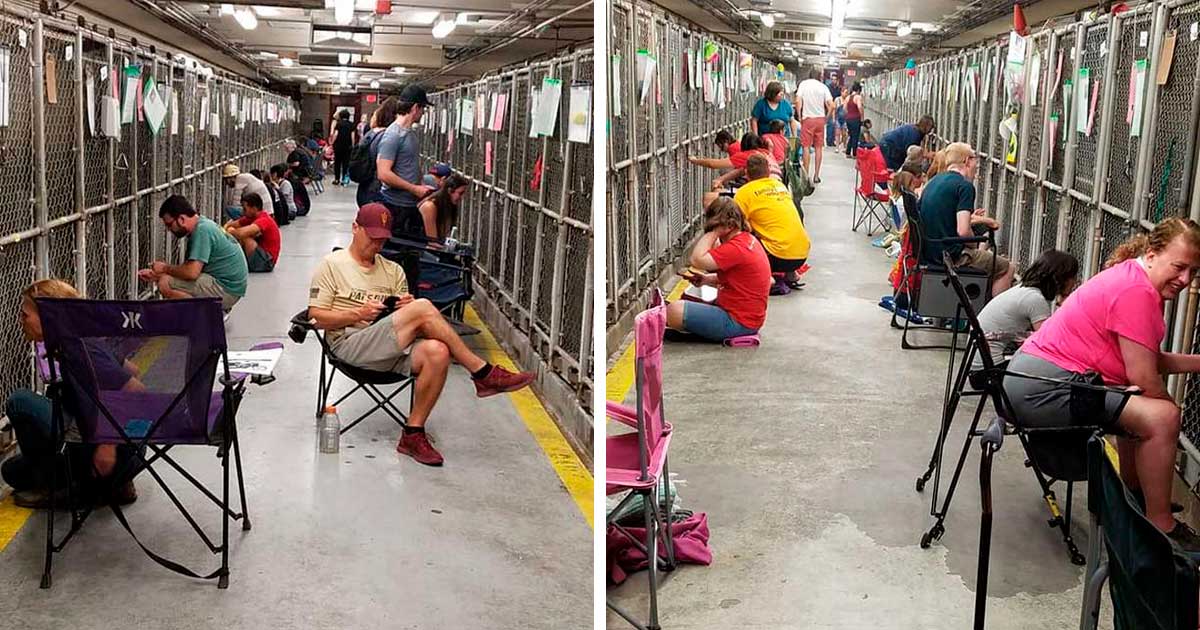 More than 100 people accompanied the dogs from a shelter during the July 4 fireworks in the United States,

As millions of people across the United States watch the July 4 fireworks, some residents in an Arizona town end up in a completely different place: an animal shelter.

Fireworks can cause our furry kids to huddle under the bed or even run in the streets and get lost (many dogs go missing on July 4 for this very reason).

As for shelter dogs, they can only curl up on their own in their cages until the fireworks are over. But a shelter had a brilliant idea to help these homeless animals relax on vacation.

People accompany dogs from a shelter during fireworks

The Maricopa County Department of Animal Care and Control has a program called “Calming Companions,” where they invite the public to their shelters to sit with the dogs and cats. The constant loud noise of fireworks can be a terrible experience for animals, and even more so in the crowded conditions of a shelter.

Last year, more than 300 people from the community showed up at the shelter’s two locations in Phoenix, Arizona.

Ben Swan, director of development for the shelter, said in a press release:

It was overwhelming to see how the community responded. It really helped spread our message that MCACC is here to help.

Shelters can be a very stressful place for animals. When you add the loud noises of a fireworks explosion, that makes them even more anxious. We ask ourselves, ‘What can we do to make tonight as quiet as possible for them?’

The Maricopa County Animal Care and Control Department is used to the chaos that 4th of July celebrations can bring. Dogs frightened by the noise of fireworks may flee, leaving their family fearful for their safety and well-being, and they often end up being taken to these shelters. This leads to one of the busiest days for shelters and their staff.

We expect it to be a busy day, unfortunately a lot of people leave their dogs outside and those loud noises and explosions make them dig under fences, sometimes fences jump, we have heard cases of dogs jumping out of windows, all for fear of those loud explosions.

Last year these wonderful volunteers brought their own chairs and blankets to sit on while they read, played music, and entertained the dogs. Shelter staff provided treats, toys, and games that helped keep the cats and dogs occupied, and the joint effort made for a great experience for everyone involved.

Young children read their favorite storybooks to the dogs, while other people came with guitars and ukuleles to play on them.

Some visitors simply offered gentle comforting strokes for a few hours, and that made all the difference.

We could see how people talked to the dogs and stroked their fur, their eyes getting heavier and heavier. Many lay down right on the edge of their kennel and fell asleep. That says a lot about how important human touch is to those animals.

Volunteers sang and read stories to the dogs

Normally the shelter allows volunteers to walk and play with the dogs, but the staff found that their kennels were the safest places for the dogs to be that night. Fireworks can often trigger an escape response in dogs, so after 7pm each dog was settled in their kennel.

Although the event was something of an experiment at the time, the shelter will employ the same routine for the upcoming July 4 and New Years Eve.

As it turned out, the event had other super positive impacts that went beyond just one night.

Many participants developed long-lasting relationships with the shelter, provided a foster home, adopted a pet, or volunteered.

MCACC works tirelessly to care for the animals in its community, helping these animals reunite with their families, and finding new homes for homeless animals. If you are looking to adopt, volunteer, or help in another way, get in touch with them.