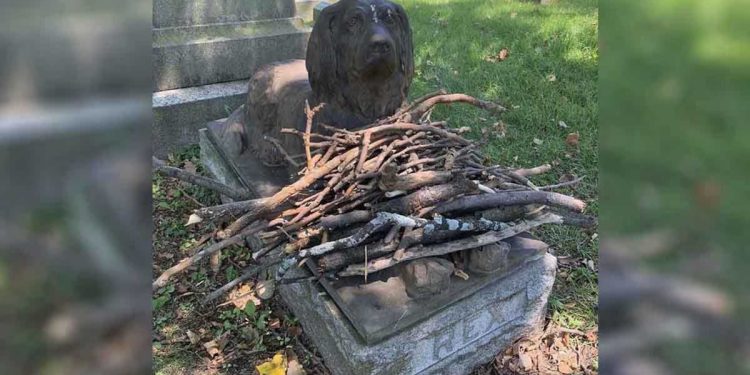 The Green-Wood Cemetery in southern Brooklyn, United States, has a large number of famous people in its fields; even characters from the Civil War, but there is one inhabitant who gets all the attention.

Among the countless statues of angels and decorative figures is the bronze image of a dog named Rex, who appears to guard the grave of its former owner for over 100 years.

It is believed that the dog’s father was a former fruit merchant named John E. Stow, who died in 1884. Many visitors to the cemetery made a practice of picking up branches and laying them at the feet of the faithful dog.

When it comes to Rex, he obviously stands out. People see it from the road; It’s a sort of prominent place, right next to the intersection of two roads.

Due to the COVID-19 pandemic, the place has become an escape for those who want to enjoy nature, and since these visits have increased, so has Rex’s stick collection.

It’s right under a tree and there are a lot of sticks. People drop a stick on its little paws. Someone also left a picture of a dog there once, maybe of theirs. little pet that’s passed away, as if to say, “Rex, take care of my little one.

The 478-acre cemetery is also home to other pets besides Rex. Before the cemetery board of directors outlawed animal burials in 1879, many other faithful companions were buried alongside their beloved humans.

Among the Green-Wood records, dating from the 19th century, there is a note that tells of the location of a bronze statue of a dog, it is still unclear whether Rex is really buried next to its owner, but people like him believe that this is so.

There is another dog sculpture that has a similar mysterious story but is a little more out of the ordinary. And they usually give him toys.

Rex’s sculpture, and the thousands of gifts visitors usually leave as a tribute, show us that a dog’s love will definitely last forever.