Released From A Solitary Cell, This Pit Bull Clings To His New Mom To Keep Her From Leaving 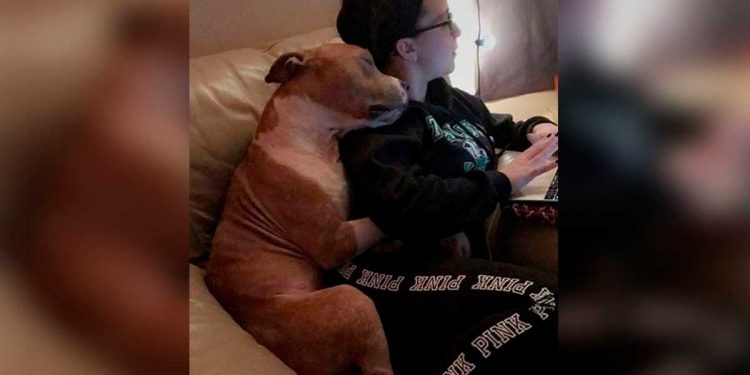 Kayla Filoon has decided to adopt a beautiful dog named Russ and he is really adorable; he always wants to be with her. A friend of the woman snapped a photo of the beautiful moment Russ snuggled up next to her and it went viral on social media.

Kayla Filoon is a 20-year-old woman who has devoted much of her time to homeless dogs. Last year, she volunteered at the ACT Philly shelter in Philadelphia as a dog walker and through that she met Russ, a 4-year-old pit bull, who stole her heart and later became a member of his family, recently a photo of this woman with her newly adopted dog went viral on social media and is a prime example of her adoptable beauty.

At first, Russ didn’t look the best, but that didn’t interest him, a big connection emerged between the two.

He came in like a stray dog ​​and he had been really beaten up. He was missing fur on his tail and ears; he was also very skinny and I was told he weighed around 40 pounds when he entered the shelter.

She knew from the first moment that he had something special.

He was sitting there calmly, looking at me. And I thought, he’s adorable! I have to take it now.

When the woman came back later to check on Russ, he had barely moved.

He was sitting in the same position as before; he was calm while the other dogs were barking and causing a commotion.

Kayla interacted with the dog for about 45 minutes, but it only took her 5 minutes to completely fall in love with him.

He was very nice to me, even when we walked into the yard. He seemed like a very nice dog and he didn’t bark at any of the other dogs.

She realized that Russ knew some basic commands like sitting, so he probably had a home before he came to the shelter. When they returned from spending time together, the dog returned to its crate and the woman called her mother to let her know that she would have a new member in the family.

I said, ‘I think I have to adopt a dog tomorrow. My mum thought I was joking, because I always fall in love with the dogs I go out with, it’s hard not to, so she doesn’t m didn’t believe, but there was something about Russ.

Besides making Kayla happy, it was a huge relief for the shelter to know that one of their dogs had found a home, as they recently had to put 15 dogs down.

Any dog ​​had the potential to be euthanized, especially the sick ones, and Russ was definitely one of them. He had kennel cough.

Kayla had class the next day, but as soon as she got out she went back to the shelter to take Russ for a ride in his car.

He sat in the passenger seat. I thought, ‘He’s the perfect dog.

After the walk, she knew she couldn’t go home without him and she adopted him.

I took him home that night.

It took Russ a little while to get used to the new surroundings, and he needed plenty of sleep as he was still recovering from the kennel cough, but it didn’t take long for him to start loving his new life and his new human mother. . “He must always be near me,” she said.

One night I was sitting on the chair, doing my homework, and he was trying to find a way to hold me. There was another couch available, and he had his bed on the floor, but he didn’t want to be anywhere else. . So it eventually settled down, and when I look down I’m like, ‘Oh my God, look at him.’

A friend of Kayla took a picture of the woman with the dog and uploaded it to her social media, going viral.

I was worried that when I brought him home his attitude would change. But he’s still the same kind of relaxed, laid back, snuggled up dog, he’s probably one of the most grateful dogs I’ve ever had. seen.