This Pit Bull Refused To Be Adopted Without Her Best Friend 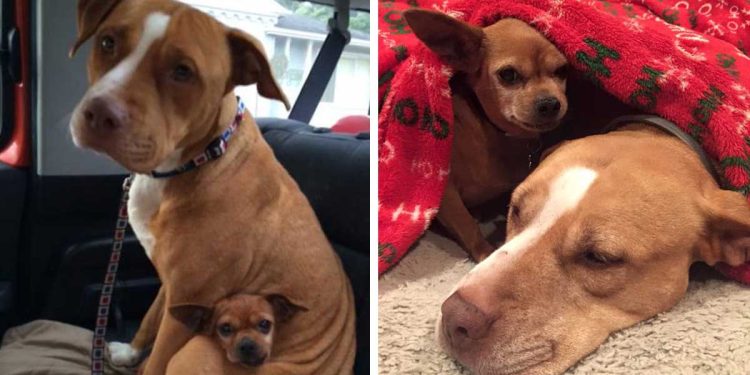 Merrill and Taco are completely different, but they complement each other perfectly, they met in a shelter and immediately had a great affinity, Taco took care of Marrill after he had surgery and since then they have been inseparable, now they share the same house where they receive all the love they deserve.

A beautiful pit bull and a chihuahua showed us that animals can value and understand the meaning of friendship better than anyone. Merrill and Taco were delivered to the Rocket Dog Rescue animal shelter in 2014, the pit bull had a terrible uterine infection and had to undergo surgery to save his life.

During her recovery, Taco gave her all the support she needed, he was faithfully by her side to protect her and from that moment on they were inseparable.

They are dogs of different breeds, she is younger and bigger than Taco, but that didn’t stop them from having this beautiful friendship that captivated more than one person.

Vets determined the pit bull was about 3 years old when she was delivered to the shelter and Taco was about 8 years old.

He has asthma and only has 4 teeth, which is why he usually sticks out his little tongue, which makes him even cuter than usual.

Although it is difficult to have two dogs adopted simultaneously by the same family, they did, Merrill was going to be adopted, but she refused to leave the shelter without Taco and now the two are now part of a loving home.

These two love each other more than any asshole we’ve ever seen. They cry when they stop being next to each other.

After a month of adoption, the vet discovered that Taco was suffering from heart failure. His family was really afraid of losing him, but thanks to good treatment and a lot of love, his condition improved a lot and, of course, throughout this process he was accompanied by his faithful friend Merrill.

The beautiful relationship this couple has is to be admired and the love they have for each other has also spread to their family. We hope they can be together for many more years.