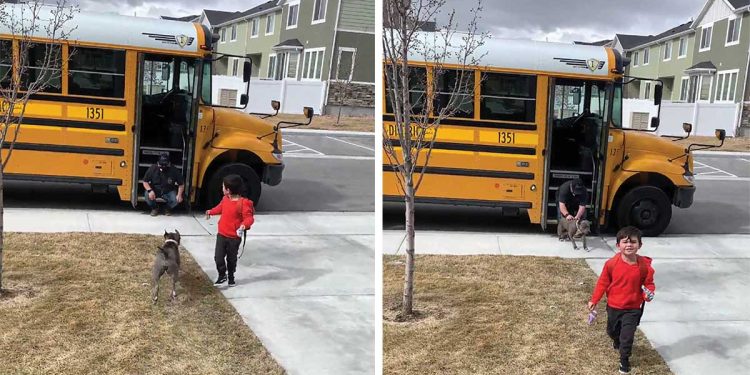 This adorable pit bull thanks the bus driver for bringing his beloved little brother home every day.

Lucy is a charming pit bull who spends her days filled with love for her entire family. And while it wasn’t so easy at first to bond with her new human brother, she eventually found a way to form a great bond with him. Now adorable Lucy thanks the bus driver daily for bringing her beloved little brother safely.

Lucy’s adoptive brother is 5 years old; He still does not speak and suffers from autism spectrum disorder, which makes it difficult for him to interact with the people around him. The little pit bull realized he would need some time to warm up and gave him the space to let things flow naturally.

He did NOT like her for the first year of her life. I think it was too much of a change for him, and he didn’t like her being in his personal space.

A few months ago, Miranda’s husband decided to take their little boy for a walk every day after his day at work and brought Lucy to accompany them. This daily interaction has gone a long way in creating a bond between Lucy and her little brother.

Going daily has helped my son bond with Lucy, so now he loves playing with her, putting his food in his bowl every day and sometimes he’ll pet her.

Lucy really enjoys having fun outside with her favorite person, and soon that interaction also continued as her adoptive brother gets on the bus to go to school.

The charming pit bull looked forward to the mornings with her little brother, when he had to leave for school and that’s how she finally met the bus driver.

One day she ran on the bus to follow her brother, and that’s when he officially met the bus driver. Then every day he walked down a few steps from the bus for Lucy to say hello.

Turns out the bus driver was a pit bull lover, so he was also very happy to meet the adorable Lucy. Eventually, this interaction turned into a gentle routine between man and dog.

Every morning, Lucy waits patiently with her little brother for the arrival of the bus, she greets the driver and still waits for them to come back at the end of the day, to go run around her brother and of course the nice driver.

For her mother, Lucy’s interaction with the driver is a way of saying thank you for taking care of her brother and getting him home safe. The adorable pup seems to understand that his brother is a little different and welcomes any gesture of love towards him.

Although the wait can be a bit boring, the friendly pit bull doesn’t seem to care and her excitement is evident when she feels it’s time for her sibling to return.

For Lucy, her family is very important and she is content with her little routines, like accompanying her little brother and saying hello to the bus driver.

She immediately starts whining and waits by the door. I always ask her to wait (because of the manners) until the bus driver helps my son off, and as soon as I say “OK” she runs to him for quick hugs and then comes back to me like if she said to me, ‘Mom! He’s there ! It’s really him!’ Then she comes back for longer caresses.

You can enjoy the adventures of Lucy and her family by visiting her Instagram and TikTok accounts where her adoptive mother posts updates.