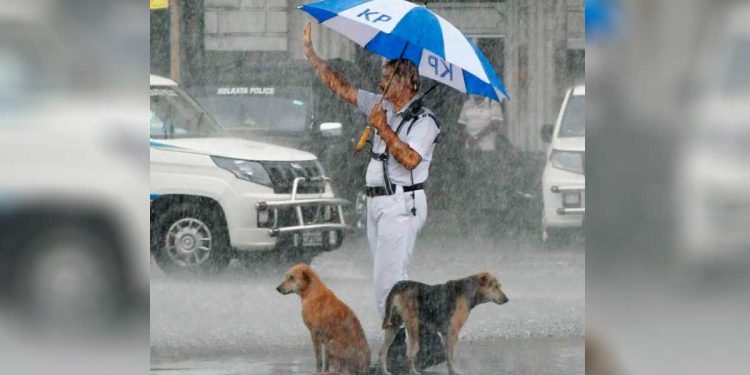 Heavy rains have been hitting the streets of Calcutta in India, prompting people and animals to seek safety in the midst of the storm to protect themselves. So, in the midst of all this, for Sheriff Tarun Kumar Mandal, it is a natural action to help those who need it most.

A few days ago, while Tarun was monitoring traffic at a busy seven-way junction, the sheriff received unexpected company. Two sweet homeless dogs, who were enduring the inclement weather, saw him in the middle of the street and did not hesitate to approach and stay next to him.

As he continued to do his job, Tarun offered the two dogs’ shelter under his large umbrella. A passerby who saw the moving scene snapped a photo of the little act of kindness and immediately shared it on social media.

The image touched the hearts of thousands of people around the world. And the look on the faces of the helpless homeless dogs says it all.

India has an exorbitant number of homeless animals, with an estimated 35 to 40 million stray dogs. It is one of the highest populations in the world in a situation of abandonment.

The truth is that there is a long way to go to help these abandoned animals. For their part, the Calcutta police try to intervene when there is a dog that needs help to be rescued or just wants a warm place to rest.

Of course, this officer’s gesture with the two grateful homeless dogs was a small respite that surely meant the world to these defenseless animals.