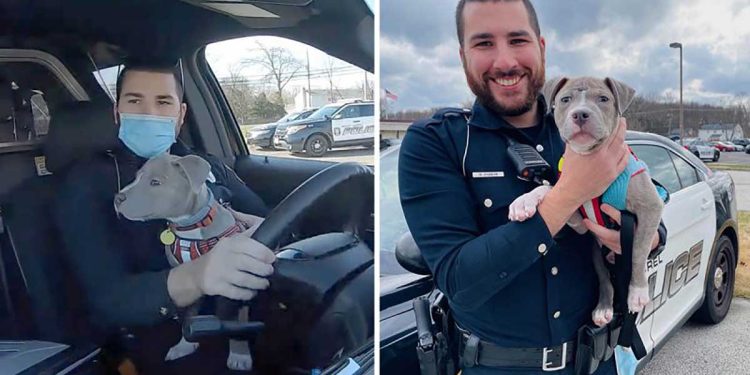 Police officer Matthew O’Hanlon of the Mount Laurel Police Department in New Jersey (United States) decided to adopt an abandoned pit bull puppy near an industrial estate in early January. The adorable little dog the officer decided to name Thor had a cut on his head when his companions found him.

Thor was transferred to the Burlington County Animal Shelter where he would receive treatment and care for the little cub. But Officer Matthew had made up his mind; he wanted to take him home. The officer says his last dog was a pit bull and assures us that they are loving companions despite the stigma they have.

My fiancee and I were looking for a pit bull, and when you see a pit bull puppy with an injury, it’s hard to miss it.

Through their social media, the Mount Laurel Police Department asked their potential family to come forward, but no one approached.

The officials of the refuge could not find the family either because the little one was not microchipped.

Officer O’Hanlon was tasked with bringing the approximately 3-month-old cub to the animal shelter, but it didn’t take long for him to decide to adopt sweet Thor.

Everyone keeps asking what happened to the puppy we found on January 2nd… well he has a new home with one of the agents who rescued him. Officer O’Hanlon adopted him right away and made sure he got plenty of attention and treats. Little Thor is recovering well and has found his loving home forever!