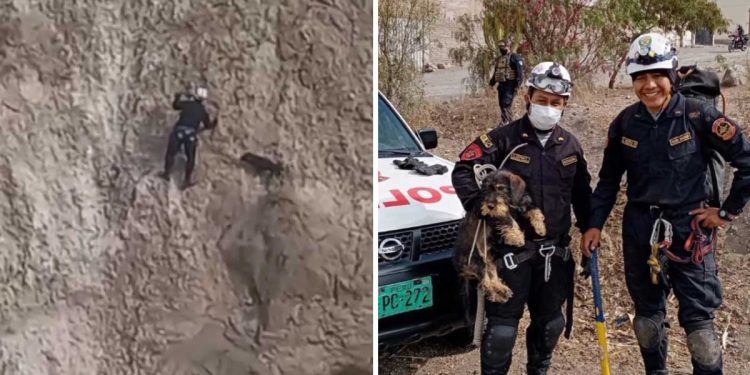 The officer put on a hiking suit to get to where the trapped pup was. If he hadn’t arrived in time, the outcome would have been fatal.

When puppies are abandoned, they have to face different complex situations in which their life can be in danger, whether due to extreme cold, heat and lack of food and water. Also, they have to sleep in dangerous places, like highways or desolate places.

But it is more dangerous if it comes to areas that the dogs do not know very well, since several dangers can cause them serious accidents. For example, when it comes to ravines with too high falls.

It happened in Arequipa, Peru, where a dog was trapped in an 80-meter-high ravine, according to local media El Informativo.

Apparently, the animal was so disoriented that it fell a few feet down the ravine to an area where it could hold on. However, the place he was in was very narrow, so any missteps would cause him to fall into the void.

At this height it was almost impossible for the puppy to get out alive, if he had the misfortune to lose his balance and fall.

Some people spotted it in the distance and realized it was a puppy. They immediately called the local authorities so that they could save him. A team of Peruvian police rescuers arrived at the scene, who with climbing equipment, such as helmets and ropes, tried to get him out of there.

After a few minutes of operation, the officers managed to get to where the dog was trapped and were able to rescue him.

What caught our attention was that the puppy knew very well that they were going to rescue him, since a few seconds before the policeman took him in his arms, he kept moving his tail to one side to another with great energy.