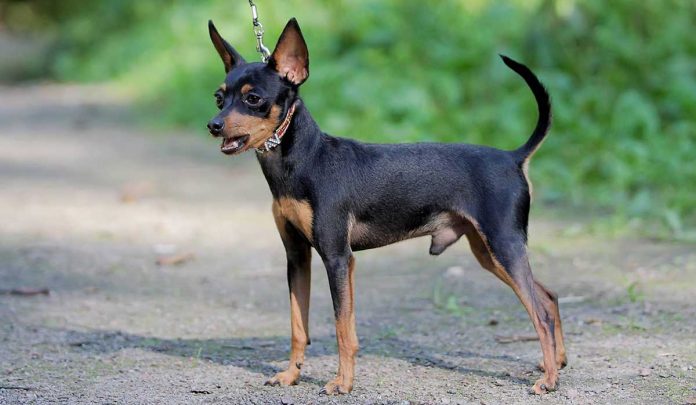 The Prague ratter (Pražský Krysařík) is the pride of the Czech Republic. His small size, pleasant character and boundless dedication make this dog an ideal companion and friend.

This small dog was in the past an unrivalled Czech rat hunter, in the present – a miniature pet with developed companion qualities.

The Prague ratter has long been considered a ladies’ favorite, not surprisingly, because you can take small, complacent animals with you everywhere.

The birthplace of the Prague ratter is the Czech Republic. The exact time at which the breed appeared is not established, nor is it clear how it happened.

Naturally, because of rodents as vectors of infections, the plague broke out in Europe at the end of the 13th century. To pacify the epidemic, it was necessary to get rid of the infected rats.

The cats could not help, as they were exterminated at the request of the Inquisition. Cats have been captured and burned as witches’ helpers. To combat rodents, special people were appointed – rat hunters, but their work was ineffective.

It was then that the Prague ratters came to the rescue. Nimble and miniature dogs skillfully coped with rodents and helped rid the cities of this scourge.

In ancient times, Prague ratters lived in barns and stables, catching rodents there. Then the representatives of high society found other uses for dogs. The Prague ratters have tasted the food to avoid poisoning their hosts.

Some owners allowed animals to walk directly on tables and taste food. The first information on the Prague ratters’ dates back to the 8th-9th centuries.

When the decline of the Czech state came, warlords began to meet not only in the homes of nobles. Now dogs were kept in the homes of the middle strata of the population and even in the backyards of the poor.

With the growing popularity in Europe of entertainment such as rat fighting, the popularity of Prague ratters has also increased. After all, they have become permanent participants and frequent winners of these contests.

Later, miniature warriors became the favorites of secular women. They have become indispensable participants in ladies’ salon meetings. Faithful pets accompanied their mistresses everywhere, without causing problems during the journey.

At the end of the 19th century, serious work began to preserve the purebred. Studbooks have been compiled. But after the hostilities (two world wars), the archives of the breeding work were lost. The new history and revival of the Prague Rattle breed began in the seventies of the twentieth century.

At the start of the 21st century, rats gained popularity outside of the Czech Republic and Slovakia. But the number of these dogs across the continent is limited. There are such pets in the territory of the former Soviet Union.

The physique of the Czech chamois is harmonious, square, miniature. Adult weight is about 2.6kg, height is 20-23cm. Prague ratters whose height at the withers is less than 18 cm are disqualified.

A pear-shaped head is held along the middle length of the neck. The ears are quite large and strong. They have a triangular shape. The forehead is slightly convex, rounded, without wrinkles. The eyes are not too big, rounded, dark. Slightly convex.

The muzzle is quite long, without skin folds, dry. The nose is pigmented. The jaws are developed, the bite is scissor bite.

The back is straight, short, the croup is slightly inclined. The kidney is strong. The stomach is raised. The rib cage is oval.

The limbs are straight, parallel, well-muscled. The hind legs may be slightly longer than the front legs. Rounded “cat” legs. The movements are free, elastic. The tail is straight. While walking, running, the Prague ratter carries it above the back line, half-ring bending is allowed.

The coat of the Prague chamois can be of two types:

The main color of the Prague ratter: brown and black with tan, red. The tan should be shiny, not fuzzy. Other colors are permitted according to the standard. The richer the color, the more valuable the Prague ratter.

Despite its small size, the Prague ratter has a quick wit and a balanced character. He is a faithful friend, a faithful companion.

He will not miss any opportunity to be close to the owner, so he is the perfect companion. You can just put the Prague ratter in a hard bottom bag and go to the store or on a sightseeing trip. At the same time, you cannot call the Prague ratter obsessive.

If the dog sees that the owner is busy with something, he won’t care, demanding attention.

Unlike many other small breeds, the Prague ratter never makes noise in vain. But if he knocks on the door, he will instantly notify the owner of the arrival of guests with a loud bark.

He is wary of strangers. If he notices any suspicious behavior on their part, he may rush to defend both the owner and his territory. Familiarity doesn’t allow this, so don’t immediately try to stroke the warlik. You need to befriend him first.

It is better not to leave such a small dog with young children. Children can inadvertently injure a fragile animal.

The Prague ratter is friendly with other dogs. He also develops friendly relationships with cats. This is not surprising, as both are natural rodent hunters.

Keeping the Prague ratter in the same house with hamsters, chinchillas, squirrels and other small animals is not recommended. The dog reacts to it like prey.

On average, a Prague ratter can live 12 to 14 years. Representatives of the breed are distinguished by good health and strong immunity.

To maintain the health of their pet, the owner must show care and attention. It is important twice a year to show the dog to a veterinarian for a preventive examination, to carry out a deworming, to make the scheduled vaccinations and treatment against skin parasites on time.

Representatives of the Prague Rattle breed most often have the following health problems:

The Prague ratter is only suitable for residential premises. Such a miniature dog needs comfort, warmth. Long daily walks are not necessary for the warrior. It can meet its natural needs on a litter box or on a special diaper. It is very easy to get the Prague ratter used to this.

Walks are still needed for the Prague ratter. He loves to walk, to play in the great outdoors. During the cold season, a short-haired animal should be dressed. During natural precipitation or severe frost, windy, it is better to postpone the walk. If the weather is nice, try taking your dog for a longer walk.

The Prague ratter likes to lounge on the master’s bed or on an armchair, but he should have his own place, his own bed. You can buy an entire doghouse. Also provide the dog with various toys. Buy him clothes, a harness, bowls for water, food, care products.

This small Czech dog is easy to care for. The main thing is to do all the procedures on time and in accordance with all the rules:

In miniature dogs, the metabolism is accelerated. This animal does not need a lot of food, but the food should be of the highest quality. Most Prague ratter owners prefer artificial feeding, purchasing high-quality ready-made feed.

But you can feed the Prague ratter with natural products. At the same time, it is important to correctly formulate a diet, determine the norms and choose the right vitamin and mineral supplements. You cannot overfeed the dog, otherwise he is at risk of obesity. It is also forbidden to feed her with leftovers from the table.

The puppy must learn the rules of behavior in the house. You have to teach it the simplest commands: “place”, “no”, “mine” …

Thanks to his quick wit, the Prague ratter can successfully engage in agility, racing, freestyle. Some representatives of the breed have proven themselves even for follow-up work.

The Prague ratter is a sensitive person. Therefore, it is important to socialize him as early as possible, getting him used to the street, to parasitic sounds. After the first vaccinations, after quarantine, immediately start walking with the puppy and classes.

The main purpose of a modern Prague ratter is to accompany its owner everywhere. This companion dog is able to brighten the life of the elderly, become an irreplaceable companion of elegant beauty or be a fun play partner for a schoolboy.

It seems that the Prague ratter is a universal pet that is suitable for everyone, without exception.

In fact, before buying a Prague ratter puppy, you should familiarize yourself with the rules of maintenance, feeding and care. If you can provide the dog with everything you need, feel free to come to the kennel. But first, study the main advantages and disadvantages of the Prague ratter breed

Prague ratters have successfully passed the standardization procedure in many dog ​​organizations, but are still not recognized by the FCI.

The vast majority of dogs have retained the hunting instincts of their ancestors, so when they see mice, hamsters and other rodents, lights of excitement light up in their eyes, signaling that they are ready to go. to beat.

Regardless of the size of the toy, Prague ratters feel free to play the role of apartment keepers, informing the owner of the arrival of guests with a weak but quite loud bark.

Czech warriors love to make hiding places, and not just edible, so if you haven’t been able to find your favorite bobby pin in a long time, you should look around the animal’s house or shake the basket it sleeps in.

The breed exists in short-haired and medium-haired varieties, but there are significantly fewer representatives of the second category.

Prague ratters are fairly athletic dogs that are good at agility and freestyle.

These compact babies love to be the center of attention, while the forced loneliness negatively affects their psyche and behavior.

In recent years, among fans of the breed, mini Prague raters weighing up to 1.5 kg and reaching 18 cm are especially mentioned, however, the way of exhibitions for such individuals is closed.