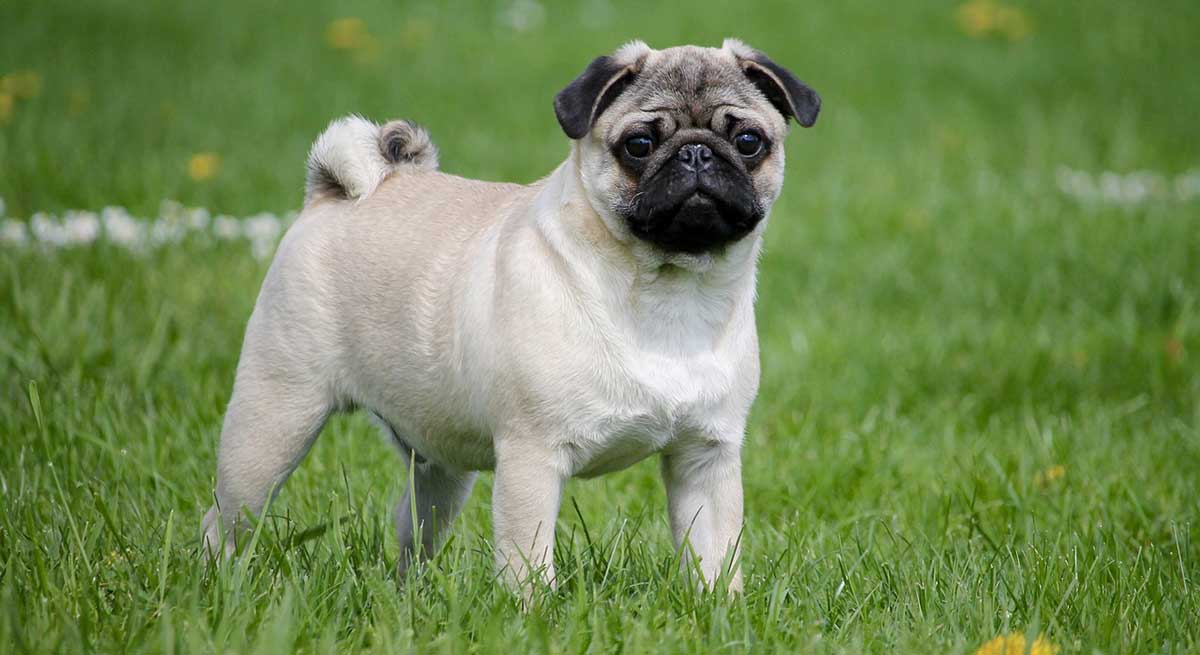 The pug is a small dog, which attracts attention, first of all, by its appearance, in which stands out its dark face and its flattened nose. It is one of the brachycephalic dogs, an anatomical conformation associated with certain health problems.

This pug must be in constant company as they are very playful and if they are alone, they can develop separation anxiety. This is why it is not recommended to adopt it for families with very young children, since they cannot receive all the attention they deserve. But with slightly older children, there is no problem with pugs, but quite the contrary, because they are very affectionate and sociable animals.

The pug is an amazingly generous and benevolent dog that has long been kept in its place. Fun, a little awkward and just plain funny, they have a lot of fans. They are especially loved by children for their openness and liveliness.

Many people do not understand how their wrinkled muzzle, capable of making pretty grimaces, cannot touch them. Despite the fact that pugs are quite miniature in size, they are considered the largest among all small dog breeds.

In this ‘ Pets Feed ‘ breed sheet, we explain everything you need to know about the pug.

This breed of dogs is distinguished by charm, nobility, intelligence.

Physical characteristics of the pug

It is a short, chubby and compact body dog. Despite being a small dog, the pug is a muscular animal. The upper line of his body is level and the chest is wide. The head is large, round and without imprints in the skull. It is not apple-shaped, like in Chihuahuas, and the skin that covers it is very wrinkled. The muzzle is short and square. The pug’s eyes are dark, large and globular in shape. They are bright and their expression is soft and worried. The ears are fine, small and of velvety texture. They can come in two varieties:

The tail is high inserted and rolled up, as tight as possible, on the hip. According to the standard of the International Cynological Federation (FCI), double winding is highly desirable. The ideal size for the pug is not indicated in the FCI breed standard, but these dogs are small and their height at the withers is generally between 25 and 28 centimeters. The ideal weight, indicated in the breed standard, ranges from 6.3 to 8.1 kilograms.

The pug’s coat is fine, smooth, soft, short and shiny. The accepted colors are: silver, apricot, light fawn and black. The muzzle, moles on the cheeks, the rhombus on the forehead and the streak (a line from the occiput to the loop of the tail) should be black.

The pug has the temperament typical of a companion dog. He is affectionate, cheerful and playful. He has a strong personality and likes to attract attention, but he is stable in nature.

These dogs are easy to socialize, and tend to get along well with adults, children, other dogs, and other animals. However, although they are fun, they do not resist intense games and pranks of young children. Of course, in order for them to get along with strangers and other pets, it is important to socialize them with puppies.

In general, these dogs do not exhibit behavioral problems, but can develop separation anxiety with some ease. The pug needs constant companionship and can become a destructive dog when left alone for a long time. They should also exercise and receive mental stimulation so as not to get bored.

The pug is an excellent pet for most people and families with older children, and even for novice owners. However, this breed is not recommended for families with very young children, as they tend to unintentionally treat small dogs. They are also not good pets for people who spend most of the day away from home or for very active people.

With their adorable and happy nature and their need for affection and camaraderie, the Pug is an excellent dog for families looking for a large dog with a caring attitude. They like to travel or stay at home because they are happy when and where they are with their family. Their whimsical appearance and their nature make them difficult to resist.

You might think, looking at pugs, that they are passive little creatures who like to lie down and eat different goodies. But this is far from the case!

The pug is prone to developing brachycephalic syndrome, characterized by changes in the shape of the nose and the walls of the nostrils, due to which the dog cannot breathe normally. The syndrome can be exacerbated by the obesity of the pet, being in a too humid or hot place. In some cases, the health of the pug is under serious threat, which is why it needs to surgically correct the structure of the nose.

The breed is also susceptible to inflammatory brain diseases. Unfortunately, the prognosis is not always favorable. Due to the disease, the dog may develop seizures, which can even end in coma and death.

If a pug has a damaged vertebral part (which, by the way, is also more common in representatives of this breed), then this will be noticeable by the pet’s altered gait. Only surgery can help.

It is also not uncommon for dogs to experience orthopedic problems. For example, some animals suffer from necrosis of the femoral head. Because of this, the unfortunate pug cannot step on its hind leg when walking. Also, the dog can be struck by a disease of the hip joints. However, in this case, they do not need the help of a surgeon (unlike large breed dogs).

Pugs can also suffer from toothaches. Due to the special structure of the dog’s jaw, damage to the teeth can even occur.

Pugs are emotional! They are overwhelmed with delight if you caress them or work out with them.

Pug care has some differences due to its anatomical and physiological characteristics. The owner should be attentive and caring in relation to his pet, but sometimes – show inflexibility and firm character.

Since the pug is prone to obesity, it should not be overfed. Do not give them sweets and do not fall for the cute face that these dogs can build, begging for treats.

Special attention should be paid to trimming the nails, especially for puppies under 6 months old. If the procedure is not carried out on time, the dog’s limbs may not form properly.

Examine the pug’s eyes carefully, as they are susceptible to the development of various diseases. A timely noticed ailment will help prevent serious health problems.

It is necessary to take care of the coat by combing with a stiff brush. You shouldn’t wash your dog often. Instead, you can wipe your pet’s body with a loofah-glove dampened in warm water, or use specialized hair care products. Keep in mind that the folds of pugs also require careful maintenance, as a large number of bacteria collect between them.

The pug doesn’t like heat, so try not to physically overload this breed in hot weather. These dogs welcome walks, but not too grueling. They are not made for long runs, long walks, or serious endurance exercise. In cold weather, wear a jumpsuit on your pet, in which it will look even more attractive.

Paying more attention to the pet, the owner will feel one hundred percent return in his love and devotion!

The Pug only needs half an hour of daily exercise, but he will enjoy spending the day with his owner and accompanying him to run errands. Avoid exercising in the summer during the hottest hours and do not leave it in the car in hot weather, as the pug may have breathing problems.

When composing a diet for your pug, choose only solid foods. The dog’s stomach is not adapted to eating liquid foods.

The animal’s diet should be based on raw meat: lamb, beef, chicken.

Do not be afraid to give your pug the legs and neck of a bird, raw bone dissolves easily in the stomach of a pug, but you cannot give boiled bone.

Under the influence of gastric juice, it breaks down into sharp plates that can injure the walls of the organ and the intestines.

Milk should also be in the pug’s diet; he drinks it when he feels heartburn in the stomach.

Combine boiled and raw meat carefully, the dog may refuse raw meat in favor of boiled one.

The lack of salt, which animals in nature choose from the blood of their victims, fill up with herring pate, but in small quantities.

With natural feeding, you should not give a lot of porridge.

When using dry food, stick to one brand and always keep a bowl of water, pugs always wash down the prepared food.

The Pug is a very active, energetic and determined dog

Since pugs are smart but stubborn, there are some peculiarities of their training. They don’t like monotony and repetition of the same actions. They are able to fool around during training, because of which an inexperienced dog handler can be a lot puzzled.

Punishing a pug during training is not worth it. He will definitely be offended and will stop executing commands altogether. Act through encouragement and praise – they love it. Those who are ready to please their owner or who want to get a treat, will sincerely try.

In order for the upbringing of the pug to be as successful as possible, they need to be dealt with from the moment he appears in the house. The most important period is the first 6 months. If not enough is done during this time, it will be very difficult to teach and retrain the pet.

Another feature of the breed: small pugs have difficulty controlling their stomach. Don’t be unnecessarily nervous, just be patient and persistent. Over time, your pet will learn to go to the toilet properly.

The Pug breed has many benefits that make these cute dogs so popular:

Many people are confused by the wrinkled face of pugs, so not everyone immediately believes in the friendliness of these animals. But, according to the owners of the representatives of the breed, it is difficult to find more open and sincere dogs. They are incredibly charismatic, capable of cheering everyone and everyone with their funny little face and slight awkwardness. Therefore, those who want to see a faithful, unrecognizable, positive friend or companion next to them can safely acquire a pug.

According to the official version, the country of origin of the breed is China. Scientists suggest that it originated in the 5th century BC and descended from miniature mastiffs.

The characteristic short and wide skull shape could be due to mutations resulting from inbreeding, often practiced in the past.

They appeared in Europe in the 16th century, thanks to the Dutch sailors. The so-called “Chinese Mastiffs” quickly gained popularity among the upper classes. The breed soon spread throughout Europe. English breeders have done significant breeding work, as a result of which the animals have become more compact and muscular, but compared to today, they are still more refined, with long limbs and a muzzle.

In the 19th century, pugs of Chinese origin were brought back to Britain, characterized by their short stature, stockiness and short muzzles. They were mixed with the European subspecies, which was the beginning of the emergence of individuals of the modern type.