Puppy Found In Dog Food Bag Is Adopted By Rescuer 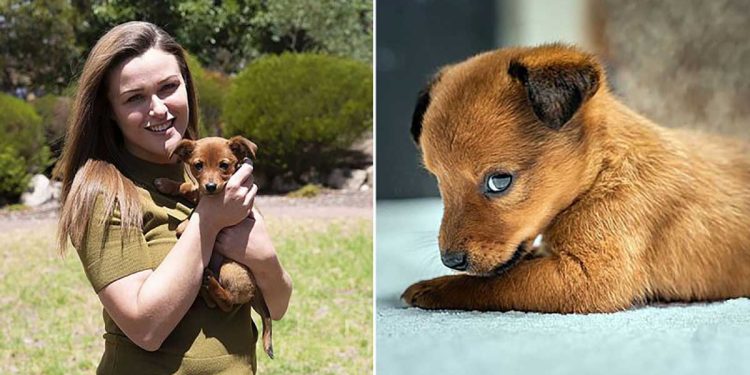 A puppy found with his 7 brothers and sisters, locked in a container and inside a food bag, is adopted.

A puppy was found abandoned in a dog food bag, along with 7 of its siblings. Nicole Olsen and her daughter Harper found the puppies when they heard several squeaks from a container at a truck stop.

The incredible event happened on November 1 of this year as they passed between Wigley Flat and Kingston in Murray, northeast of Adelaide, Australia.

Heeding the moans, Nicole opened the lid of the container and found two 20-pound bags of dog food stacked on top of each other.

Puppy found in container with siblings

The bags were sealed with a wire used to hang clothes, and inside were the puppies that needed urgent help. As Nicole returned from a family event in Renmark, she decided to call in her family members to help rescue the puppies.

The little ones seemed to be in bad shape. They were full of parasites and fleas, and obviously the purpose of their abandonment was to keep them alive. Her family members answered the call and divided the children into three vehicles to take them to Nicole’s home in Gawler.

The two sickest puppies were wrapped in towels and rubbed the entire way to keep them aware and be able to help them.

Once back home, they contacted RSPCA South Australia, who collected the puppies and rushed them to a veterinary clinic. Unfortunately, one of the sickest died on the way, while the other had to be euthanized due to his poor health.

The remaining six puppies, three males and three females, were all infested with fleas, parasites and dehydrated, for which they were treated urgently.

The RSPCA chief inspector said according to the Daily Mail:

This incident is at the height of cruel treatment of animals. These puppies were found by pure chance, and we have no idea how long they were there.

The inspector added that the person who did this did not want any of the puppies to survive as he had left them in extreme conditions. When they were found, the temperature was 25 ° C, which turned the concrete container into a hellish furnace for the little ones.

Unlike humans, dogs cannot sweat and just gasp and release heat through their paws and noses. Therefore, being cold was almost impossible for the little ones who were inside the food bags and inside a container.

After RSPCA volunteers cared for the six surviving puppies until they were healthy, the good news began to arrive.

Nicole and her family decided to adopt Angel, who unlike other puppies, is the only one red and full of love.

He was the youngest and seemed to be having a hard time, so we all had a soft spot for Angel.

She added that her family wanted to adopt all of the puppies, but that was not possible, so they decided to adopt at least one.

Angel will now live with Nicole, her husband Michael, their daughter Harper and a 10 year old family dog ​​who loves other dogs.

We are all determined to give Angel the best life a dog can have; we feel blessed to have it.

The dogs that managed to survive this incident were adopted by several caring families and are now in their new home.

Thanks to this family’s timely response, the adorable puppies were able to get a second chance at their lives and learn what true love is.

The animal welfare organization will continue to investigate further to find those responsible for this cruel event.

It really is impossible to believe that anyone can do this to eight vulnerable puppies, and we urge anyone with information on who may be responsible.

Under South Australia’s Animal Welfare Act, abandoning an animal is a felony punishable by up to two years in prison or a fine of $ 20,000. However, conviction of this fact could lead to harsher penalties, since the circumstances resulted in the death of two of the puppies.