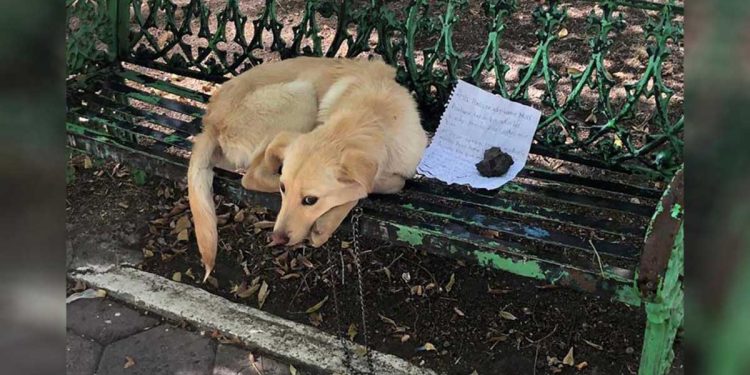 A very shy puppy is abandoned on a bench in the central park of Coyoacán, Mexico, accompanied by a touching letter.

The case of an abandoned puppy tied to a bench in a Mexico City park was reported just days ago on social media. The pup had a note next to it explaining why it was there.

The letter, which seemed to be written by a child, explained that he had decided to leave him on this bench because his family mistreated him and he could no longer bear the situation. Marcela Goldberg, a member of the animal protection society Pets Coyoacán, received a message about the case of this puppy and left with her partner Azul Galindo.

Several neighbors were already gathered who brought him water and food because they left him tied to the bench with nothing. But they couldn’t come near because the puppy was terrified, growling and baring his teeth.

Puppy left on a park bench next to a letter

The note that was next to the nervous puppy supported by a stone read:

The nervous pup growled and had his tail tucked in his paws as he stared at the people in dread.

I was wearing protective gloves so I could approach with more confidence, but it was still difficult. We contacted a trainer experienced in aggressive dogs who observed the situation via video call and gave me instructions until until we manage to pass the loop [over his head] and cut the other chain.

After a few strokes and after cutting the chain, the 7-month-old puppy was a little more receptive to the woman; He was still scared, but he wasn’t growling anymore, and by the time they got to the foster home, he was calm.

The dog now named Boston has slowly learned to trust people and his sweet and playful personality is taking hold.

Fortunately, Boston’s story captured thousands of hearts who learned about it via social media, and many people applied to adopt it. Now, the shelter has to choose among many candidates the ideal family for the puppy.

Pets Coyoacán thanked the great support and reminded people on its Twitter account that the shelter has other animals that also need homes.