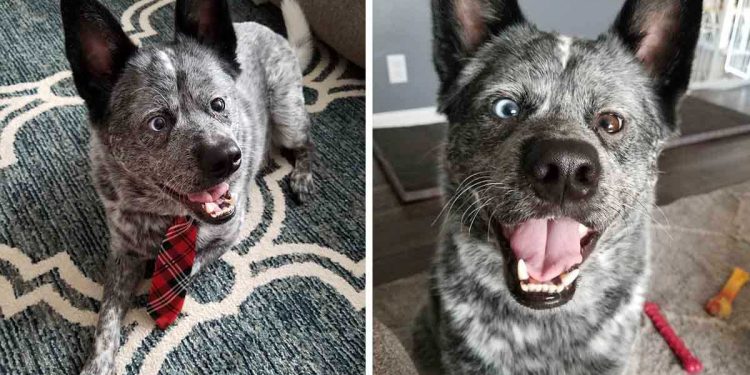 Moose has some serious health issues, but he’s stolen everyone’s hearts with his adorable personality. Without a doubt, he is an example of life.

Moose is an adorable Australian Shepherd that Jennifer Osborne, from Ohio, found in a pet store while waiting for someone to decide to try him out. This woman advocates the adoption of dogs regardless of breed, but when she met Moose her main fear was that someone might abandon her because she is missing part of her brain and has a rather peculiar appearance.

The wife and her husband completely fell in love with the dog.

Despite having a crooked nose as well as his underbite and eye issues that include “cherry eye” among other factors, he is very nice to everyone and that’s mainly why he stole. his heart.

Moose has had health issues since he was 6 months old, and Jennifer thinks it’s because his nose pressed into his skull while he was in the womb.

Moose also suffers from seasonal allergies and in 2018 he started having seizures which affected his body and brain, leaving him shaking and foaming at the mouth.

Since then, the dog has taken medication to control the seizures.

According to UNILAD, Jennifer explained:

Shortly after we had Moose, an MRI showed that [he] had no forehead, no sinuses, missing parts of his brain, especially the part that helps him feel, and a cyst in his brain where the deformity is.

The front of his brain is also crushed and the seizures may get worse. Still, her neurologist doesn’t think it will shorten her life.

Moose’s condition made him lovable and distinctive, with different colored eyes like British musician and songwriter David Bowie.

The bite of the dog shows his lower teeth, looks like he is still smiling.

Jennifer decided to make an Instagram for Moose and there she uploads stunning pictures of him, posing for the camera like a star, even with accessories such as glasses and ties.

This adorable dog has received lots of love from Jennifer, who is proud of him.

It’s amazing and a blessing in my life. He’s the happiest dog I’ve ever met and I’m grateful he’s my dog.

Although his brain is not fully developed, Moose is shown to be quite intelligent, has an overwhelming personality, and is fond of everyone, much like he enjoys playing with his toys which he prefers not to share with his siblings.

He knows he is the darling of his house and Jennifer considers the fact that he is alive a miracle.

I don’t have kids but he makes me feel like a mother. He’s my boy. He chose me as a human being and I love that.

The woman created an online store full of Moose-related products in 2018 to raise money to cover her veterinary treatment.